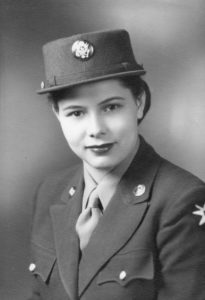 Daughter of Pauline and Jacob Lorenz, Dorothy was born in Billings MT and attended the University of Montana. When the U.S. entered World War II, she volunteered for the Women’s Auxiliary Corps of the US Army. Near the end of the war she met John Masayko at Baxter Army Hospital as they were about to be discharged from the Army. They married two years later in California and settled in Martinez.

She was a dedicated homemaker and took great joy in her family. Dorothy and John were married 61 years, and she was predeceased by her husband. She will be greatly missed by her survivors: daughter Sandra Masayko and son-in-law Justin Fink of Philadelphia; son John Jr. and his wife Ruth Masayko of Antioch; son Robert Masayko of Martinez, and five grandchildren.