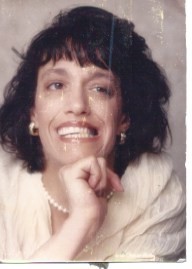 Susie was born May 12, 1957, on Mother’s Day, in Martinez, California to Vincent Salvatore and Dorothy Santina Lucido. She born with cerebral palsy and was the “Princess” of the family. When she was three, it was discovered that she was profoundly deaf, so that element added yet another hurdle for her to overcome. When she was three years old, she began school at Shadelands (Special Education) School in Concord, California.

At the age of 13, she attended Clayton Valley high school. With a personal assistant, she went to all the classes, did the homework, and graduated in 1976, as the first “included” student in their history. She also attended Diablo Valley College, with her mother, side by side, taking classes in psychology, humanities, etc.

After college, she wanted to “go to work.” Since she loved shopping at the Martinez Safeway, she, with the help and encouragement of her mother and the manager of Safeway, Susie was worked as a courtesy clerk. For many years she worked at collecting carts, organizing shelves, and cleaning surfaces. Everyone who came in knew Susie and greeted her with a smile which she returned in abundance.

In 1996, when her mother passed away, Susie left Martinez and came to live with her three sisters in Oregon, sharing time at each house. After living periods of time with her sisters, she chose to live with caregivers Patricia and Roger Williams, their daughter Amber, and other family residents. When they moved to Redmond, Oregon, she eventually moved there too. Susie loved her adopted family who gave her a home of her own and the joy of independence.

Susie loved to travel and would take a plane alone to Portland or Tucson to see her sisters. She took computer classes at the Clackamas Community College and became proficient with the mouse, Facebook, and email. She kept her mind sharp to the end.

Susie was always a role model for courage. Her indomitable spirit, her spunk, her laughter, her love for animals (especially howling coyotes), her refusal to feel sorry for herself, her persistence to overcome her disabilities and to be as independent as possible is a remarkable story in itself. She has been an inspiration for all her extended family–sisters, aunts and uncles, nieces and nephews, cousins, and friends.

She died unexpectedly of a heart attack. Due to Covid-19, there were no services. She is survived by Prudy Bowers of Tucson, Arizona, Linda Stonebarger of Salem, Oregon, Loretta Johnson of Portland, Oregon, and the Williams family, of Redmond, Oregon.