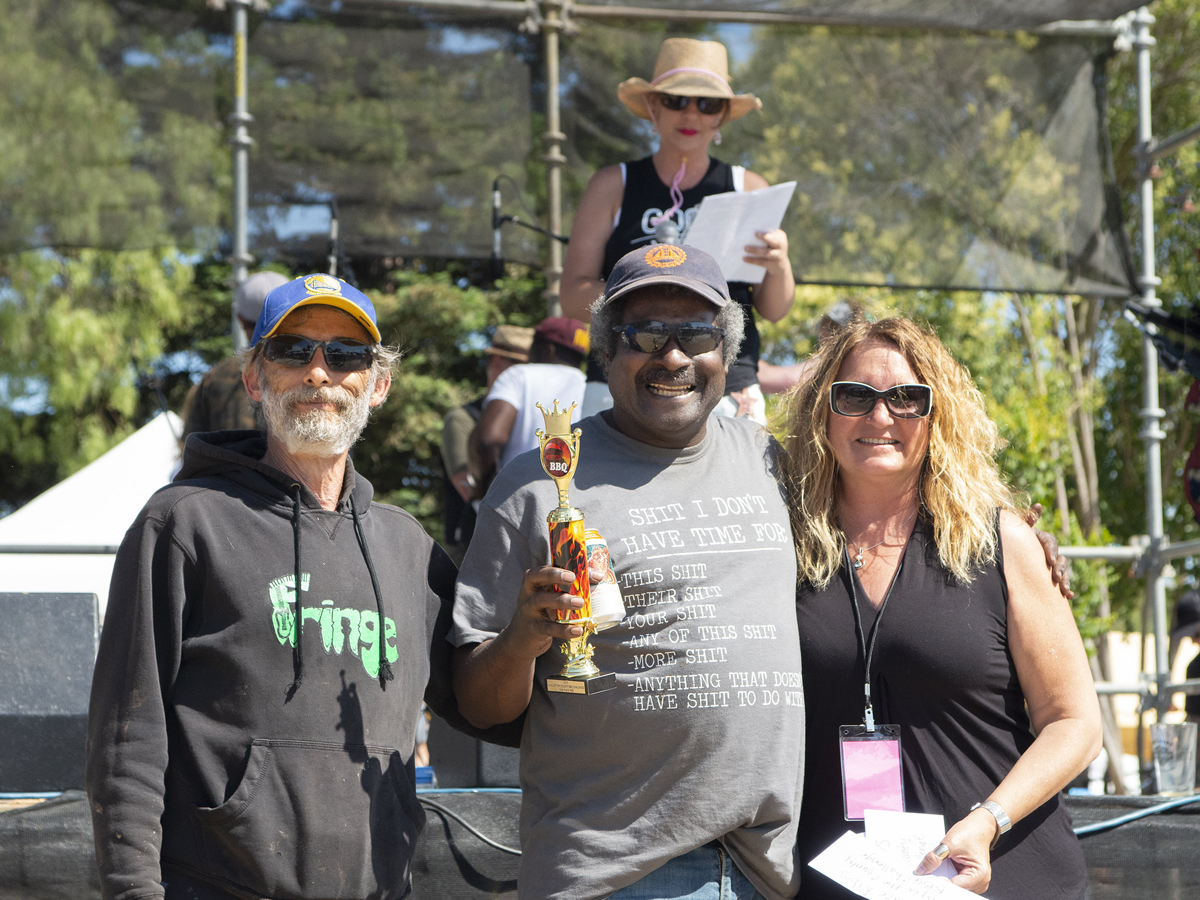 By KEVIN MURRAY
Special to the Martinez Gazette

MARTINEZ, Calif. – The Martinez Chamber of Commerce hosted the King of the County BBQ Challenge & Music Festival, at the Martinez Marina this past weekend. The event was a tremendous success in its fundraising goals and in providing a wonderful weekend of entertainment for Martinez. The second day of the event falls on Fathers’ Day each year and is a great way for families to celebrate together and get dad away from the backyard-barbecue-duty for his day. This meat-fest extravaganza also has a carnival feeling, with rides, vendors, and live music all day long. It’s a lot of fun to attend and rewarding to help as a volunteer.

The Chamber website describes the event as “This BBQ extravaganza and music-oriented event is an all-in-one outdoor family festival, with live music, vendor booths, and of course, the best “finger-lickin” BBQ food around.” That really sums it up! Julie Johnston, President & CEO of the Chamber, was on hand all day for both days, and seemed to be everywhere at once coordinating the processes from her rolling office (AKA golf cart). She even gave me a ride back to my car, when I was done for the day. Thanks!

2019 may have been a record year for attendance. Last year there were demonstrations and disruptions by some animal rights activists, which brought considerable media attention to our local event. And the weather was ideal on both Saturday and Sunday. It’s possible that the media attention from last year combined with the weather drove the King of the County to record attendance.

I spoke with Martinez Police Sergeant Patrick Salamid during the event, about last year’s protest; he said that this year MPD was prepared, and had taken steps to protect the integrity of the show, but also respect the protestors’ rights. Had they showed up, they would have been given a dedicated area for their protest, but not allowed to repeat last year’s disruptive behavior. In the end there was a no-show from the groups.

What impressed me most is the family friendly atmosphere. I saw many kids having a blast, lots of strollers, and many young adults. This is true of the audience, competitors, and volunteers. Some of the vendor and volunteer booths were staffed by three generations of families, having fun together. One of the competition teams, Golden Bear BBQ, was formed by two Cal alums from the Berkeley Business School, there together with their families, competing in all three categories: Chicken, Ribs, and Chef’s Choice.

All categories must be cooked on a natural fire at the event; no advance preparation of the competition items is allowed. The chicken category is open to any type of chicken. Ribs are typically pork, but not specifically limited to that beast – some are spare ribs and some prefer baby back. This year there was one entry of beef ribs. The Chef’s Choice is open to any kind of food, but must be cooked on-site over natural fire-heat. A popular choice was beef tri-tip. Some of the creative entries were a chocolate cake, spicy tostada, a bacon and beef roll, and chicken & waffles.

Michelle Turner, the Community Relations Coordinator for the Chamber, gave me some history on the event. “This was our 13th year. It was started by the Board Members to create a much-needed event in our community and support the Chamber of Commerce. They wanted a BBQ competition that highlighted all the wonderful backyard competitors in our area, with 38 competitors this year! It has grown over the years to include a band line-up for both days, with many from our area. This year we had over 73 vendors from all over Northern California. They all had an amazing experience and look forward to returning next year.”

In the family and volunteer nature of the Chamber, Michelle’s husband Craig Turner worked all day both days keeping things going, and he made a wonderful time-lapse aerial video of the event with his drone camera.

Michelle told me about the great success for 2019. “we had wonderful weather during the event for everyone to enjoy the new Cornhole Tournament, Kids Zone, vendors, live music and of course the best finger licking BBQ around! We would like to thank the most amazing volunteers that came out to support their Martinez Chamber of Commerce.

Laura Philpot is one of the longtime volunteers, and key organizers of the event, not to mention the 2019 Commodore for the Martinez Yacht Club. This very busy lady is a member of the Chamber of Commerce, on the Board of Directors, and was the Chairman of the Board for 2018.

Philpot told me, “I’ve been involved (in King of the County) for all 13 years.” Her husband Brian and his Mom Cindy Shelby have been Table Captains & Judges along with Laura for many of those years. She explained “… being vegetarian, I had Brian take the Kansas City Barbeque Society (“KCBS”) judging class, to fully understand the process of running a KCBS Type competition.”

This year Laura, Brian, and Cindy coordinated the judging panels and Laura handed out the trophies. She described the experience, “It’s a lot of work, but worth every bit of it. It’s great to meet or reconnect with the competitors every year as well as the judges. It awesome to see them when the winners are announced. They cheer each other on like family.”

Congratulations to the Martinez Chamber of Commerce for another job well done and providing a very enjoyable weekend for so many people. Thanks!

Army Sgt Natalie Fejeran was one of the BBQ judges. She is from Texas and claims to cook a mean brisket.

Passion to the Streets President Eve Cameron and Debbie McKillop, of the Martinez City Council pose with the Joltin Joe.

Moraga Fireman David Mazaika, with his daughter turning in their rib entry to the judging station.

Laura Philpot with Curtis Stahle and his son, of the Golden Bear BBQ Team who were delivering their ribs to the judging station.

Julie Johnston, President & CEO of the Chamber, showcasing face painting from one of the vendor booths.