I made an origami market bag last week just for fun. My friends Cathy and Jann came over to my house and we had a lovely time sewing together. Cathy found the bag at a craft fair and wanted to duplicate it. “The lady selling the bags told me how to make them.” Cathy explained. So we looked at the original bag and with the craft lady’s sketchy explanation, made a pattern that worked beautifully.

We three ladies enjoyed morning snacks between cutting and sewing. We had sliders for lunch and then we sewed more bags before a cake dessert. It was a lovely day of making Christmas gifts and spending productive time together with friends. We already have plans for more sew-a-thons in the near future.

Because I am a retired Home Economics teacher, my friends didn’t need to bring anything but themselves (and food) to make our projects. I have multiples of everything! Scissors, thread, needles? I have plenty. Fabric? I have more than I can sew up in a lifetime all by myself. Pin cushions? I am well stocked. I have more tomato with a strawberry top pin cushions than Carter has little liver pills.

“Jann, look at Vivian’s pin cushion!” Cathy said and showed Jann my unusual yet functional pin cushion. I have lots of pin cushions, but I have one very unique, famous pin cushion that I use the most – a dinosaur. Yup. A gnarly toothed dinosaur.

I was up sewing late one night when my children were small. Mothers have to do that, sew at night, because children who are awake ask a lot of questions and have needs that cause multiple interruptions which makes it difficult to sew anything without mistakes. This is especially true if mothers are sewing Christmas gifts such as new pajamas or Barbie doll clothes.

I was sewing downstairs in the family room so as not to disturb the sleeping household, when I realized that I had left my tomato shaped pin cushion sitting on the ironing board upstairs. I didn’t want to risk waking the sweet darlings, so I looked around the family room for something to stick the straight pins in, as my mamma taught me.

My mother was an excellent seamstress and taught 4-H sewing for more than thirty years. She was a real stickler for putting pins directly back into a pin cushion. She was usually barefoot and did not relish the idea of stepping on pins. Heavens to Betsy if she ever stepped on a pin you dropped! Mom would have a hissy fit if she saw someone pull pins and just lay them on the table. Consequently, when I taught sewing, every student had a pin cushion. 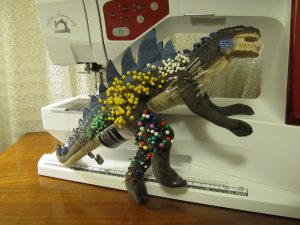 So, that night, I looked around the family room for something to stick pins into. What did I spy? There on the family room floor was one of my son’s toy dinosaurs. It had a grey plastic head and a row of purple plastic spikes running down his back. The blue body and appendages were made of cloth and were firmly stuffed. It was about 10 inches long and fit perfectly alongside the sewing machine. The dinosaur was great for a temporary pin cushion.

Well, as luck would have it, ten year old Eddy found his dinosaur before I could transfer the pins. He picked it up, examined it, pulled a pin out and then stuck it back in. Before I could explain, he exclaimed with a grin, “This is cool!!”

I told him he could have the dinosaur back as soon as I transferred the pins. “You can use it as long as you want,” he offered. So the pins stayed… for twenty-six years and counting.

As a high school home economics teacher I taught cooking, basic sewing, fashion design, and costume design classes. Our costume class made the costumes for the school musical every year. Because there were nine large tables in the sewing room at the school, I often brought large projects in to work on after classes were over for the day.

One afternoon, I absent mindedly left the dinosaur at school. The next morning I found several students surrounding my desk. “What’s up?” I queried as I walked into the room. A girl pointed to the dinosaur. “Cool pin cushion. Where did you get it?” she asked. I told her it was a one of a kind gift (sort of) from my son. They thought that was pretty special.

Teaching sewing in a school classroom is not as simple as you’d think. If everyone thought the same way I did, it would be easy, but that was not the case. For example, if I saw a pair of scissors lying on a table and I needed a pair of scissors, I would ask “May I borrow these scissors for a moment?” and then I would return them pronto. But there are a lot of students out there who, upon seeing the needed scissors, would simply pick them up, walk away with them, and then leave them on a random table when they were finished using them. Argh! A few just felt that if it was there, it was theirs to take, even if it belonged to another student. They didn’t ‘steal’ it. They just ‘used’ it.

I spent a lot of time tracking down, scissors, thread, needles, and pin cushions. I never had to look for my dinosaur. The students always asked permission to touch him, and always brought him back. One day after school three other teachers walked clear across campus to my room just to see the ‘special’ dinosaur their students had been raving about.

The kids loved my dinosaur. The only time anyone ‘messed’ with the dinosaur was when I had a male TA (teaching assistant). His job was to sit behind my desk, collect homework, grade simple assignments, and to hand out bobbins and sewing machine needles. After class one day I found that the dinosaur had undergone a total makeover. Mr. Dinosaur was now very elegantly dressed! Organizing the pins by color, the TA gave the dinosaur a fancy jacket and pants to match. Oh my. Every few days the dinosaur had a new outfit made of pins.

For those who haven’t used sewing pins recently, you’d be surprised at how many different kinds of pins there are. There are now special pins for quilting, for sewing on silk, for sewing on synthetics or natural fibers, and on and on. And they all have different colored ball tops – yellow for quilting pins, white for silk pins. When I was a kid I only remember two kinds – metal flat tops, or multicolored glass ball tops. My mother started using the ball tops when it got too hard for her to pick up the metal top pins.

Thanks to that wonderful TA, I now categorize the pins too. Although I don’t take the time to ‘dress’ the dinosaur by precisely lining up the pins by color, my straight pins are now grouped together by function. Having a ten inch long pin cushion with arms and legs has come in very handy over the years.

I’ve sewed prom dresses for my daughters, vests and cummerbunds for my husband and son, matching pajamas for everyone on Christmas mornings. Now I sew pinafores and stuffed animals for my granddaughters. I’m not sure I could sew anything without Mr. Dinosaur to help.

Last time my son called I was sewing for a craft fair. I mentioned that I was still using his dinosaur. He laughed. Then he said “Just remember, Mom, when you’re finished with my dinosaur, I want him back!” I better put it in my will.