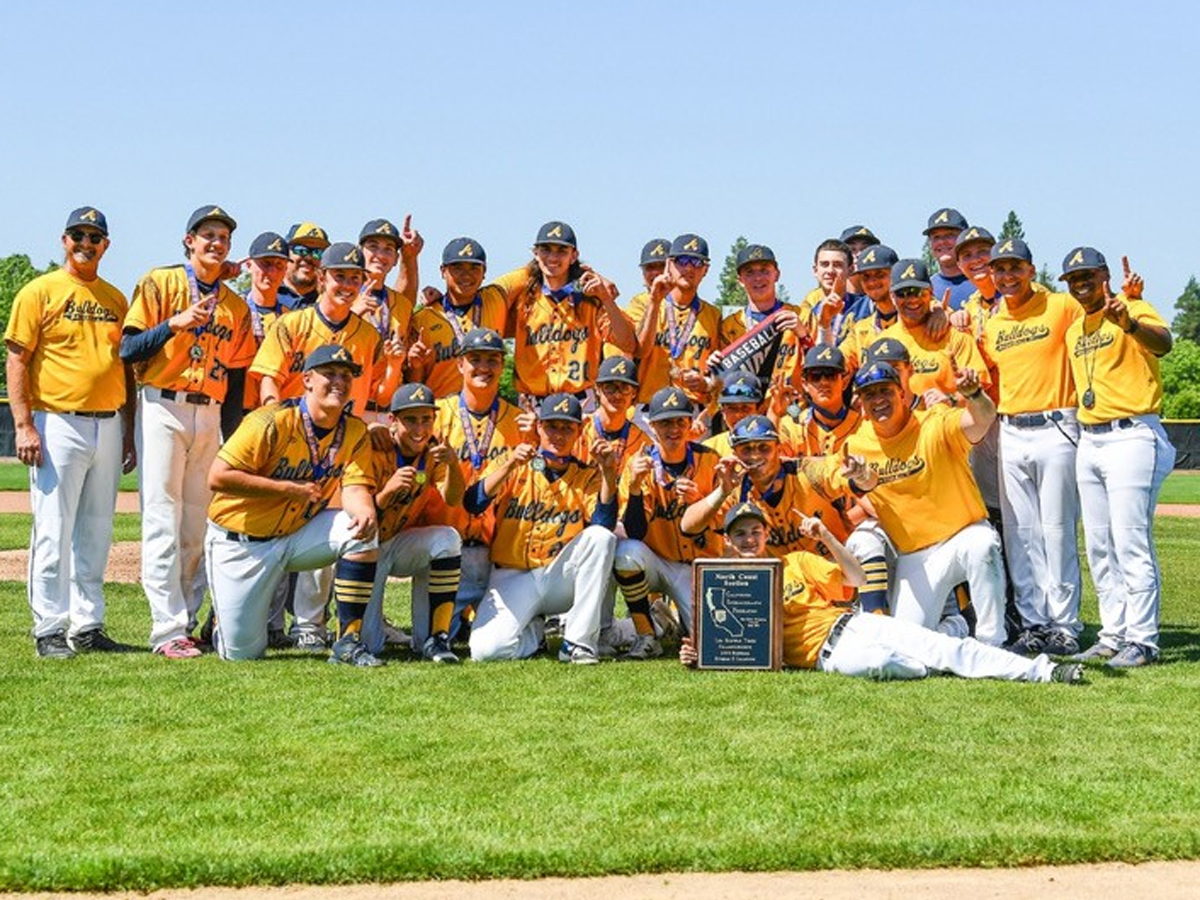 The North Coast Section of the California Interscholastic Federation has conducted high school varsity baseball championships since 1975. Entering the 2019 season, the Bulldogs of Alhambra High School had qualified for the NCS Division 3 Playoffs on 21 occasions, and had twice played for the championship, losing 11-2 to Marin Catholic in 1989, and losing 3-1 to Mount Tamalpais in 2014.

The victory over the Dragons culminated the Bulldogs 20-win 7-loss season, and provided a fitting end for the 12 seniors who never stopped working hard and believing in each other and leading their younger teammates, even when things looked bleak at certain points in the season.

In addition to Eglite, one of the best high school athletes in the Bay Area, four other seniors who have played together and for Coach Elliott since 2009 had major roles in the victory over the Dragons: shortstop Payton deBonneville, centerfielder Tyler Boyce, second baseman Dillon Elliott, and first baseman JT Griffin.

The Bulldogs entered the Section Division 3 playoffs as the number four seed, having lost two of their final three regular season games. Those losses cost the Bulldogs an outright Diablo Athletic League Valley Division title. The team had to share the league title with Las Lomas, the playoffs’ number two seed.

The Bulldogs began the playoffs with a hard-fought 2-1 opening round victory over Kennedy-Fremont.

Next, the Bulldogs won their quarterfinal game against Pinole Valley by a 7-1 score.

Three-year varsity player and team captain Jake Tyler, along with sophomore pitcher Lucas Ringenburg, were the heroes in the win over Campo. Tyler had three of the Bulldogs’ hits, including the game-winning two-strike suicide squeeze bunt hit in the bottom of the eighth inning.

Ringenburg, who was a revelation for the Bulldogs in the second half of the season, started on the mound against Campo and gave up only one run on five hits in seven strong innings.

Ringenburg, who figures to be the Alhambra ace for the next two seasons, would finish the season with a 6-0 record and a 0.77 ERA. He struck out 28 batters against only seven walks in 45 innings.

The championship game against O’Dowd started inauspiciously for the ’Dogs.

Errors on the first two plays of the game put runners on first and second for O’Dowd with no outs. Eglite battled hard, however, and proceeded to retire the middle of the Dragons’ order and escape the jam.

Alhambra threatened in the bottom of the first inning. Leadoff hitter deBonneville worked a walk from Dragons’ ace Wright Thompson.

Thompson, who is headed to Chapman University in the fall on a baseball scholarship, not only entered the title game with an undefeated record, but also was averaging more than one strikeout per inning.

True to form, Thompson struck out JT Griffin and designated hitter Duncan Adams to end the first inning, leaving deBonneville stranded at second base and catcher Calvin Reed (who had also walked) stranded at first.

The Bulldogs would not waste their second scoring opportunity, however. After Eglite retired the Dragons in the top of the second inning, Bulldogs’ left fielder Mateus Conaway was hit by a pitch with two outs in the bottom of the second inning. That brought centerfielder Tyler Boyce to the plate. Boyce, who has been one of Alhambra’s best players for the past three seasons, proceeded to have one of the great at-bats of the year.

After looking at ball one, Boyce fouled off four tough pitches in a row. Boyce took ball two as Conaway, who had just two stolen bases on the season to this point, stole second base. On the next pitch, Boyce lined a single to center field, scoring Conway, and giving the Bulldogs the lead that Boyce and his teammates would never relinquish.

After Eglite retired the Dragons in order on only six pitches in the top of the third inning, the Bulldogs would score again in the bottom of the frame.

Dillon Elliott led off the inning with a double to left center. JT Griffin promptly drove in Elliott with a solid single to right field and the Bulldogs had a 2-0 lead. Thompson, however, induced a double play ball from Reed and struck out Adams.

The Dragons would though. After Eglite retired five batters in a row O’Dowd second baseman Jaylen Anteneh singled and stole second. O’Dowd centerfielder AJ Carter then drew a base on balls.

Next, Anteneh and Carter took third base and second base respectively, on defensive indifference. Then, on a one-ball two-strike pitch, Dragons’ third baseman PJ Carney hit a fly ball to center field. Tyler Boyce, who is as good a defensive outfielder as Alhambra has had in many years, ran the ball down and O’Dowd remained scoreless.

In the top of the sixth inning, the Dragons got a leadoff single, only their fourth hit of the game, from shortstop Matthias Haas. The next O’Dowd hitter, catcher Liam Rizzo, hit a line drive towards third base that Jake Tyler speared.

Tyler alertly threw the ball to first baseman Griffin to double off Haas.

After Eglite induced a weak ground ball to first from Dragon first baseman Kai Johnson, the top of the sixth inning was over and Alhambra was only three outs away from history.

Those three outs would not come easily. Wright Thompson led off the top of the seventh with a five-pitch walk. After Eglite got a pop fly to deBonneville from O’Dowd right fielder Paul Herman, the next two Dragon hitters, William Herbert and Anteneh, singled, loading the bases with only one out.

Eglite again rose to the occasion, getting AJ Carter to hit a ground ball to Griffin, who threw to catcher Reed, forcing Thompson out at home plate.

The next hitter, PJ Carney, quickly got ahead of Eglite in the count at 2-l. Eglite then poured in strike 2 to even the count. Carney proceeded to foul off two tough pitches in a row to remain alive.

However, that reprieve was short-lived as Eglite threw perhaps his best pitch of the game—a curveball low and away—that Carney swung at and missed but which Reed secured, setting off an Alhambra celebration both on the field and in the stands.

Congratulations are of course in order to coach Elliott, and his assistants John Abraham, Jake Benz, Manny Goodall, Jim Keever and Seth Stockton.

All of these men have long been fixtures in the Martinez baseball community. First-year varsity assistant Jeff Lymon, and first-year junior varsity head coach Melvin Perdue also contributed to this season’s successes.

And finally, those successes include the fact that eight of the 12 Bulldogs seniors received individual awards from the Diablo Athletic League.

Brody Eglite, who as a basketball player earned league MVP honors for the 2018-2019 season, was the DAL’s co-pitcher of the year. He finished the year with a 7-3 record and a 1.06 ERA.

He struck out 68 batters in 66 innings. Brody is headed to San Francisco State in the fall on a baseball scholarship, where he will join his brother Jordyn (Alhambra class of 2017) on the Gators’ pitching staff.

Payton deBonniville was named first-team All-DAL shortstop. Payton finished the year with a .359 batting average and made only six errors in 91 chances in the field.

Dillon Elliott was named first-team All-DAL second baseman. Dillon had an incredible season. He finished the year with a .457 batting average, a 1.099 OPS, and led the Bulldogs in hits and runs scored. He also had 17 stolen bases in 20 attempts and made only one error in 87 chances at second base.

Dillon regularly made the Superintendent’s Honor Roll as a student and will be enrolling at Cal Poly San Luis Obispo in the fall.

Josh Ugot was named first-team All-DAL right fielder. Josh led the Bulldogs in doubles and home runs and was third in RBIs and is headed to Cal State Monterey Bay in the fall on a baseball scholarship.

Duncan Adams was the Bulldogs designated hitter and was named second-team All-DAL. Duncan batted .329 for the season. Duncan earned a spot on the Superintendent’s Honor Roll every semester of his academic career at Alhambra and is headed to the Honors Program at San Diego State University in the fall.

JT Griffin was named second-team All-DAL first baseman. JT finished the season with a .338 batting average and a .891 OPS.

Defensively, JT was second-to-none as a first baseman. He made only two errors in 186 total chances, and over the course of the season made several game-saving plays. As a student, JT was also second-to-none. He is graduating from Alhambra with the highest GPA among all male students in the Class of 2019 (not just student-athletes—all students). JT will be at Harvey Mudd College in the fall, majoring in Engineering and playing on the football team.

Alhambra catcher Calvin Reed was also named to the DAL’s second team. Calvin was stellar both offensively and defensively. At the plate, Calvin batted .345 for the season and had one of the most clutch hits of the season when he singled to lead off the bottom of the seventh inning in the semifinal victory over Campolindo. Behind the plate, Calvin made only one error all season, and had only three passed balls. He threw out almost 40 percent of the runners who tried to steal on him. Without Calvin’s leadership behind the plate, the Bulldogs’ season would have ended differently. Calvin will be continuing his baseball career at Los Medanos College in the fall.

Jake Tyler was named second-team All-DAL third baseman. Jake batted .306 for the season and made only four errors in 49 chances at third base. Jake was also called upon to pitch at crucial times for the Bulldogs, and he not only finished with a 3-1 record, but did not give up a single earned run in 25 innings. Jake will also be attending Los Medanos College in the fall, where he will study fire science.

Let it be noted that many Alhambra alumni and other old-timers attend Alhambra sporting events and can often be heard reminiscing about great Bulldog teams and players of the past.

We can rest assured that 30 to 40 years from now the old-timers attending Bulldog sporting events will still be talking about this Alhambra baseball team and these players and coaches, the 2019 North Coast Section Division 3 Champions!