“May you live in interesting times.”
– A traditional Chinese curse 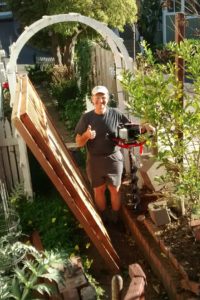 One of my current projects is to build a fence between our neighbor’s house and ours. Our neighbor does not live in his house. Nobody does. The house is uninhabitable. There are holes in the roof. The gas and electricity are disconnected. It has been that way for more than eight years. We see Norman once a year, when he cleans out overgrown vegetation to avoid being cited by code enforcement. In September he came back to remove, among other things, the eight-foot tall ivy plants that had separated our properties. When the wall of ivy came down, we could see the decaying house from our kitchen window and all our neighbors could see into our backyard. The solution was to put up a fence.

Vivian, my mother, and I bought the materials in February at Home Depot when Mom was visiting from Oregon. Mom is 85 but still gets around pretty well with the help of a walker.

We three went to Home Depot to buy all the materials for our fence after church on Super Bowl Sunday. There was plenty of time to shop in the morning then watch the game in the afternoon. By 11 a.m. we had picked out three 4″x4″x8″ fence posts, three bags of fence post concrete, deck screws, caulk, and two 6’x8′ pre-assembled panels.

Vivian pulled our Honda van around to the loading area. Mom and Vivian waited in the van while I flattened three large cartons and arranged them on the roof to protect the paint. One of the assistants at Home Depot helped me gently set the panels and the posts up on top.

After the assistant left I put the concrete and other materials inside the van and took out the ropes. I had brought plenty of tope – two 50′ lengths and one 100′ length. Vivian rolled all the windows down and I began tying the front, the back, the sides, on top and underneath. Vivian is paranoid about things falling off the roof so I was careful to knot every single piece of lumber so it could not shift. The finished product was a source of pride for this former Boy Scout troop leader!

Then I found the first problem. I could not get in. All the doors were tied shut! With some difficulty, I clambered head first through the rear hatch. The van windows are two feet higher than a regular car so it was too difficult to come in through the window. Mother, sitting in the front seat, was very amused when I finally plopped into my seat out of breath and fastened my seatbelt.

“Let’s go home.” I said. Vivian pushed the ignition but nothing happened.

“It can’t be a dead battery” I thought. She had just driven to the loading area a few minutes before.

“Try it again.” I suggested. She did and again nothing happened.

“Are the dash lights illuminated?” “Yes.”

“Do the electric windows work.” “Yes.”

“Are there any unusual indicators or error codes?” “No.”

Fortunately, the weather was perfect. The sun was shining and the birds were singing in the trees there beside Home Depot. We had a case of bottled water for emergencies. After a short debate, we decided that this could qualify as an emergency so broke open the case of water. We had a box of energy bars too. Unfortunately, those were eaten up on the last camping trip and never replaced. The only urgency was to get home by 3 p.m. to watch the Super Bowl or, failing that, before it got dark. Long before that, however, I would need to untie the doors so Mom could use the restroom. She would also need lunch and her medication.

At this point, I was out of ideas so we dug out our owner’s manual and took turns looking up ignition, starter, battery, and fuses. “Maybe it is a fuse,” I thought out loud.

Because there is no handle on the inside of the hatch, I had no choice but to climb out the back window. With the owners manual in hand, I looked under the hood for ten minutes without finding a bad fuse. I untied the driver’s door and unsuccessfully searched for fuses or loose wires under the dash. I tried starting the van myself – it was still dead.

We talked briefly about walking home to get my car. It was over three miles one way. Not a long way to drive but a good hour to walk. We also talked about renting the Home Depot truck at $19 for the first 75 minutes but there was no way to lock the van with ropes running in and out of all the windows. When we returned the truck after 75 minutes, we would still be stranded at Home Depot.

At 2 p.m., we called AAA. The receptionist was very pleasant. She promised us that a tow truck would be there within an hour. As it turned out, the truck was there in half that time. When Mike, the AAA guy, cheerfully provided a jump start, the van sprang to life as if nothing had happened.

I thanked Mike and hastily re-tied the ropes, leaving the rear passenger door untied until I was safely inside. We arrived home without further incident, just in time for the kickoff of a very exciting Super Bowl game. The next day, we bought a new battery.

My mother greatly enjoyed her trip to sunny California and our escapades at Home Depot. She told me before boarding her flight home “There is always something interesting going on when I visit at your house.”