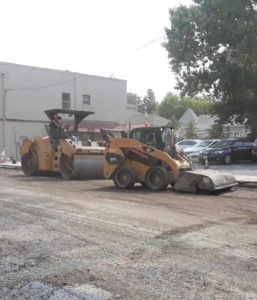 MARTINEZ, Calif. – The extensive paving project on both Brown and Green streets that started in May should be finished by the end of the month, according to an announcement from Don Salts, Martinez deputy public works director.

The $1.7 million project is being underwritten through Measure J and One Bay Area (OBAG) 1) grants.

Both streets needed such significant repair the project was called “rehabilitation.” It’s involved reconstructing both streets, along with the installation of new curb ramps that meet current American Disability Act (ADA) requirements.

The work has been taking place from Berrellesa Street to Pacheco Boulevard.

Although part of the project started as early as May, the Green Street paving took place Aug. 3 and 4, and involved grinding the asphalt layer and repaving the street with 5 inches of new asphalt. The old asphalt surface is being recycled.

Other work has involved improvements to gutters, drainage and sidewalks.

Brown Street is getting the same treatment, Salt’s statement said.

After the paving, both streets will have manhole and valve covers raised to match the new asphalt surface and the streets will be restriped.

General contractor for the project is MCK Services, which has been sending notices to resident and businesses to keep them informed about the work.

The company has been posting “no parking” advisory signs 48 hours before each workday so those traveling in the neighborhood would know when construction would take place, and some motorists have had to adjust their routes through detours or drive through single lanes, especially during concrete and paving work.

Signs, flaggers and traffic control devices have guided motorists through the construction areas. However, the work has been designed not to interrupt mail or garbage service.

At times, motorists and neighbors have been dealing with noise, dust odors, road oil and uneven driving surfaces. During construction, the company has asked those who can avoid the area to do so, and those who must travel there to be patient.