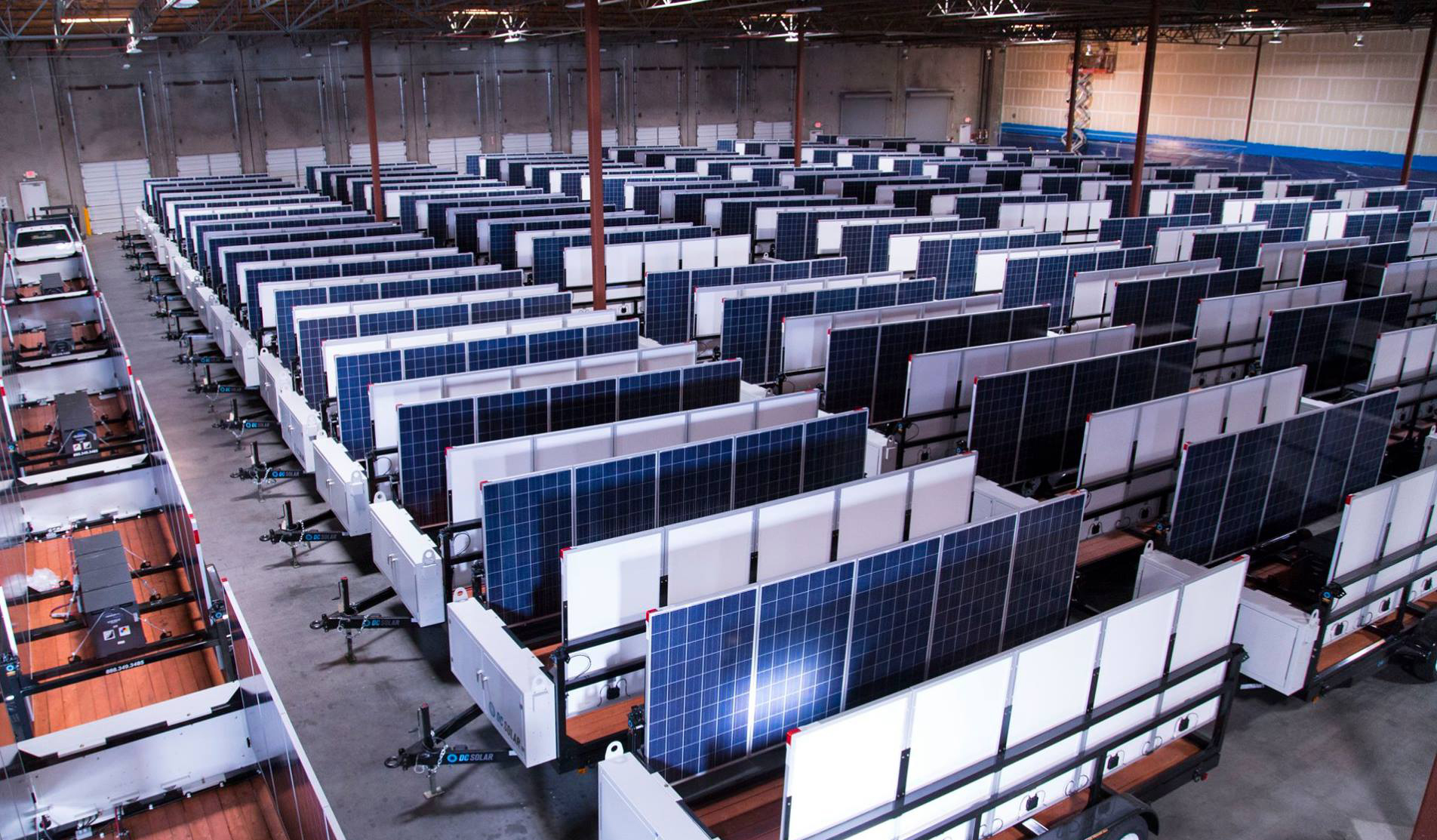 Three federal attorneys have filed a civil forfeiture action in California for more than $65 million in bank accounts, cash and property seized last year in a Federal Bureau of Investigation raid against Jeff and Paulette Carpoff and their companies, including DC Solar and real estate corporations.

Civil action in rem is against property, which is considered the defendant in the case. Because it is a civil action, no criminal charges need be placed against the property’s owner, according to the U.S. Department of Justice.

However, the attorneys are claiming their list of 87 defendant items are traceable to an investment fraud and money laundering scheme run by companies described in other court documents as those associated with DC Solar.

The attorneys wrote that law enforcement reviewed multiple domestic and foreign bank records showing that hundreds of millions of dollars resulted from fraud, and that fraud can be traced to the bank accounts.

The asset defendants listed by the attorneys are bank and investment accounts associated with and connected to Company S, Company D, two individuals listed as “1” and “2” and the California Limited Liability Companies they controlled.

Other court documents have indicated Companies S and D are different arms of DC Solar and the individuals are the Carpoffs.

A third category represents cash seized during the Dec. 18, 2018, execution of federal search warrants. The attorneys said the individuals “1” and “2” were known to store cash in their home as well as the company headquarters in Benicia.

The defendant properties listed are $62,546110.43 in multiple domestic and foreign bank accounts; $1,944,091.07 in cash seized at the Carpoffs’ Martinez home and Benicia offices; an estimated $500,000 worth of jewelry and other personal items; and a $782,949 money transfer for that luxury box at the Raiders NFL football team’s future stadium in Las Vegas, Nev.

Most of the bank accounts had been opened with China Bank and Trust, which is based in Taiwan with multiple international subsidiaries, according to its website. Other accounts were opened with E-trade, J.P. Morgan, BBVA Compass and Bank of America, the attorneys wrote.

Not mentioned in the Monday filing are company vehicles as well as those owned by the Carpoffs, including their personal car collection, which also were seized last year.

The attorneys provided additional information about the Dec. 18, 2018, FBI raid that precipitated events that have led the Carpoffs and their companies to file for bankruptcy in Nevada courts.

The FBI itself has said little about the raid or the case, other than to confirm that agents visited the Carpoffs’ Martinez home and their company headquarters in Benicia.

Judge Kandis A. Westmore, the United States magistrate judge for North District of California, signed one search warrant Dec. 14, 2018, after being convinced that the couple and others associated with the company likely “perpetrated and were continuing to perpetrate an investment tax fraud scheme and conspiracy” in violation of federal codes, and that they had made purchases and transactions with proceeds derived from wire fraud, the attorney wrote.

Then agents turned their attention to 4901 Park Road, Benicia, headquarters of the DC Solar corporations, where they found more cash.

A compliance officer told agents that “Individuals 1 and 2” owned Bayshore and Champion, and that transactions were associated with them as well as Company D and Company S.

Related interviews, including those with employees, “provided valuable information concerning the company’s structure and ongoing investment fraud,” the lawyers wrote.

Also obtained during the raid in Benicia were promotional materials – a pitch deck, marketing information and a meeting agenda, tailored for a large technology company and semiconductor chip manufacturer, the attorneys wrote.

Marketing materials were for a $158,239,037 tax equity deal targeting a tech company, which would have been asked to invest $50,083,110 to start the sale, with Company S financing the balance.

In some of the presentation materials prepared for a 2015 presentation, the company claimed it had deployed more than 2,300 mobile solar generator units and was manufacturing 900 a month.

At no time was there any mention of any association, money flow or sublease agreement between Companies S and D, the attorneys noted in their filing.

Literature instead highlighted the company’s leasing relationship with a telecommunication business.

Also mentioned was an agreement with a Midwest heavy equipment rental company, described as paying $900 a month for each of 300 units it leased, while in reality, the heavy equipment company rarely leased any mobile solar unit, Monday’s filing said.

But an arm of the Benicia company, rather than the Midwest corporation, was supposed to be making payments to the investor, the attorneys said. Agents learned during the raid that only 10 to 15 percent of the 300 generators ever were rented and that solar tax credits worked as a pass-through.

When the Midwest heavy equipment rental company was sued for breach of contract for nonpayment, it countersued, claiming the funding company and the Benicia company had conspired in fraudulent activities to gain $35 million in tax credit sales from the federal government, according to the U.S. attorneys.

During the Dec. 18, 2018 raid, agents also recorded several interviews, including one with an executive of the Benicia-based company, the attorneys wrote.

That employee described the business model to agents and said historic lease revenues weren’t sufficient to cover expenses. Nor could Company D make enough in leases to pay the tax equity funds owed under lease agreements, the employee said.

That employee said one arm of the company would pay another arm between $3 million and $4 million monthly to subsidize revenue shortfalls.

Also interviewed during the raid was a representative of an insurance company that had invested $300 million into the Benicia company’s tax equity deals, the attorneys said

The representative said sublease payments from large companies were supposed to be used to replay promissory notes, adding that his or her company wouldn’t have wanted to invest if there were no lease revenues.

Law enforcement agents executed more than 50 federal seizure warrants during their Dec. 18, 2018, visit. These were on the Benicia company’s and on other related bank accounts connected with the accused fraud scheme, the attorneys wrote.

The day after the search, one of the Carpoffs transferred about $5 million from a tax investment fund account to an unrelated bank account in South Carolina, according to Monday’s filing.

“This account related to a newly-formed tax investment fund,” they explained, which is why investigators didn’t know about it at the time.

A new tax equity investor had put about $13 million into the count Dec. 17, 2018, but agents missed the $5 million wire, they wrote. “Law enforcement has since traced those funds,” they added.

The many China Bank and Trust accounts were created by the company owners and employees as distinct investment entities, the court document said. Records indicate the bank accounts received large transfers of fraud proceeds “for many years,” the attorneys contended.

In addition, the attorneys wrote that “millions of dollars” had been flowing from the Benicia company’s bank accounts, some for personal use.

They said $19 million was transferred to NetJets, a company specializing in selling airplane shares; another $782,949 was transferred from Company S for a luxury box at the Las Vegas Raiders stadium.

Money from an account of one of the Carpoffs’ real estate companies, Blue Dog Properties, was used for a personal certificate of deposit, and the money was reimbursed by an account from one of the DC Solar companies.

The attorneys are contending that the money and other assets listed in their claim are connected to “specified unlawful activity,” including wire fraud and a defrauding scheme that used false claims or concealing of material facts. As such, the money and items “are subject to forfeiture,” they wrote.

The attorneys said that those having an interest in the assets should be given notice to file a claim with the court.

“The Company represented to investors that investing in the solar equipment – i.e., purchasing it through the tax equity investment fund – had very favorable tax consequences, including valuable credits and depreciation,” the attorneys wrote.

They described how the arrangements were to work:

For a transaction structured around $100 million in purported value, Company S would solicit an investor to contribute about $30 million in cash into an investment account for mobile solar generators and execute a promissory note to Company S for the remaining $70 million.

But a former employee said that’s not what happened, the attorneys wrote.

Instead, the leases and subleases relied upon by investors to claim the promised favorable tax treatment and other investor benefits did not exist as described by the company, they wrote.

Instead of subleasing the equipment as represented to investors, Company D subleased the units to Company S, which did not in turn lease the generators to end-users, they wrote.

Rather, Company S raised money from new tax equity investors and transferred it to Company D so Company D could avoid breaching its lease with the existing tax equity funds, they wrote.

These practices made the company appear successful and the leases appear legitimate, even though the equipment leases actually generated little income, they wrote.

Early investors were paid from funds contributed by later investments, the attorneys contend. In other court documents, FBI Special Agent Christopher Phillips has characterized the practice as a Ponzi-type scheme that reached $800 million.

“The Company did not disclose this Ponzi-arrangement to tax equity investors,” Scott, Espinosa and Khasigian wrote in Monday’s filing.

“Nor did the Company disclose to investors the consequences of their misrepresentations and material omissions including disqualifying the investors from the favorable tax treatment promised to them in exchange for their investment,” they wrote.

Before the FBI raid, the Carpoffs had been active in multiple community activities.

Their company was a primary sponsor of the annual Holiday Ice rink, and they paid their portion for the 2018 Holiday Ice that eventually was canceled because of a shortage of parking through the construction of the new Contra Costa County administration building project.

In 2017, the couple made a $100,000 donation to Martinez Police to expand its license plate readers program. They have been among those showing interest in renovating the former Southern Pacific Depot, at one time offering to invest $3 million in the building’s rehabilitation in exchange for being able to use the building for a restaurant.

Paulette Carpoff became the owner of the Martinez Clippers baseball club, part of the Pacific Association of Professional Baseball Clubs, which had its inaugural season in 2018. Although the city invoiced Carpoff for use of Field 3, the $30,000 bill remains unpaid.

She announced earlier this year, in the wake of the bankruptcy declaration, she would not field a team this year, and the city ended its multi-year contract with the club.

Efforts to find a new owner for the team on short notice in time for the 2019 season fell through earlier this month. League Commissioner Theo Fightmaster said earlier this year a traveling team might be formed in order to keep a six-team schedule, or the Association may slate additional dark days this year. Whether a team owner can be secured before the 2020 season has not been determined.