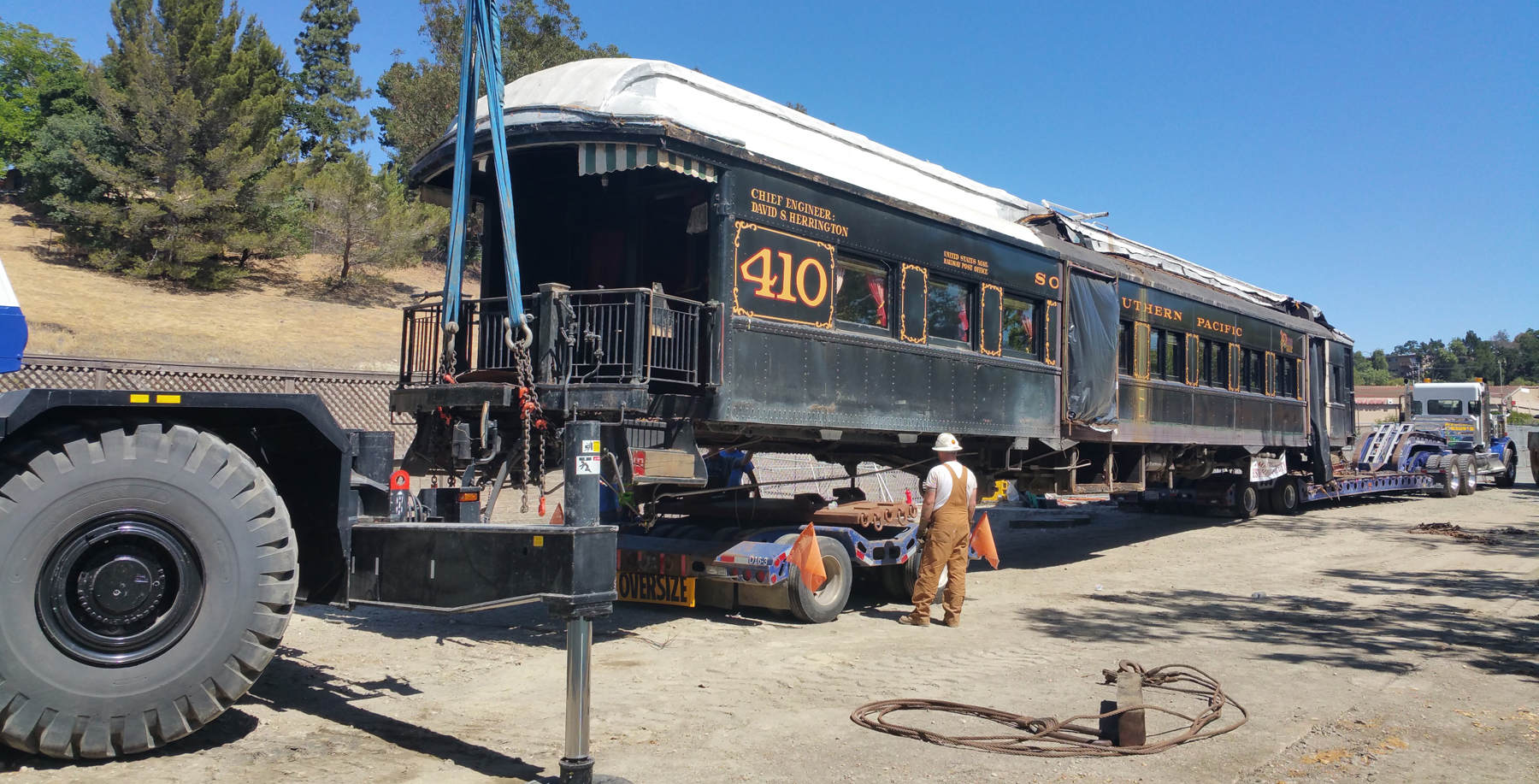 MARTINEZ, Calif. – A vintage rail car that once was part of the award-winning Walnut Creek steakhouse, Vic Stewart’s, is out of Walnut Creek to Martinez, said Martinez Historical Society President John Curtis.

“The move went like clockwork, so smoothly that it was moved in one long day rather than over two days, which was the plan,” Curtis said.

The biggest challenge to getting the 90-ton car moved had nothing to do with the car or rails. Instead, it was a Pacific Gas and Electric transformer and box, which historical society officials had heard could be moved as early as March.

In fact, the organization had been speaking with Phil Joy Housemovers of Benicia about the move. For Joy to handle it, the PG&E equipment needed to go. However, the utility said other customers needed power from that equipment, even though much of the main customer, the steakhouse, has been demolished.

“Not only did that delay the move for months, it ultimately required leasing a crane to deal with the obstruction, which increased the moving costs by 50 percent,” Curtis said.

And it meant switching from Joy’s firm to Taylor Heavy Haul, which Curtis said has its own link to the rail 82-foot car.

In 1973, when the rail car was being brought to California, it was next to the Taylor yard when a munitions train exploded, damaging the car. Shrapnel pierced its sides in multiple places, and windows were blown out.

The damage could have been worse. Train cars and parts flew 800 feet into the air and a set of train trucks fell into the Taylor yard.

That the movers have that connection to the rail car “is very synchronistic,” Curtis said.

Owner John Herrington had to repair the shrapnel damage before incorporating the car into his restaurant and turning it into a dining showcase. It was a popular destination in Walnut Creek until Herrington decided to retire, close the steakhouse and donate the car to the historical society.

“Loading up the car will be a tricky business, because it is wedged in between the remains of the restaurant, including the 1901 Walnut Creek Train Depot, the concrete block wall along Iron Horse Trail and the PG&E transformer in front of the car,” Curtis assessed before the weekend move.

The company needed daylight for good visibility to move the long load, so work wasn’t supposed to take place after sundown, he said. And because the PG&E equipment prevented pulling the car straight out from its Walnut Creek location, the crane had to be used to lift it up over the transformer.

“Taylor is an experienced train car mover,” Curtis said. “In fact, they said they moved a smaller car just two or three weeks ago. They enjoy moving train cars. It is more interesting than moving around construction equipment, tanks and long lengths of pipe.”

Once hoisted, the car was placed on the rear deck of a truck, onto a bolster that swivels like a lazy susan when the truck goes around turns, Curtis said.

The rear end of the train car was on an independent dolly, he said. “I understand it was a steerable dolly to enable the vehicle to make sharp turns, because it was towing an exceptionally long load. Moving it in that manner, instead of placing it on a flat bed, meant that we didn’t have to take off all the components under the car.” Those included water tanks, battery boxes and the brakes; air tank.

Leaving Walnut Creek, the car was taken on North Main Street, Contra Costa Boulevard and Pacheco Boulevard. Interstate-680 on and off ramps were used to avoid the California Highway 4 underpass that is 14 feet 9 inches instead of the standard 16-foot clearance, Curtis said.

Once the train car was on Martinez city streets, it was taken to a secure location, where it will be stored until the historical society finds a permanent home for the rail car. The car is not available for public viewing at this time.

Eco Services graciously offered a secure location to the Martinez Historical Society for storage of the train car until its permanent location has been readied.

There is plenty more work to be done, Curtis said. Despite its apparent beauty, the car is in rough shape in some places.

“Dianna Vanni Mattias just wrote a grant and submitted it to Union Pacific to fund repairs to the car, like the two openings in the side where the car had been attached to the now closed – and not to be reopened – Vic Stewart Restaurant.”

The Society has a GoFundMe (gofundme.com/MoveTheTrainCar) account, started when the organization first heard from Herrington that he wanted the Martinez organization to have the car once the restaurant was closed.

And more funds need to be raised before the moving bill arrives, in about a month, Curtis said. “To date, over $8,000 has been raised. Much of that consists of checks mailed into the Martinez Historical Society by those who wanted the organization to have the full benefit of the donation without the deduction of the 7.9 percent by GoFundMe,” he said.

The car is in a secure gated place where unauthorized people cannot reach it, but where historical society volunteers can work on the car until it finds a final home for public display, Curtis said.

The Society still hopes that will be the former Southern Pacific Railway depot, rather than Waterfront Park, he said, even though there are concerns about pipelines on one side and Union Pacific right of way on another.

“But the city is still analyzing the situation there,” he said. “They have issued a preliminary report, but not the final report.”