However, I want to specifically address a couple of items. Let’s start with a conversation that occurred about two and a half years ago to inform parishioners of St. Catherine’s of the last twenty years how the truth about these campaigns has been handled.

As for the Valley Foundation, I was glad that was brought up. The fact is that we did have a grant of $750,000 to build the gym taken away in December 2013. The Parochial Administer, Deacon Albert Dizon, never sent in the required quarterly report to the Foundation. When the paperwork was not sent, the Foundation pulled the grant. This can be verified by the Valley Foundation and the Diocese. Deacon Dizon is still part of the leadership team today, even though he let $750,000 slip away because he couldn’t send a letter.

From 2015 to 2018 Bishop Barber would not allow me to reapply for a grant because he was in dispute with the Valley Foundation Board. This once again can be backed up the Diocese. After 2018, Father Anthony never gave his support for the gym and, until he declared his support, we could not apply for another grant. The Valley Foundation seems to like to have the Parochial Administer (Father Anthony now) state they will use the money for what it is intended. As I have stated before, the leadership of St. Catherine’s church and the Diocese have blocked this project many times. I have nothing but the truth and my direct knowledge of the history of this project to support me.

As of May 2018, the parishioners had voted “yes” for this project twice in the last two years.

In August 2017, in a joint meeting with the Parish Council, Finance Council, and the Building Committee, a vote was held to go forward with the latest version of the gym. We even announced the decision to the parish at each Mass.

Unfortunately, these votes were never honored because less than sixty days into Father Anthony’s start at St. Catherine’s, he declared he was not going forward even though the Diocese, the City of Martinez, and St. Catherine’s church were all on the same page.

In May 2018, there was another vote to do an engineer study to see if the figures, that showed the project on budget, go forward as presented in August of 2017. That vote was also a “yes”. Unfortunately, this vote was never followed through with because Father Anthony was not in full support of the project. The Diocese can affirm all of this.

Let me stop here. Because no one will sit down and talk with me and/or investigate all the supporting evidence I have on this project. So, let me use Father Anthony’s numbers to demonstrate the quagmire we are now in and the wall I have been banging my head against. 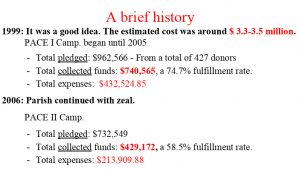 Since some believe that Father Anthony is transparent and truthful, this sentence is a key statement on the integrity of the Oakland Diocese and all the Bishops from 1999 to the present time. Two of the former Bishops are now Archbishops: Archbishop Allen Vigneron of Detroit and Archbishop Salvatore J. Cordileone of San Francisco. Under these Bishops there have been three campaigns. The first campaign was Pace 1 to raise $1 million; the second was Pace 2 to raise another $1 million; and the third, Fulfilling the Promise to raise $850K. All three were officially approved by the Bishops during their tenures and were implemented with funds collected to build a gym. Father Anthony’s slides reflected this narrative.

This presents a huge problem. Cannon Law 1300 states that if a gift cannot be used for the specific purpose envisioned by the donor, the gift must be refused. Since the Diocese, according to Father Anthony’s presentation, knew it would cost over $3 million to build a gym in 1999, none of the campaigns should have been authorized nor should the funds have been accepted because there would never have enough money to actually build the gym. (Please note this estimate is from the Diocese and none of the past campaign chairs were ever informed of this cost estimates from the Diocese.)

Since all campaigns are ultimately the responsibility of the Bishop of the Diocese, that means we have four separate Bishops that have violated Canon Law based upon the figures presented by Father Anthony with the Oakland Diocese CFO stating he thought the numbers were true. (Let’s not even try to figure out how Father Anthony states Pace 1 and Pace 2 only raised $1.1 million total on the same slide #25. Yet we sit on approximately $1.8 million in cash for those two funds.) Either we have twenty years of questionable activities by two Bishops and two Archbishops or maybe the transparency and numbers presented to St. Catherine’s parishioners in order to “end” the project is deliberately misleading. (Does anyone find it coincidental that Father Anthony outlined that there are $2.1 million in projects listed that have yet to be done at St. Catherine’s, and that is about what St. Catherine’s has in all the campaigns and remaining savings?)

The bigger question I have is not if the gym is being built. That decision has been made and will unfortunately probably never be reversed.

MY ONLY REQUEST IS FOR THE BISHOP AND ST. CATHERINE’S CHURCH LEADERS TO HIRE AN INDEPENDENT THIRD-PARTY FIDUCIARY TO HANDLE THE UNWINDING OF FUNDS TO MAKE SURE EVERY DONOR FROM 1999 THROUGH 2019 IS HEARD, RECORDED, AND ACTED UPON PROPERLY.

Why would any person be against what is the most ethical and morally financial thing to do with so much money?

Please Mr. Greerty, Mr. Melendez, and Ms. Martin join me in this request. It is the right thing to do and is good for our souls.

Letter to the Editor: The insidious nature of good enough

Letter to the Editor: The time to fight for the Gazette is now