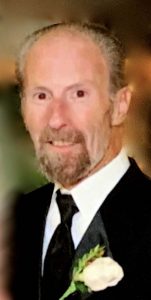 Joseph Edward Costanza (Joe), 74, passed away on April 10, 2019, with his family by his side. He was the son of Joseph Costanza and Vivian Costanza. Born and raised in Martinez, Joseph attended elementary school at St. Catherine’s in Martinez and graduated from Alhambra High School in 1962.

Between 1963 and 1967 Joseph served with the US Air Force as Airman 1st Class. After his service, Joe returned home and worked for Macy’s in Concord as a Receiving and Shipping Clerk from 1967 until retirement in 2010. He resided in Antioch 1970-2014 before moving to Sun City retirement community in Roseville in 2014.

Joe was an active member of Teamsters Union Local 315 in Martinez, CA. He enjoyed hunting, fishing and abalone diving with his father near Point Arena. Joe was a handyman around the house, loved the outdoors and enjoyed family camping trips. There was nothing he loved more than spending time with his grandchildren and cheering from the sidelines at their sporting events. Joe enjoyed preparing Italian cuisine, especially pasta dishes with extra garlic.

Joe was a loving, courageous and devoted father, husband, son and grandfather. He leaves behind his wife of 49 years, Saundra Costanza of Roseville, CA, Mother, Vivian Costanza of Folsom, CA, three children, Marc (Alison) Costanza of Bellingham, WA; Lisa ( DJ ) Miranda of El Dorado Hills, CA, Tony (Shaina) Costanza of Clinton, CT; four grandchildren, Kaia, Caelen, Andrew and Alex and a host of friends and relatives. He was preceded in death by his beloved father, Joseph Francis Costanza. Joe leaves behind a legacy of love, humor, encouragement and life lessons.

Funeral Liturgy will be at St Clare Catholic Church in Roseville at 10 a.m. on May 2. Interment will follow at Calvary Catholic Cemetery with Military Honors; 7101 Verner Avenue, Citrus Heights, CA. Memorial gifts may be sent in Joseph’s name to Disabled American Veterans.