The petition is on the website Change.org, and MEA representatives said they may surpass their goal of 1,000 signatures. 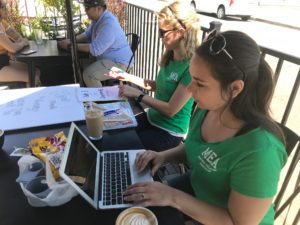 The petition is directed to members of the Board of Education, asking, “Please settle the contract with your teachers. Teachers are one of the most important things in this school district, and I want my child’s teacher to be able to focus on the classroom 100 percent rather than be distracted by prolonged contract negotiations. You have the ability to prioritize your budget to show you value teachers. Settle the contract now.”

Its introduction says teachers have been involved in contract negotiations with the school district for more than a year without reaching an agreement on a contract. “Teachers need a settlement and are preparing to strike if necessary,” it said.

In a written elaboration on the petition, MEA President Brenda Navarro and Dr. Marilyn Brouette, its vice president, said parents and community members have been “very supportive of the teachers.”

So the association decided to create the community petition as a method for them to show that support without interrupting their schedules, they wrote.

“We have a goal of 1,000 signatures. When we feel the time is appropriate, we will print the petition and present it to the school board members,” they wrote.

“Martinez teachers support the success of every student, and we hope to attract and retain quality teachers to effectively support our students,” they wrote. “However, that is very difficult to do. Compensation in Martinez combined with the statewide teacher shortage has really impacted our ability to attract and retain great teachers.”

Some have contended California just doesn’t provide enough money for education. For instance, a 2015 California School Boards Association Education Legal Alliance report, “California’s Challenge: Adequately Funding Education in the 21st Century,” said that California would need to double its investment in education just to achieve the average funding level of the top 10 states.

It said kindergarten through 12th grades are underfunded by $22 billion to $42 billion and that the state is $3,427 per pupil behind the national average when regional cost differences are considered.

Navarro and Brouette wrote that the Martinez Unified School District has not experienced a reduction in district funding, and that it has the power to decide how that money is spent.

The Local Control Funding Formula (LCFF) was passed by the state in 2013 to change how school districts receive state funding, and gives a district autonomy to decide on which programs and services it would spend state money.

The formula’s revenue is the primary source of a local district’s general purpose funding, and the Local Control and Accountability Plan (LCAP) is how school districts set goals, plan actions and leverage resources to meet those goals, according to the California Department of Education.

Nor is MEA swayed by suggestions the District must cut up to $3 million from its budget in three years.

“If you look at the last five years of Martinez School District budgets, there is always a deficit in the third year projection,” Navarro and Brouette wrote. “This is common in school districts because they budget very conservatively, which is a good thing.

“However, the conservative budgeting means that we never actually realize that third year deficit. In addition, the Board has the ability to make changes to the budget before the third year becomes a reality,” they wrote.

And that is what the teachers’ organization said it is asking the District to do, “create a budget that reflects their priorities and the priorities of the Martinez community.”

Navarro and Brouette said other districts are finding ways to cover costs while giving teachers priority, and they said MEA expects MUSD to make the recruiting and retention of quality teachers a priority.

In addition, the report said 85 percent of MUSD’s unrestricted expenditures goes to salary and benefits, and it can’t make salary schedule improvements without looking at cuts in other areas. Metcalf’s report said the California Department of Education imposes spending mandates on special education and in other areas, but doesn’t provide enough extra funding to underperforming students.

But Navarro and Brouette said there are flaws in that report.

“If we want to attract and retain teachers in Martinez, we need to compare ourselves to nearby districts,” they wrote. “There is a huge difference between the cost of living as a teacher in Contra Costa County versus the Central Valley where the district comparisons in the School Services presentation were made.”

When Martinez teachers’ career earnings are compared to those in other Contra Costa County district, the local teachers come in fourth from the bottom, they wrote, adding, “Although special education is a cost issue in every district, other districts are finding ways to cover costs while still making teachers a priority.”

They said the cost of living in Contra Costa County is “prohibitively expensive,” and wrote that not only have many teachers taken on second jobs, some have lost their homes.

“For a family of four, $117,000 is considered the poverty line,” they wrote. “Our teacher salaries, even for long time employees with doctorates, are nowhere near that figure.”

The District has placed a measure on the November election ballot that not only would extend the $50 parcel tax, but expand it by an additional $25, for a total of $75. Parcel taxes could be used for teachers’ salary, “as long as the District includes that in the ballot language,” which Navarro and Brouette said was not done.

District Superintendent C.J. Cammack said he is aware of the petition and that it is being shared on social media.

“Our respective sides are not in disagreement that our teachers, and all our employees deserve a raise,” he wrote in answer to a request for a response. However, he said the petition could be perceived as suggesting otherwise.

“The key issue is how much can we responsibly afford to provide. Working from the belief and understanding that the District does want to provide a raise, I can certainly understand why there is a lot of support for our wonderful teachers from our community and our parents.”

Once the petition is shared with the Board, it will be treated as “information to be considered” under the regulations and laws that govern collective bargaining, Cammack wrote.

Cammack said the Board and he are optimistic that “with courage and collaboration,” MUSD and MEA can reach an agreement through negotiations and avoid a teachers’ strike.

“The District believes there was further movement which could have happened in the traditional process of negotiations,” he wrote. “As you may know, some districts in our county have just now started negotiating for (Fiscal Year) 2018-2019. MEA and MUSD were already settled for all items, including salary and benefits for the 2017-2018 school year. These negotiations, which remain unsettled, are for the current 2018-2019 school year.”

He wrote that “there is an absolute desire” on the part of the District to provide all its employees, including the teachers, a salary increase. “The district continues to scrutinize expenditures and revenues, including reviews of our actual expenditures now that all the books are closed from a fiscal standpoint, on the 2017-2018 school year.”

At the same time, the District also must meet its fiscal obligations, including pending budget reductions, he wrote, adding that employee salaries, benefits, pensions and statutory employment costs make up 90 percent of MUSD’s overall budget.

“This includes paying for the ‘step and column’ increases in salary and also paying the increase in health care premiums for employees. The employees of MUSD are always the largest portion and biggest focus of the District,” he wrote.

He disagreed with describing the $117,000 salary as “poverty level,” saying that figure from a Housing and Urban Development report applies specifically to San Francisco, not to Contra Costa County or Martinez.

However, he added that the District concurs that employees deserve compensation to keep up with inflation and the cost of living in the Bay Area.

Cammack said the MEA’s position that the District’s funding hasn’t decreased “is, in part, accurate.” But revenue is only part of the District’s budget story.

He said the District also has confidence in the California School Services analysis presented by Metcalf. He and the District and agree with the report’s contention that District revenues aren’t sufficient to meet increased costs or to keep offering raises at the rates seen during the past six years, which he said reached a total of 17 percent.

Cammack wrote that ongoing increases in expenses must be coupled with reductions in ongoing expenditures. Then he described LCFF appropriations.

“Local Control Funding Formula, current state funding law, allots per-pupil funding differently based on the density of students who are English learners, enrolled in free or reduced lunch programs, or are in the foster system.” Those students are called “unduplicated” students

Unduplicated students earn their districts a higher Average Daily Attendance (ADA) payment from the state than do other pupils. When a district is more than 55 percent unduplicated students, the ADA payment increases. Some districts use that extra money for employee salaries.

But MUSD’s unduplicated students account for less than 30 percent of those enrolled, Cammack said, and the local district can’t compete with Pittsburg and others that receive an additional $1,500 or more per pupil than MUSD receives.

Since Cammack succeeded Rami Muth after her retirement in June 2016, the District has cut more than $1 million in expenditures.

“We continue to consider how we can reduce expenditures with a focus toward providing the best compensation for our employees and maintaining our programs and services for students,” he wrote.

“Any increase in revenue, when adjusted for inflation, are simply not sufficient. This is evident by our state’s per-pupil funding continually falling close to the bottom of national rankings.”

He said the current parcel tax pays the salaries of some of the District’s employees, especially those in the music program. It also supports some instrument repair and art supplies for secondary programs. Like other expenses, those costs continue to rise, and the parcel tax revenue doesn’t go as far as it did in 2008, he wrote.

Nor is the ballot’s parcel tax Measure Q written with the sole focus to provide raises to employees, he wrote. “However, increased revenue through Measure Q could certainly help free up some General Fund money which would not be restricted by the language of a parcel tax,” he wrote.

“It is very important that the money generated by Measure Q, if it passes, is spent in accordance with the written commitment we make to our voters,” he wrote, but the additional revenue brought by Measure Q could free up money elsewhere.

Unlike the city of Martinez, MUSD is not allowed to seek a general tax increase such as a sales tax, he wrote. Instead, MUSD taxes must be a specific parcel tax that requires a two-thirds majority approval vote for passage.

District expenses are increasing, especially in state-mandated categories such as pension contributions to employees, he explained. Those mandates can absorb much of any increased revenues. “To be clear, no one at MUSD opposes contributing to CalPERS or CalSTRS,” he said, referring to the California Public Employees Retirement System and California State Teachers Retirement System.

Recent state-required contribution increases are the result of “a complicated political history” and District employees aren’t culpable for that, he wrote. “Pension benefits are a form of deferred compensation, and MEA members deserve secure retirements.”

By combing through the budget for possible reductions and by working with its unions, the District and Cammack are optimistic an agreement can be reached that avoids a strike.

That action would have “very negative impacts for our students, our community and our entire district. The decision to strike is solely the decision of MEA,” Cammack wrote. “I remain hopeful that an agreement can be reached prior to any such action.”