“Sheltering in place” and “Social Distancing” has ironically linked neighbors who did not know each other and turned a new owner’s corner market into a community. Customers are finding what they need and getting to know each other, – from a distance.

Two months before the coronavirus came to California, Sal Salman took over as a new owner of Molly’s Market at the corner of Shell Avenue and Martinez Avenue. His dream was to build a business like the one he grew up in, his father Al’s small corner grocery store. “My grandfather had a store, too,” Sal said. “We knew our customers and they knew us.”

He said we were like a family. “If someone could not come in, we would take their groceries to them. If they needed something, we ordered it.”

The recollection brings a smile to his face as he begins to explain how the Cal State East Bay graduate in International Business abandoned the corporate world to recreate the family store of his childhood.

“It was more than a store. It was a community,” he said. When Sal bought the run-down property he cleaned, painted and uncovered the windows. His wife and mother helped him get the deli going, and one of the first things he did was to survey the neighbors.

Sal said he wanted to focus on products other than just liquor, candy, cigarettes and chips. “I asked what they would like to find at the corner store. We had 300 comments,” Sal said. “We started fresh two major suppliers, bringing in the items our customers wanted.”

Then came the coronavirus. They had to go to the next level to provide for their customers. “Now we have at least six suppliers. We have merchandise that other stores don’t have because of the relationships my father established in his business,” Sal said. “Some of them (wholesalers) won’t deliver. We go and pick up the products we need and pay cash for them.”

Sometimes they do not make a profit on certain products, according to Sal, but even now store shelves are filled with the essentials for baking including cake mixes, baby food, milk, butter, eggs, charcoal, motor oil, paper towels, toilet paper, fresh bread, an array of ice cream novelties, frozen meals, and cleaning products.

Michelle Chatman has lived in the neighborhood for 40 years. She came in on Monday to buy a freshly made turkey and avocado sandwich with plenty of extras, including olives, for $5.99. “I love the new owners,” Chatman said. “They are wonderfully friendly. We come every day.” 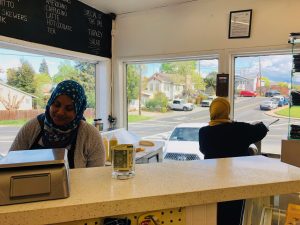 Their sandwich maker was Sal’s wife Doaa, who was working on a hot Philadelphia Cheesesteak sandwich when she declared, “It is like a big family.”

Sal’s mother, Hala, was helping in the deli that day, and she seemed surprised and delighted by that idea. Overcoming her reticence to comment, she said, “When Al came back with a load of boxes for the store, the customers helped him unload it!”

Just then Al Salman came in the door with fresh rolls, followed by a helper carrying a box of seafood. “Someone asked for seafood. We now have fish.”

In the parking lot, Sean was six feet away. He said, “We saw these coming, so we really don’t need anything, but my kid’s eighth birthday is today and we promised him cake and ice cream for his birthday. So, I’m here to get some ice cream.”