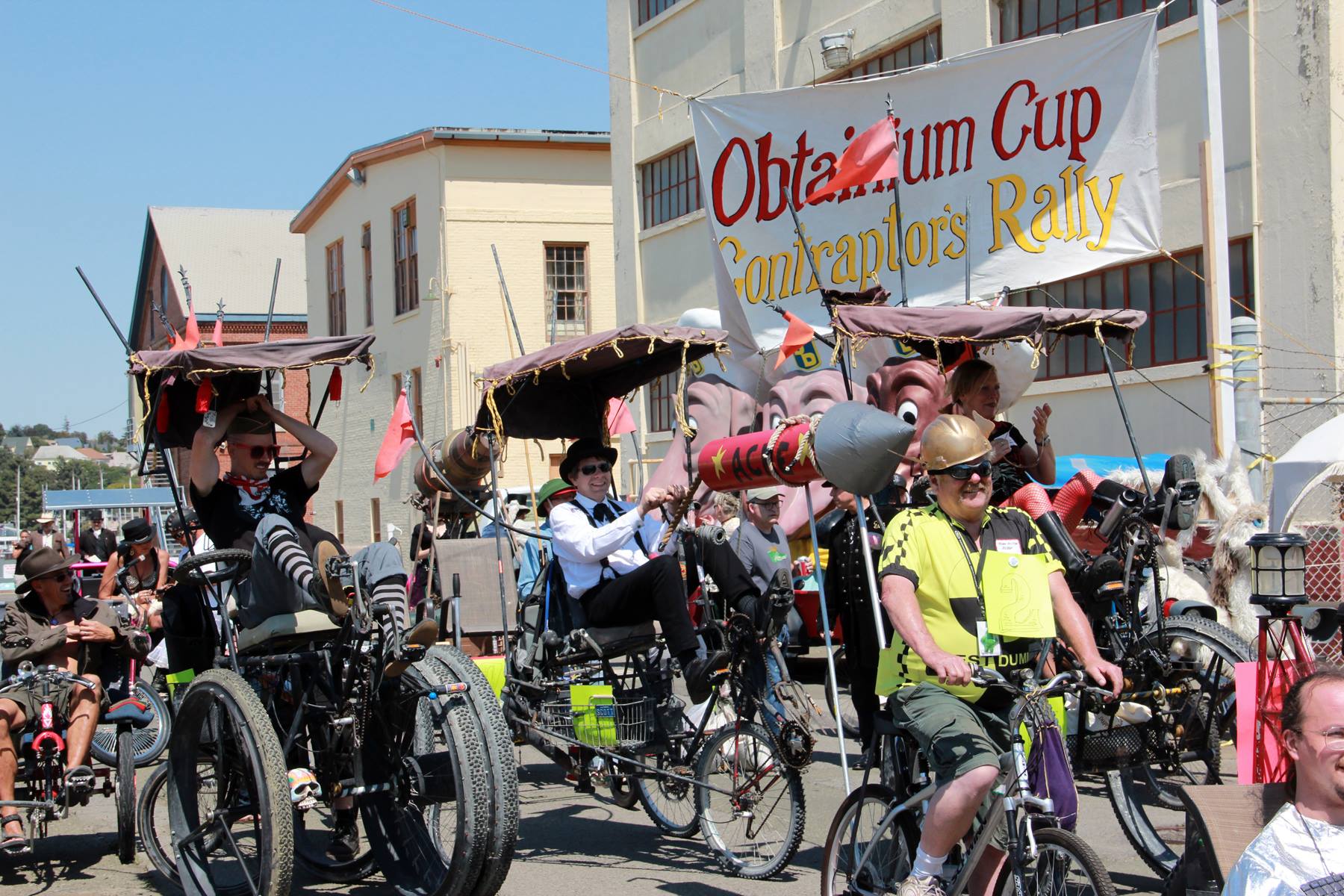 A road race will pit the drivers of some oddball vehicles against flying monkeys, robots and zombies Sunday on Vallejo’s Mare Island.

The contest is called “The Obtainium Cup Contraptor’s Road Rally,” and this is the seventh year for the organized mayhem.

It’s somewhat inspired by the three-day Kinetic Grand Championship in Humboldt County, a contest for people-powered vehicles that travel along 42 miles course with sand, mud and water challenges on the road from Arcata to Ferndale.

To dare that challenge takes physical strength as well as smart engineering, Shannon O’Hare, whose titles include “Major Catastrophe” of Obtainium Works, an arts collective on Mare Island.

Members of Obtainium Works have competed in the Kinetic Grand Championship. But when O’Hare started thinking of a local contest, he wanted to emphasize recycling and repurposing, particularly of found and found things – “obtainium” – in the creation of competing vehicles.

The art collective also is known for having created the Neverwas Haul, a three-story Victorian house mostly made of recycled materials. But this house is self-propelled.

Obtainium Works also is a big part of the “Mad Hatter” events in Vallejo, from the “Alice in Wonderland” July 4th Mad Hatter Waterfront Celebration to the city’s Mad Hatter Holiday Festival that culminates in the Christmas parade. The Mad Hatter also influences one of the Obtainium Cup challenges – competitors must survive the Mad Hatter Tea Party.

The Obtainium Works’ themes also take a lot from the “Burning Man” event, where Neverwas Haul has made a few appearances, the creative “Maker” movement community, as well as from Steampunk, a literary genre of adventurous speculative fiction that expands on the visions of such Victorian writers as H.G. Wells and Jules Verne.

Participating vehicles can range from traveling trees to land sharks to elegant people-powered carriages that once were human-powered and motorized vehicles, disability scooters and bicycles that will come from throughout the Bay Area.

Some of the entries are made by children under O’Hare’s guidance and knowledge shared from his past experience in making theatrical props and sets. This year, they’ve made a new child’s entry, a fancy dragon.

As the “contraptions” travel around the road course, their pilots and passengers will be assailed by flying monkeys – in this case, little stuffed animals shot out at oncoming vehicles.

Once through the shower of monkeys, vehicle operators must avoid or trick a horde of zombies who want to eat their brains.

They also must outwit some tricky robots and characters from Lewis Carroll’s “Alice in Wonderland” before they return to the start-finish line in Arden Park.

Once again, the rally will be the grand finale of a weekend of fun. From what was considered a glorified photo shoot seven years ago, the Obtainium Cup now attracts 30 or so entries and hundreds of spectators, said Kathleen O’Hare, who also goes by the name Lady Impetuous, who is the logistics expert for Obtainium Works.

A new event at Obtainium Works, 510 Pennsylvania St., is a bicycle rodeo that will show children how to ride bicycles safely. The rodeo, which starts at 9 a.m. Saturday, is organized by Solano Safe Routes, and bicycles will be provided.

Also taking place Saturday is the fourth annual Art Car Jam will attract street-legal vehicles that may be painted in artistic ways, decorated in “obtainium” or showcase other art forms.

Food and beverages will be available for purchase, and vendors will be selling steampunk-inspired fashions and accessories. The car show continues at 3 p.m. Saturday with a fashion show of outfits that coordinate with the art vehicles, and music from 4 p.m. to 6 p.m.

The Obtainium Cup rally will start at 11 a.m. Sunday in Alden Park, at Walnut and Eighth streets on Mare Island, and this, too, is a free event.

Spectators can get a close-up viewing of the entries prior to the race. A beer garden and food vendors will open at 1 p.m. Sunday, and live music will keep spectators entertained prior to introductions at 2:30 p.m.

The rally starts at 3 p.m. and spectators may walk or ride to see the challenges, which will be within walking distance of Alden Park.

The awards ceremony starts about 5:30 p.m., but prizes don’t simply go to the fastest contraption. Some awards have titles as creative as the vehicles that win them.