California’s latest $139 billion General Fund budget that will be put in place with Governor Jerry Brown’s signature, increases state spending by 9 percent, and increases appropriates to education and earmarks $500 million for homeless programs.

The budget was approved by both the Senate and Assembly Thursday.

Some in Sacramento have praised the compromise Brown made with Senate President Pro Tem Toni Atkins (D-San Diego) and Assembly Speaker Anthony Rendon (D-Paramount) that increased his May Revise budget by about $1 million and increased the state’s savings.

But others have noted the spending increase is triple the rate of inflation, and dislike the document’s substitution of the word “investments” for spending. Critics also have questioned whether the budget is truly balanced while it has large unfunded liabilities, most notably in dynamically increasing pension costs.

State Senator Bill Dodd (D-Napa) who represents Martinez in the Senate, likes the budget. He called the document “a solid base that we can build on over time.”

He explained, “The budget strikes a balance between meeting the most pressing needs of Californians and building our rainy day fund for a time when the economic outlook is not as bright as it is today.

“It is fiscally responsible and uses no gimmicks to invest in critical areas like public education and infrastructure while making real progress toward other goals including bolstering our wildfire prevention.”

He praised it for funding kindergarten through Grade 14 at $78.4 billion, the highest in the state’s history and including a $3.6 billion increase to local control funding for schools.

Assemblymember Tim Grayson (D-Concord), who represents Martinez in the Assembly, said, “The Governor’s proposal to invest in critical infrastructure, catch up on billions of dollars in deferred maintenance at our universities and courthouses, and increase spending on social services for homelessness, mental illness and other health care coverage should make a noticeable impact in our communities.”

But he is among those in the Assembly who wants the state to keep building its reserves so California is better prepared to weather economic downturns. The compromise budget adds another $2.2 billion in state reserves and maxes the California “rainy day fund” at about $14 billion.

The budget also tries to keep college education affordable by adding $105 million in ongoing funding and $155 million in one-time funding to the California State University system and $188 million to the University of California system to avoid tuition increases and to pay for deferred maintenance, he said.

California State Chancellor Timothy White issued a statement that said the money “is viltal to our state’s future.” His statement and one issued by the University of California promised tuition would not be increased during the 2018-19 academic year.

The budget underwrites instruction and other services to the state’s 6 million students in grades kindergarten through their senior year in high school. The May revision to the proposed budget sets $96.2 billion aside for all kindergarten through 12th grade education programs, based on the formula detailed in Proposition 98, approved by voters and effective since Fiscal Year 1988-9.

The analysis noted that when Brown took office, the maintenance factor balance was $11 billion, but that balance has been paid down since then, and with the adoption of the new budget, it should be eliminated at the conclusion of the 2017-18 fiscal year.

The budget uses one-time and ongoing revenues to pay down debts owed to schools and to provide full funding for the Local Control Funding Formula that decides how individual school district receive state education money.

It earmarks $3320 million more to cover the projected cost of living adjustment of 2.71 percent, and adds another $166 million to increase the formula by a total of 3 percent. That money will support core programs and services as well as some local key investments.

Brown also said $200 million in ongoing Proposition 98 money should establish a kindergarten through 12th grade component in the Strong Workforce Program to offer career technical education programs (CTE) to meet communities’ needs for skilled industrial workers and those competent in other fields.

Other increases would provide more money for those who need training in English, would trade a $21.1 one-time increase for a $3.6 million General Fund decrease for charter schools, funnel federal money as well as state resources to help schools impacted by the state’s wildfires in October and December 2017, fund more early mathematics education for those from prekindergarten to third grade, add $5 million for California Collaborative for Educational Excellence services, boost services to school districts in fiscal distress and compensate others when local property taxes decline.

For the state’s poor, more than 13,000 additional children will receive subsidized care. Those receiving welfare assistance through CalWorks will received increased grants designed to raise their income to 50 percent of the federal poverty level.

It earmarks $500 million in emergency grants to cities and counties dealing with homeless populations. Housing vouchers, shelter construction and other programs could benefit from these grants.

In recognition of a growth in mental health issues, the budget would call for $100 million in General Fund money during three years to expand and develop county diversion programs in the 15 counties with the highest referrals to state hospitals.

In support of that, $5 million from the Mental Health Services Act funds would be used to help conties develop innovative plans to divert the mentally ill from law enforcement situations to community-based programs. 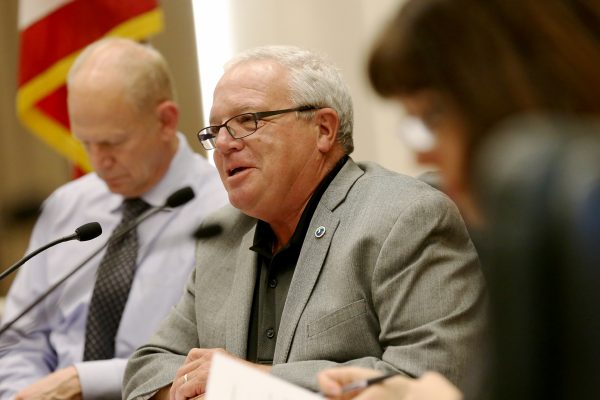