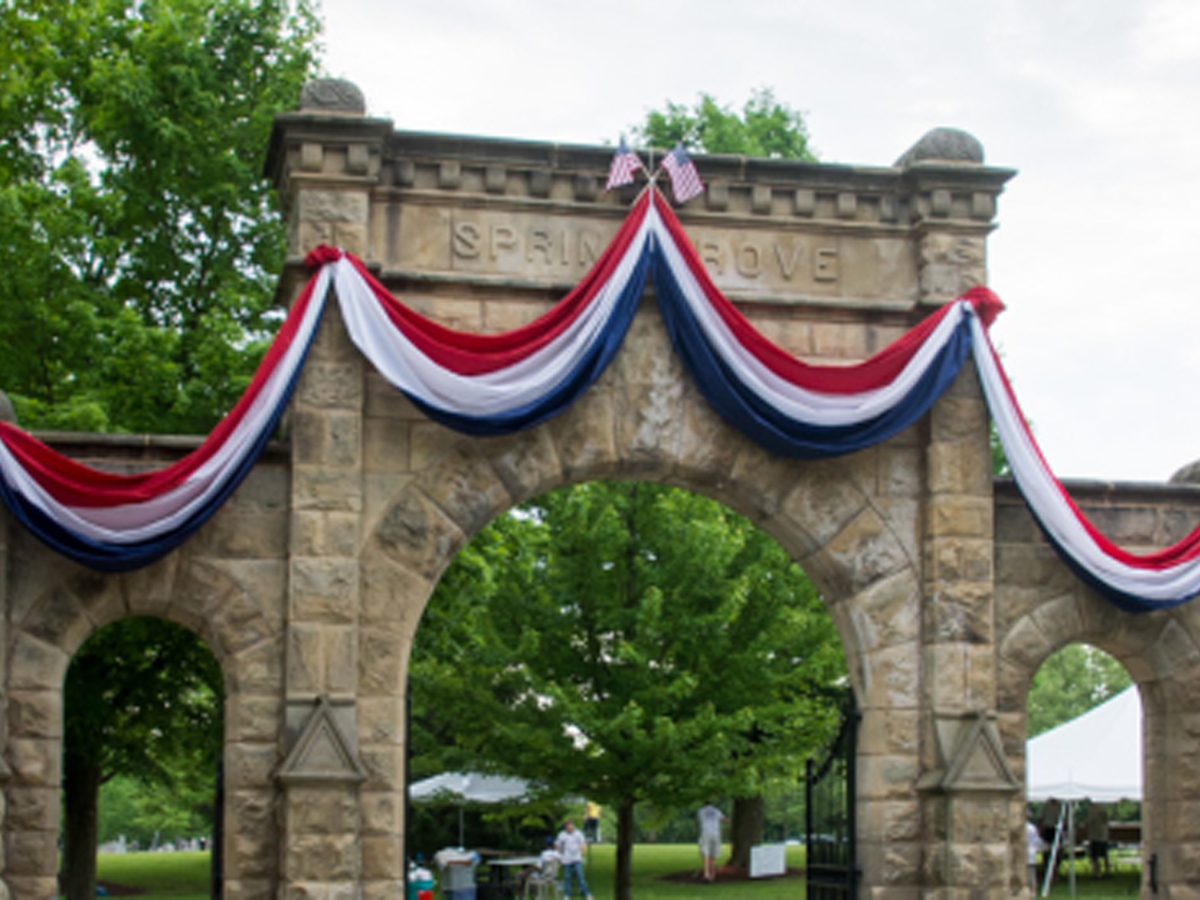 By JOSEPH & JUDIE PALMER
Special to the Gazette 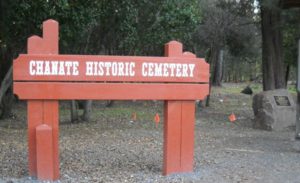 Our column this week is different, however fear not, new biographies are in the works. The huge interest in genealogy has inspired nationwide cemetery restoration to become a large growing movement. Today as we have chosen to focus on conversations with three remarkable individuals. They are the founders and organizers of their respective community restoration projects.

Our first conversation was with Teresa Merkle, Cemetery Commission Chair for the City of Medina, Ohio since 1995. Medina owns both the Spring Grove Cemetery (Est. 1883) and the Old Town Graveyard (Est. 1818). She’s also the founder and President of Friends of the Cemetery (Est. 1997), a nonprofit dedicated to the preservation of both.

For Teresa, cemetery restoration is deeply personal as her baby daughter Megan and her infant granddaughter are buried in Spring Grove. Over time, she became concerned about its lack of care and deterioration. Teresa: “I went directly to the mayor with my complaints. He told me the City’s Cemetery Commission had been defunct for many years and asked me to become the chairperson and revive the Commission. That was 24 years ago…”.

“In 1997, I co-founded our non-profit Friends group after lobbying to have a Master Plan done for our cemetery. One of the Master Plan’s recommendations was to form a not-for-profit advocacy group which we did.” Once the plan was approved, future projects were made easier as issues raised by city officials, or the public were addressed throughout the process.

Asked about the importance of the cemetery she stated, “Our cemetery is a crown jewel of our city. It was established in the 1880’s following the pattern of the “rural cemetery movement” or “garden cemetery” which became popular after the Civil War. It was designed to be a park not only for burying the dead, but for relaxation and repose for the living. Our 34-acre cemetery has winding drives, lakes, open meadows, hundreds of trees and plants, and several historic structures. It is important to me that my fellow citizens realize what a treasure it is, not only because of its historic significance, but also for the other amenities it offers, including exercise (walking, jogging, biking), nature (bird and animal watching), diverse trees and plants, peacefulness and so much more.” Additionally, besides weekly cemetery burials, “We also hold special events a few times a year…” she added.

Lastly, she stated, “Our cemetery is the final resting place for our city’s founders and others who have made our city the wonderful place it is today. It is also listed on the National Register of Historic Places” and “…is the largest park and green space in the heart of our ever-growing city.” Her nonprofit has over 200 engaged members, focused on maintaining this vital resource for generations to come.

Our next conversation was with Jeremy Dwight Nichols, a retired Silicon Valley manufacturing engineer with a physics degree and author of “Cemeteries of Sonoma County, California: A History and Guide” (2001), and “Potter’s Field” (2009). He’s also the former president of the Sonoma County Historical Society, a self-described Cemeterian, and responsible for the rediscovery and restoration of the Chanate Historic Cemetery (Est. 1874 – 1944).

For Jeremy, answering why a relative was buried in Healdsburg’s Oak Mound Cemetery piqued his curiosity. As he found answers, he thought about other genealogists, historians, and researchers. This led to the writing of his first book focused on the history of all Sonoma County cemeteries and the discovery of a number being rundown. Their condition bothered him.

Jeremy: “One cemetery that especially stuck in my craw was the Old County Cemetery on Chanate Road. What an unfriendly act, I thought. Bad enough that these unfortunates had to be buried here, but then to have the cemetery all but abandoned! For me, each cemetery is like a history book and each person buried there has a chapter, however brief. I find it fascinating that all of these people have stories, and some are actually very interesting stories – places they’ve lived in, places they have visited, done business with, or what have you.”

To the county’s credit, in 1987 the area had been designated to become a parking lot. Staff discovered the abandoned Potter’s Field and chose to save it. However, after initially clearing the site they lacked funding to do more, abandoning it again. From his book “Potter’s Field” Jeremy describes it as, “… a place of burial for those who had no family, friends, or money to provide for themselves. “Pauper” cemeteries like this one also served as one of the few places where disadvantaged groups could bury their dead…” When Jeremy returned in 2003, he found it again overgrown with weeds, poison ivy, and a few “soup can” grave markers, but nothing else.

Jeremy: “I thought about the county cemetery more and more and finally decided to see if something couldn’t be done.” That August he met with county staff and the question was asked, “What can we do with volunteers and donations?” Jeremy: “In response, I offered to look for donations, Parks offered to have some United Way “Day of Caring” volunteers begin a clean-up the very next month, and the Architect’s office made their historical files available to me for research.” Jeremy approached the Sonoma County Historical Society about facilitating donations. Not only did they say yes but (much to his surprise) they immediately drafted him to the board, and later elected him President.

Jeremy: “Community response was excellent. Contributions in time, materials, and cash have exceeded $50,000 over the years. The significance is that the county government really did care about those it buried: you can see it in the meticulously-detailed specifications listed in the published request for bids to bury the “indigent dead.” You can see it in the response from those descendants I was able to locate. You can see it in the two separate ceremonies sponsored by the county, one for the cemetery itself and one for the monument with all the names.” During the restoration it was renamed the Chanate Historic Cemetery and has become an important cultural resource invoking immense community pride.

Our last conversation was with Janet Ramirez, social worker and force behind the County Home Cemetery restoration (Est. 18??) in Fremont, Ohio (formally Sandusky County Cemetery). Like many, this Potter’s Field was linked to a poor house named the “County Home”. Unlike our other two interviewees, her project only began two years ago.

Janet: “The first time I noticed a grave needing a tombstone was when I was 10 years old. I often went with my mother to water flowers on her mother’s grave. I would walk among the tombstones and found a lone bronze stake with just a name and the dates of the person’s birth and death. That made me extremely sad for the person buried there. I was concerned the grave marker could be moved or taken by vandals. I told myself then I would get her a real tombstone when I became an adult and could pay for it. Even now, my 91-year-old mother remembers the name of the woman buried there since I’ve talked about her for the past 50+ years!”

“Sometime in the last 10 years or so, a tombstone appeared, and it had the deceased’s name on it, and then said, “By Daughter.” I don’t know who the daughter was, but it makes me so happy to see that someone had gotten a tombstone for Augusta Nellie Smith after decades without one! Since I no longer needed to get a stone for her, I apparently had to find a bigger project. Haha.”

Unlike Teresa or Jeremy, there is not yet any nonprofit involvement. Janet: “The cemetery is owned by the county and I’m in touch with our Commissioners office and other county staff. We have been given permission to try to improve the appearance of the cemetery. I’m happy to do this and hope that I can be more active with it when I retire in a few years.”

“As far as the community is involved, there is very little knowledge about the cemetery and how many people are buried there. Some residents think it’s not an important project because, as I was once asked, “You know that is for the indigent, don’t you?” Even a local historian who wrote a book about our County did not include the County Home Cemetery in her writings. In fact, she thought there were only one or two people buried in the cemetery when in fact there are several hundred at a minimum that we know of. …Unfortunately, there are no records for burials prior to 1881. One exciting find was a possible Civil War soldier buried in the cemetery, …My hope is to make people more aware the cemetery does exist and deserves all the respect of any other cemetery.” Luckily, the Rutherford B. Hayes Presidential Library nearby has become an excellent records source.

Janet added, “…I’ve been in touch with a few of the siblings whose parents are buried at our County Home Cemetery. The siblings were young teenagers at the time of their parents’ untimely deaths (at different times) and they had no financial means for burying their parents. These siblings continue to visit the cemetery regularly and are actively involved in volunteering and supporting our group goals for the cemetery. They are definitely one of the reasons I want to do this.” Her cemetery group Facebook page currently has 400 members.

Judie and Joseph Palmer are two of the founding members of the Martinez Cemetery Preservation Alliance (MCPA) and the Potter’s Field Restoration Project. The MCPA is always looking for any information or photographic evidence regarding the Alhambra Pioneer Cemetery, Potter’s Field, or its residents as well as monetary or material donations to finish this and other future projects. If you have anything to share, would like to donate, become a member, or volunteer, please visit their website martinezcemetery.org, email them at martinezcemetery@gmail.com or call them at (925) 316-6069.

Underground Echoes: In our outdoor museum, past lives matter