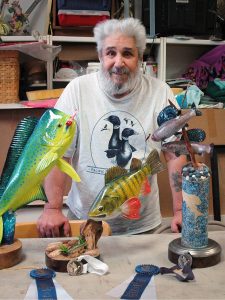 “Hunters and fishermen are among the most the most environmentally concerned people,” he replied. “Do you know the California State Department of Fish and Game gets no money at all from the General Fund? The money all comes from hunting and fishing licenses.”

“Do you see all the wild turkeys around here lately? That is because of the Turkey Federation. They hunt turkeys.

The CWA supported the establishment of the Pacific Flyway Center at Suisun Marsh, home to about 6,000,000 waterfowl, Marieiro reported.

“The whole history of this area revolves around hunting and fishing,” he declared. “The Italians and Portuguese came here because of the fishing.”

The Teal Club in Suisun touts itself as the “Oldest Duck Club in California,” established in 1882.

That history, and being surrounded by an area with wildlife in this area inspired him to start replicating it at age-15, a few years before he moved from Pinole to Martinez.

Initially, Marieiro initially worked with redwood, carving fish and birds. “I thought I was pretty good carver until I saw Mario Marchi’s work. “It was unbelievable! He did wonderful work with birds. He taught me so much.”

Marieiro’s detailed focus on wildlife anatomy and coloring linked him to a 30-year career as a taxidermist, and by extension, a higher level of excellence as a woodcarver.

Every feather or fish scale is textured with a stone or by burning the wood, then subtly colored by hand or airbrush with acrylic paint, according to the carver.

“Before we start to carve anything, I tell my students to study their subject,” he said. He encourages them to notice every detail, shape and color shading, then visualizes the round piece of wood (Tupelo Gum).

This close-up scrutiny of wildlife provoked Marieiro to action when he became aware of waterfowl deaths caused by a 144-acre, IT Corporation owned, toxic waste ponds.

Marieiro recalled the crisis of the late 1970s, “The birds would fly through the fumes and land in it. They would never come out because they would die from the chemicals and acid,”

Rallying neighbors, he tenaciously appealed to the Contra Costa County Board of Supervisors to find a way to shut it down. Soon the Sierra Club and Green Peace joined the fight, he said. That was the birth of his years of environmental activism to protect the subjects of his art/craft.

Now Marieiro teaches two woodcarving classes a week for men, women, and teens who want to create a wildlife replica out of wood. One day and one evening class are at the Frame Shop on Ferry Street. According to Marieiro, some older students harbored their interest in woodwork until retirement offered enough time to explore it. “I have students in their 70s and 80s,” he commented.

“A lot of my students are in college now,” he said proudly. Alhambra High School graduate Alan Kobylick is one of them. Alan was one of two AHS students chosen to attend the Air Force Academy.