MARTINEZ, Calif. – Martinez’s Memorial Day programs, at the Alhambra Cemetery and at Ignacio Plaza, will resemble those of the past.

But this year, there will be one difference, expected to be prettier and more meaningful.

This year, when the wreath is placed at each ceremony, the flowers will be live rather than artificial.

At 22 inches across, it also will be a little larger than the 19-inch artificial wreaths of the past.

Richard Cheney, representing the Veterans of Foreign Wars Post 1351, said his organization has offered to pay for live wreaths for both the Memorial Day and the Veterans Day celebrations this year.

After those ceremonies, the organization will seek comments from the public to determine if this year’s change should be made permanent.

The American Legion Post 29 also has offered to match the VFW expenditures, members of that organization have decided.

Cheney said his organization pondered the matter, because much of its fundraising is used to help veterans. He said the decision came down to whether live flowers “would be meaningful to the city.”

That is why the VFW wants to see “how the community responds,” he said, calling the live flowers “a one-year experiment.”

Across the wreath will be a wide ribbon that will say “Martinez Remembers its Veterans and Fallen Heroes.”

The wreaths, one for each holiday, are estimated to cost $400 total, he said. Subsequent wreaths are expected to cost less, he said.

The suggestion pleased the Martinez Veterans Commission, which met Tuesday to discuss the Memorial Day program.

“This is a great idea – thank you,” said Commissioner Ingemar Olsson.

Since the flowers used in the wreath may last as long as 10 days, it could be placed in City Hall as another place in the city that acknowledges the contributions of veterans and those who have died in conflicts, said Shane Bower, chairperson.

“Fresh flowers are better than silk or plastic,” he said. “I don’t see any issue whatsoever.”

Existing permanent wreaths could be used at the city’s Veterans Memorial Park, at Alhambra Avenue and Berrellesa Street, he suggested. But no action was taken on that point.

Since past programs have been well-received, the Commission will use them as blueprints for this year’s Memorial Day ceremonies, although Bower said if members decide modifications might improve the celebration, they should be considered.

At the Alhambra Cemetery, the program will start at 8 a.m. May 28 with Scott Parker on bagpipes, a prayer and a flag raising by U.S. Navy Sea Cadets and the League of Cadet Corps Diablo Squadron.

Scouts will lead the pledge to the flag, after which Bower will give a welcome and Sea Cadets will place the wreath. The program will conclude with a benediction and “Taps,” which Jennifer Oertel will be asked to perform.

The longer Ignacio Plaza program will start at 10 a.m. the same day with Parker’s pipes, a prayer and the Sea Cadets and Cadet Corps raising the flag.

Martinez Community Chorus, led by Gail Haefke, will sing the national anthem, and Scouts will lead the pledge to the flag.

Bower will make initial introductions of those who will announce Mayor Rob Schroder, who will welcome those attending, and representatives from other elected officials.

The main speaker has not been announced, but Commissioner Ingemar Olsson will offer a remembrance of those who have fallen in service.

Martinez Community Chorus will sing another selection before the laying of the wreath by the Sea Cadets and Cadet Corps.

The program concludes with a benediction, a 21 gun salute by the American Legion Post 29 and VFW Post 1351, and “Taps” by Oertel.

The Commission expects to meet one more time before the celebrations, and will complete the program’s plans at that time. 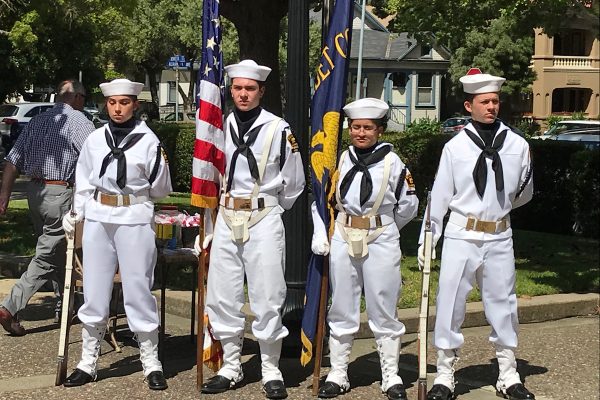 Park It by Ned MacKay: Memorial Day in the parks