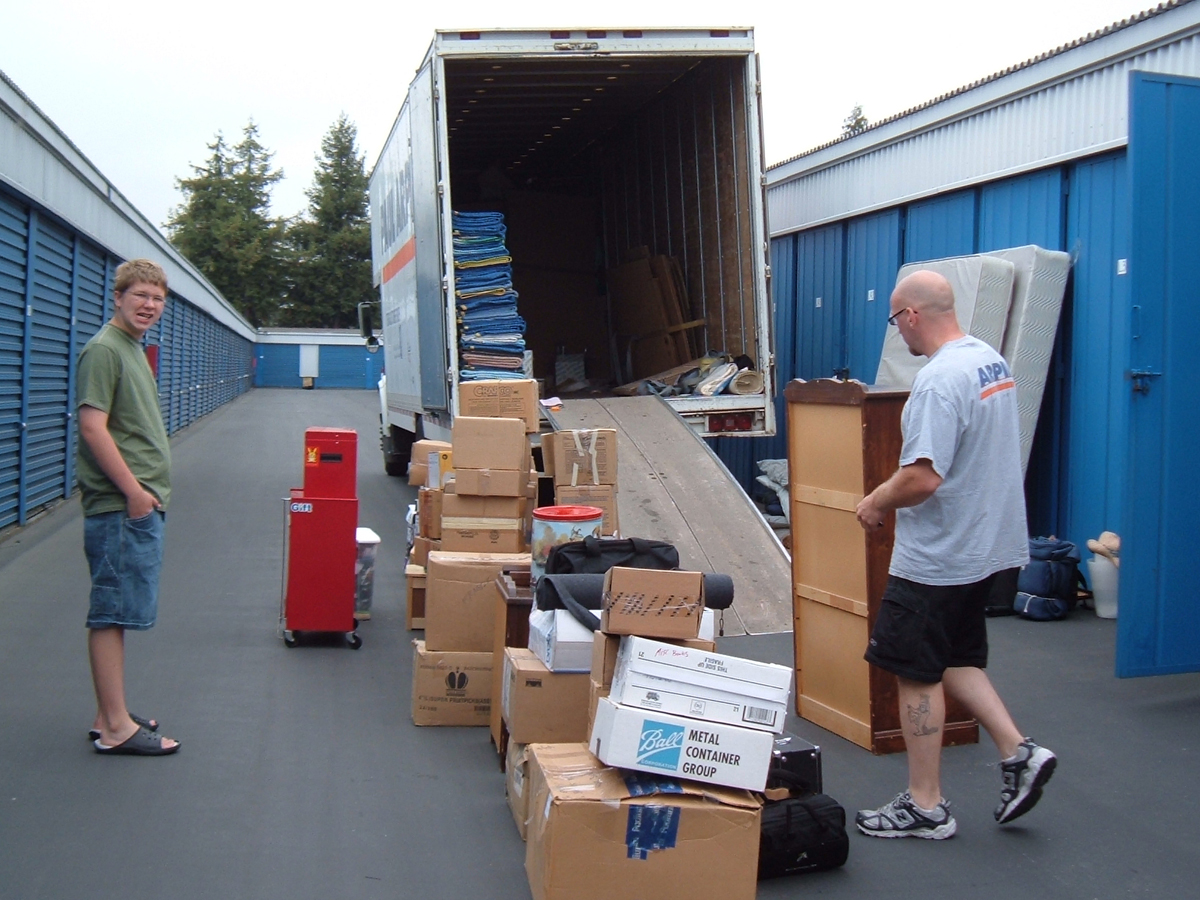 I was walking around my neighborhood yesterday and noticed three different families moving. One house had a Pods container in the driveway. People were carrying boxes from the house to the container like ants carrying food to their nest. Four doors down I saw a house with a 26 foot U-Haul truck parked at the curb. It was halfway unloaded and the workers were taking a break. On the next block was a truck from Waters Moving & Storage. The doors were open and the ramp was in place for loading.

According to data from the U.S. Census Bureau, the average person in the United States moves residences more than eleven times during his or her lifetime. This is a lot compared with other countries. In 2016, Re/Max real-estate company conducted a survey of European residents from sixteen different countries. The typical respondent moved only four times during their life.

Moving makes me nostalgic. Growing up, our family moved every 2-7 years. After we were married, Vivian and I picked up our little family and moved across the country or to a different country nine times during our 20 years in the Air Force. Since leaving the service in 1997, we have moved only once, to Martinez, 16 years ago. Vivian and I have lived in Martinez the longest of any place we have ever lived, before or after getting married. Other people tell me that Martinez is like that. People seldom leave.

Having moved so often, I have learned a few things. Here are my five lessons on moving:

Lesson one: Stuff is going to get broken, no matter how carefully you pack. There is no way to tell what it is going to be. It could be a priceless antique or a worthless tchotchke. You must resign yourself to the fact that something will get broken. I have seen just one dish get broken in a whole big box of dishes. Vivian’s cedar chest got scratched in our last move. This is her second cedar chest. The first one lost its drawer and lid a couple moves ago so could not be repaired. We bought the second cedar chest and now that one is gouged.

We once had a big wicker basket shaped like a swan. Vivian found it in Manila many years ago and it followed us home. During one move, the poor swan got crushed beyond recognition so we put it in the pile for trash. Two weeks later, when transferring the pile to a dumpster, we found the basket was good as new. The high humidity in New Jersey was similar to the Philippines – hard on people but excellent for wicker baskets. The swan lasted two more moves before it finally fell apart.

Lesson two: Curtains never fit. Every new place we ever lived needed new curtains. Being a thrifty sort of fellow, I saved all the curtains. As we moved in, I would unpack my big box of curtains and walk each pair around from room to room. Invariably, the windows were too tall, too wide, or the wrong color for drapes we already owned so we would have to buy new pairs. After twenty years, I donated thirty-five pairs of curtains that didn’t fit anything to the thrift store. Now somebody else can walk around from room to room.

Lesson three: You are going to pack something you need. Once I had to walk barefoot off a cruise ship in San Francisco because I packed all my shoes in checked luggage. After moving a few times, we came up with a practice of hiding things in the car on moving day. Passports, money, credit cards, travel clothes, medications, school records, airline tickets and other essentials were safely locked in the car trunk so they did not end up on the moving truck.

Lesson four: Moving is stressful. Once the moving starts, it has a momentum of its own. You are no longer in complete control. Vivian and I do all our planning months ahead of time: research all the options, make decisions, prepare a schedule, assemble checklists, coordinate with those involved. During moving days, everything comes to a head and the train sometimes leaves the tracks. After moving so often, we know that things will not go exactly as planned and that we will survive because we have gone through this before and have always survived. The key is to keep a positive outlook. My attitude on moving day is “What will be will be.”

Lesson five: Not everything will fit because every house is different. The breakfast nook that fit perfectly in one house has no place in the next. The new house has no sewing room so you must buy ten plastic storage tubs for fabric and keep them in the basement. Years ago we gave our old, worn out couch to a niece on her way to college. She was thrilled. College students love to get anything, because they have nothing of their own. Coming to Martinez, Vivian and I traded a five bedroom, 2,700 square foot house for one with two bedrooms and 1,200 square feet. We had to get rid of a bunch of stuff after we arrived. Some of it went to the kids. Some of it was sold. A lot of it went to the Salvation Army.

If you know ahead of time that everything will not fit, the best option is to get rid of it before the move. That way, you don’t end up schlepping heavy boxes unnecessarily. Many times, I have opened a carton and asked out loud “Why in Sam Hill did we pack this junk? There is no place to put it. Now we have to call Salvation Army again.” Every time we moved, I said that about my box of curtains.

All of our previous moves were work related. Vivian and I are both retired now so there is no reason to move. Then again, there is no reason not to move. Yesterday, our daughter in Seattle asked if we wouldn’t like to buy a place in Washington to be nearer our oldest granddaughter. The day before, our son asked if we would like to come to Omaha to spend more time with our other granddaughter and grandson. Our daughter who works at Yosemite NP suggested we could find a really nice place in Mariposa to live near her. My attitude is “What will be will be.” In the meantime, I am going to walk back and ask the neighbors how they like Pods Moving Service just in case.