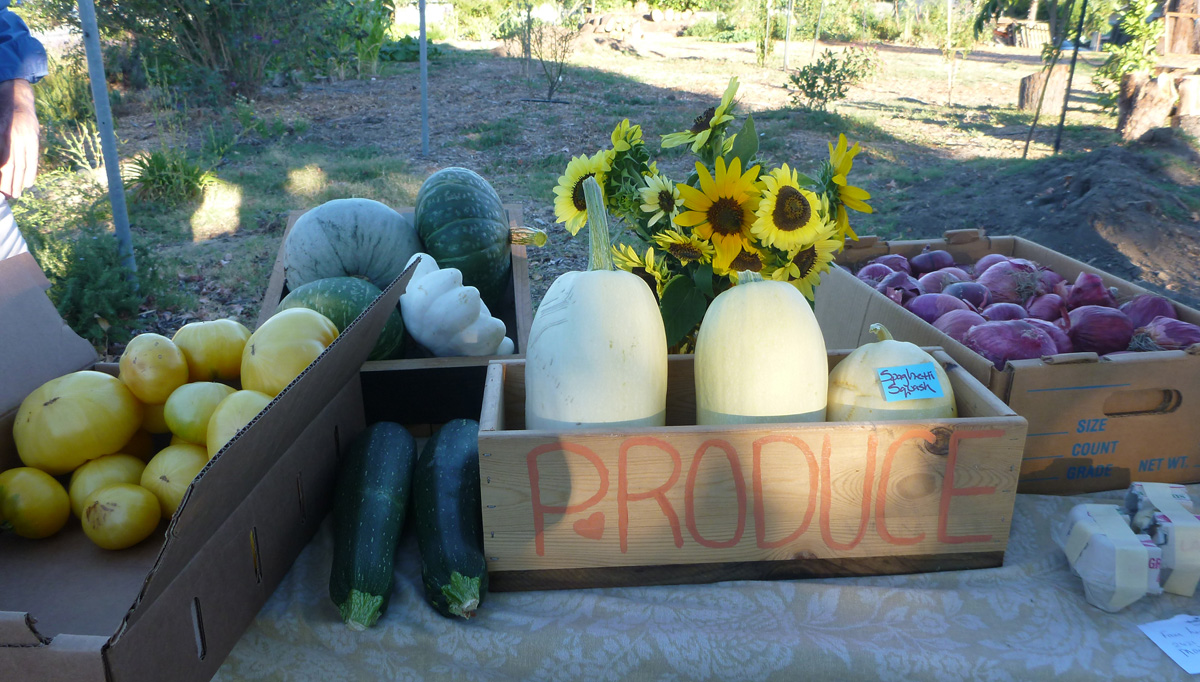 From time to time, Vivian and I end up with an excess of produce. I have written in past columns about our sudden abundance of apricots, peaches, artichokes, lemons, and walnuts. One never knows when a windfall of something delicious will blow one’s way.

When I was growing up in Santa Cruz, neighbors used to leave zucchini on our porch, ring the doorbell, and run away. Someone told me the joke about a woman who grew the world’s largest zucchini and wanted to show it to her friend. She put it into her car but the zucchini was so large, it stuck out the window so she couldn’t lock the door. After stopping at a convenience store to buy batteries for her camera, she returned to her car to find something awful had happened… someone had left her the world’s second largest zucchini too!

The challenge is always to find ways to preserve this abundance of produce before it rots and is wasted. Some of it, you can freeze. We have a couple pounds of walnuts in the freezer right now. Some of it, you can dry. I have dried plums, apricots and apples in the past. Some of it, you can can. Vivian and I have homemade apricot and peach jam in the pantry ready for Christmas gifts. You can also candy fruit, smoke meats, ferment vegetables, and salt just about anything. Someday we will try these methods too.

This week I found another pathway for excess produce, the monthly Crop Swap in Pacheco. This is an event where anyone can bring their excess produce and return home with something different. The organizers keep it simple. There is no website or Facebook page. I found a little article on Nextdoor that piqued my interest.

I spoke with Jennifer Brennan, one of the co-founders of the Pacheco Crop Swap. She told me that the idea sprouted in 2013 during a conversation with Dave Mudge at the Center Avenue Community Gardens. The gardens were producing so many extra crops that participants felt compelled to share. The community gardens are now gone but the Crop Swap continues.

Brennan explained, “Our Crop Swap meets on the fourth Wednesday of each month, April through November, and retains its grass-roots makeup. I have recycled all my life.” She continued, “This is a simple way to use food that might otherwise be wasted. There is no registration or sign-up. There is never any money involved. Anybody can attend, even if they don’t bring anything to share.”

Attendance varies each month but is typically between 15 and 40 people. The highest ever was 60. “If everyone who has ever attended came all at once, we would have over 1,000 people,” mused Brennan. “There are other crop swaps across the nation, but we did not model ours after any of them,” Brennan clarified. “The Pacheco Crop Swap is tailored for our community.”

The Pacheco Crop Swap is designed as a family event. Attendees range in age from 1 year old to 80. R.C. Ferris, the locally famous recycling lady from Pacheco, comes every month. She often brings something interesting for the children.

“In the beginning, our first swap of the year was in March but that was quickly revised because the only thing people had to share was a lot of lemons.” continued Brennan. The swaps now start in April and display a much greater variety of crops.

Some of the crops found at a Pacheco Crop Swap include tomatoes, oranges, lemons, squash, apples, nectarines, grapes, and cucumbers. People also bring eggs, honey, herbs, nuts, seeds, plants, canned goods, baked goods, soup, and small handicrafts to share. I asked Brennan to name the most popular item at a crop swap. “The eggs go quickly,” she said “Soup is also popular.” To my amazement, she told me there is never a problem with too much zucchini.

In November 2013, the Pacheco Crop Swap added a potluck dinner to celebrate the end of the harvest season. This tradition has continued every year since. This year, the potluck will be on November 27 to celebrate the end of their seventh season. Everyone who attends can bring something to share. Organizers ask that participants bring any utensils needed to eat their food. If someone brings soup, they should also bring cups or bowls and spoons (otherwise it is really hard to eat the soup). If someone brings finger food, it would be good to also have napkins.

I asked if anyone had ever taken more than they should. “No, on the contrary, people are reluctant to take all the produce. We have to encourage everyone to take more,” said Brennan. “If there is anything leftover, someone takes it to the shelter.” The goal is to have everything gone by 7:30 pm.

The Pacheco Crop Swap is not affiliated in any way with the Contra Costa Food Bank. If anyone is challenged getting enough food to sustain their family, they need to call 211 or the Food Bank at 855-309-FOOD (3663). CalFresh also offers help.

The Pacheco Crop Swap starts at 6:30 pm when everyone with something to offer puts it on the tables. At 6:45 pm, everyone is invited to take what they want from the tables. For about 45 minutes, people share crops, food, announcements, gardening tips, ideas, and friendship. The whole thing wraps up around 7:30 pm. If anyone would like to help set up the tables, they can come at 6:15 pm. There ample space for vehicle parking at the First Baptist Church parking lot in Pacheco where the Crop Swap is held. Dogs are always welcome.

WHEN: April through November, fourth Wednesday of the month