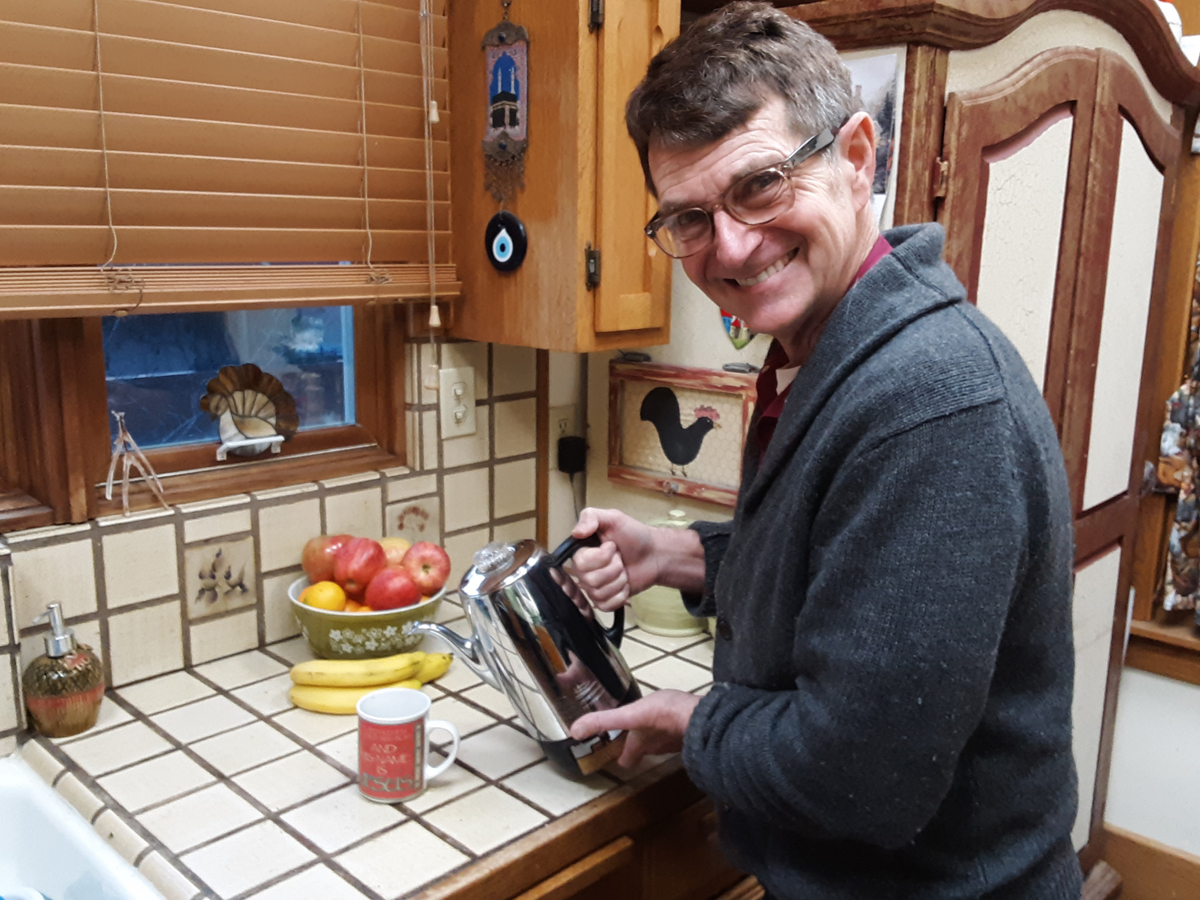 A recent visitor commented on our kitchen coffee pot and I was proud to point out the details. Our Coffeematic Universal 10 Cup Coffee Percolator was manufactured in the 1950s by Landers, Frary & Clark Company at their factory in New Britain, Connecticut and still makes a great cup of coffee. Not that I’m into antiques. On the contrary, I avoid antiques because they are usually sold at a premium price. I purchased our pot at a “white elephant sale” for $4.

I love things that can be repaired. The Universal percolator has four screws on the bottom so that it can be easily opened. There’s a light bulb inside that can be replaced if it burns out. Assuming I can find parts, the pot could last forever.

“Everything in life takes maintenance,” I always say. By that, I mean that every construction, facility, machine, organization, and relationship requires constant upkeep. Without regular attention, all that is man-made will gradually decay and dissolve away.

PBS used to have a television series called “Life after People” which showed how cities would revert back to nature if we stopped maintaining the buildings and infrastructure. The effects would be immediate. After two days, the power grids would shut down. After 50 years, most buildings in Atlanta would be destroyed by kudzu. After 100 years, the Brooklyn Bridge and the Golden Gate Bridge would fall into the water. After only 10,000 years all traces of civilization would be buried under sediment and vegetation. With regular maintenance however, all these things could last forever.

Vivian and I owned our last washing machine for more than twenty years. Over time we replaced the water pump, drive belt, hoses, counterweight, and transmission. We don’t have it anymore because I couldn’t find one particular replacement part after two months of looking. I have not yet taken apart the new washing machine. Hopefully it will be easy to work on.

The way I look at it, if something is broken already, you can’t really do much to hurt it. My practice is to take apart whatever is not working to identify the cause of the malfunction. Nowadays the internet has manuals online for every toy and appliance. The diagrams show you not only how to disassemble things but also the name and number of each part.

So far I have been able to get everything apart with one notable exception. My kids had Fisher-Price See ‘n Say toy. When they pointed the moveable arrow at a letter of the alphabet and pulled the string, the toy would announce the name of the picture and the letter of the alphabet. They loved that toy. Unfortunately, the string broke after a couple years.

My plan was to open it and replace the string. For more than three hours I tried to get that thing apart using power tools, hand tools, and other paraphernalia. The manufacturer was so determined the toy should not be opened that I ended up with a mangled pile of smoldering plastic. The kids were disappointed, but nothing was lost because it did not work to begin with. While researching online decades later, I learned the new See ‘n Say toys use a lever instead of a pull string. Maybe we were not the only family who broke the string and could not fix it.

Toys and appliances are fair game but I no longer take cars apart. New cars are annoying because I can’t repair them. Vivian’s new Honda has a 6-cylinder, 214 cubic inch engine, 280 horsepower, and technology out the wazoo. The rearview mirror alone has a camera, motion sensor and even a defroster. In high school I drove a 1962 Mercury Comet Custom with a 6-cylinder, 170 cubic inch engine, a Holley one-barrel carburetor and 90 horsepower. It was as slow as molasses flowing uphill in winter but easy to work on.

Like all teenagers, I wanted my car go faster so one Saturday I rebuilt the carburetor while sitting on the garage floor with two pairs of pliers, three screwdrivers, and a crescent wrench. The auto parts store sold a kit with instructions and gaskets for $19.95. The performance did not improve as I’d hoped, however the carburetor worked fine after I put it back on the car.

A friend of mine owned a Yugo — the car that was actually made not to be repaired. When the brake pads wore out, we tried to replace them only to find they were riveted on. The concept of Yugo was to salvage the whole car at about 60,000 miles before any repairs were needed. They only cost $3,990 brand new in 1985. The company saved a couple of pennies and a few minutes on the assembly line by riveting the brake pads, and everything else instead of using screws that could be removed and replaced. My friend and I ended up drilling out the rivets and putting in our own bolts, however the car needed other repairs so did not last much longer after that. It was not made to be maintained.

More and more of the stuff is getting to be like that. An engineer friend tells me elevators are now made to be replaced rather than repaired. The nylon fabric on my blow-up lawn ornament is too thin to be patched. The toner cartridges in my laser printer are not made to be refilled (although I found a way to “fix” that). Globally, humans generate two billion tons of waste per year because 99 percent of all the stuff we buy is trashed within 6 months.

When we lived in Germany years ago, our neighbors were amazed at how Americans change cars every couple of years. Many Germans would own their cars for twenty years or more. This, of course, required regular maintenance. People washed their cars once a week and always washed their engines too. Every car was spotless outside, inside, and under the hood. Some of the shuttle busses where I worked had over 400,000 km on the odometer.

To me it makes more sense to repair what you have than to throw it in a landfill or melt it down to slag. Our coffee pot is doing just fine even though it is older than I am. I am ready to take apart anything…unless it is a See ‘n Say.