Can you believe it? I’ve been writing this column for more than eight years. Seems like just yesterday I sent in my first story as an assignment for a memoir writing class I took at the Martinez Adult Education Center. Thank you all for hanging in there!

One of the questions I get when people realize I’m “That Vivian,” is, where do I get all of my stories. I usually answer “Every day I’m alive is another story,” which is very true. Just this morning I saw racoon doing something particularly cute in front of my house while on my walk (but I’ll save his story for another time). I see kids in town just being kids and it sends me back to my own childhood. “Remember when….?” And a story begins. Sometimes, a story drops in my lap, such as a good friend’s anniversary mishap or her thrift shop triumph.

Today, I opened Facebook and found a perfectly marvelous story posted by my good friend, Joy Hakola-Dardin. Joy works downtown Martinez and walks to the Marina every day at lunch, come rain or shine. Sometimes I meet her and walk too. Joy has loved nature all of her life and is my ‘go to’ person for answering nature questions. 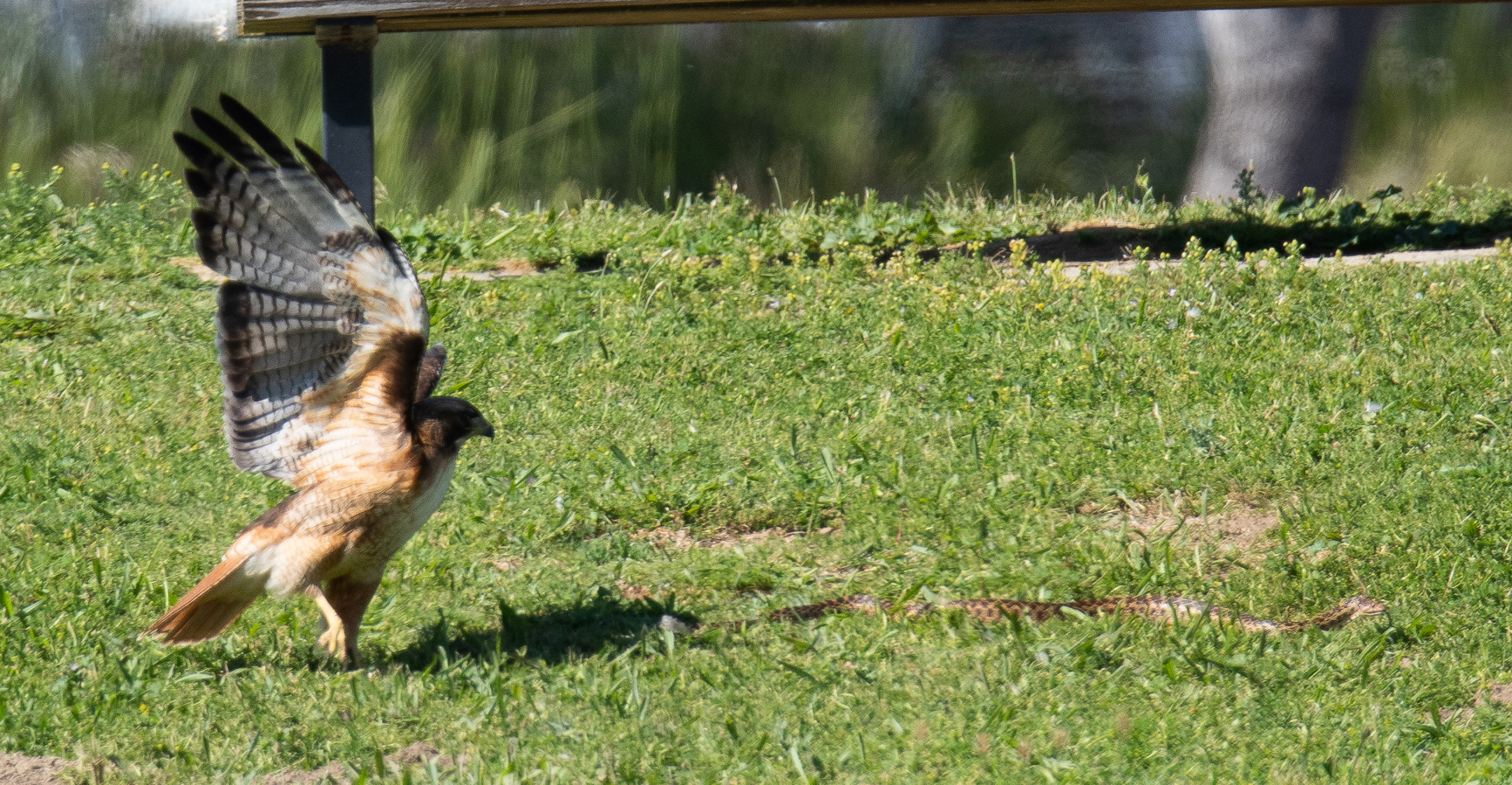 Oddly enough, or maybe not so odd if you know me—my snake story begins with an osprey story.

Many of you know I work in Martinez and walk Waterfront Park every day. I meet lots of people and strike up friendships, especially with regulars. One of the friends I’ve made is a professional photographer, Terry Korpela, who focuses mainly on birds. Yesterday as we passed each other by the estuary he told me about a sighting. He said he saw a white-tailed kite with a 4-foot wing span. I said it couldn’t have been a kite–maybe it was an osprey. He said he’s never seen an osprey in California. I said I’ve seen them here at the waterfront many times. He pooh-hooed me, skeptically muttering how he’s never seen one.

This morning when I opened my email, I saw a photo of an osprey Terry had sent. He said it was odd that we had just talked about osprey and then one should appear. In replying to the osprey photo, I said, See! We have ospreys around here. I told you… I also told Terry I’d have to tell him about the snake encounter I had shortly after passing him.

A few minutes later I received another email from Terry.

The snake story I wanted to tell Terry is this: After passing him on the trail and rounding the corner, two ladies in distress alerted me to a “giant” snake on the lawn. Petrified, and thinking I’d be petrified too, they sought to warn me.

The giant snake turned out to be a 3-foot-long gopher snake.

To get an idea of what happened next, picture this: Instead of heeding the warning of a giant snake ahead, the professional-looking woman in a cream, tan and pastel pink business-type dress (me) heads directly toward the snake. Without pause, she reaches down and picks it up.

I hear the women gasp as I lift the snake’s hind end from the ground grasping it behind the head. What are you doing? they ask. I am rescuing this snake. I fear if I don’t intervene something awful will happen. The snake is heading toward a high-traffic area on an open lawn where the park staff are mowing…. People do the meanest things to snakes. I picture multiple scenarios, none of them are good for Mr. Gopher Snake.

Lifting the snake up I admire its beauty. It is a friendly snake. It doesn’t hiss, flatten its head, or evacuate on me when I picked it up. The ladies are gawking at me. They ask if they can take a picture of me and the snake. I readily agree. Since I have their attention I launch into my spiel about snakes. I explain this is a gopher snake. No, it isn’t heading toward the bread on the lawn. It is heading for the active gopher holes…. No, it doesn’t eat pigeons.

It mainly eats rodents as its name implies. Fascinated by the calm demeanor of the snake moving freely in my hands the ladies begin relax. I ask if they want to touch the snake. One says No way! The other lady says only if you hold its head.

After the first lady touches the snake, her friend, not wanting to be outdone, reaches for the snake’s tail. When the tails curls around her finger she pulls away quickly. She’s surprised by the strength of the muscle. I add that snakes are basically one long undulating muscle. It is how they propel themselves.

After chatting with the ladies for a few minutes, I say my goodbyes. I walk the snake a safe distance from trail and release him. I’m satisfied when he moves off in the right direction.

Excited about my snake rescue I consider circling back to tell Terry. I decide against it thinking I’ll tell him next time I see him.

Cut to the second email Terry sends with the photo. The caption reads, “Red-tailed Hawk vs. Snake: Round 1.”

Imagine my shock as I realize the snake in the photo is the same snake I tried to rescue. Evidently the gopher snake returned to the lawn area… It wasn’t dangerous people who harmed him, it was a red-tailed hawk!

Normally I’m pretty accepting of the dynamics between predator and prey. If I saw a hawk with a snake, I’d think an animal has got to eat. The loss of this snake hit me hard. I felt we shared a bond. I knew this snake!

Knowing the snake’s last act was to assist people in understanding his species helped me reconcile his loss. He was a super chill snake. Having met him made my day.

Epilogue: I hurried toward Terry when I saw him. I had to find out if he saw the hawk carry the snake away. I assumed that was the conclusion. That’s usually what happens with hawk vs. snake—snake loses. But glory be! My heart soared hearing Terry say that he did not see the hawk carry the snake away. Knowing there is a chance my friend the gopher snake is still alive makes me a happy girl. It’s a good day!