“What are you up to?” my wife inquired as I headed out the front door after breakfast. “I am going to put the garbage cans away,” I replied. My wife often asks what I am up to. She sometimes complains that I disappear for hours then return without explanation. That’s silly. Our little house only has two bedrooms and one bathroom. Where would I disappear to?

It was a sunny Monday morning. Our three waste carts were sitting empty on the street. When I looked down, they were in a huge pile of leaves that extended all across the front of the curb. It had been windy the night before. All the leaves in the neighborhood decided to meet in front of my house, right next to the green waste cart with an open lid. This was perfect. I could pick up the leaves before they had a chance to spread.

I have taken several time management classes over the years. One of my favorite takeaways was the “2-minute rule.” It comes from an award winning book called “Getting Things Done: The Art of Stress-Free Productivity” by David Allen. The rule is that if something will take two minutes or less to complete, you should just do it. Don’t think about it, don’t add it to your to-do list, don’t put it off for later. Knock it out immediately.

Heeding this sage advice, I opened the garage, turned on the lights, opened the rolling door, punched the radio, and selected a square-nose shovel. Activating the door, lights, and stereo are my habit on entering the garage. All the switches are right next to each other. In our previous house, I had the lights and stereo attached to a motion sensor so everything would spring to life automatically when you entered.

My garage stereo is great. I have two Kenwood 777 speakers – the only parts remaining of a component system we bought in Japan in 1979. They were top of the line back then with a 15” woofer, two midrange speakers, two tweeters, and two super tweeters in each cabinet. Each cabinet weighs 49 pounds and measures 17”x25”x11”. Speakers today are much smaller and lighter. The Kenwood dinosaurs were too big for our little house so I bolted them up in the garage rafters and found a Kenwood KR-V7070 receiver/amplifier at the thrift store that cranks out 100 watts per channel. The sound is impressive.

Back in the street, I used the shovel to put leaves in my cart. The shovel could not pick up everything so I pulled out the leaf blower and a 50’ extension cord. Before long, the street and sidewalk were spick and span.

I went to put my now half full green waste cart away but the gate would not open. A quick look confirmed that two screws holding the latch were loose. All I needed to do was tighten them and everything would work perfectly. I returned to the garage for a cordless drill and Phillips bit. The drill was easy to find but the bit eluded me for ten minutes until I remembered it had been used on a previous project. It was still on the bench instead of in the toolbox where it belongs. Back at the gate, I bent to install the bit, but the drill battery was dead. Not a problem. I have two batteries. One is always on the charger. Another quick trip to the garage remedied that problem.

On closer examination, the two screws in my latch were rusted and stripped. The drill bit just spun around without tightening. Luckily I have lots of replacement hardware but getting the stripped screws out would be tricky. I went back to the garage and selected a large pair of vice-grip pliers. They worked great. The two screws were out in a jiffy. Back in the garage, I found two replacement screws that matched perfectly.

Back at the gate the new screws turned out to be too small. That is probably why the old screws had loosened up. The holes in the wooden gate post had enlarged over the years. Back in the garage, I selected the next larger size screws and fixed the gate.

I put the can away and returned my electric drill to the shelf, being careful to put the spare battery on the charger. The Phillips bit went in the case in the toolbox where it belonged. Looking up, I was surprised to see that, with the rolling door open, a whole bunch of leaves had blown inside the garage. Fortunately, the leaf blower was right outside and the extension cord still attached. I soon blew all the leaves into a pile and found a broom and dustpan to pick up the leaves and a cardboard box to carry them.

The gate worked flawlessly when I dumped the box of leaves into my green waste cart. The garage floor was spotless. I coiled the extension cord and hung it on a peg. I locked up the garage and was almost back in the house when I noticed the square-nosed shovel still sitting on the curb.

As I bent down to pick up the shovel, a little green patch caught my eye. “Darn it,” I thought. It was right where I had installed new bricks next to the street in September. I had purposely sealed every crack and chink with liberal amounts of mortar to prevent weeds. Now, in spite of all odds, a weed was trying to find a foothold. This was something that had to be nipped in the bud.

Back in the garage, I turned on the lights, stereo, and rolling door then found my gallon of Roundup herbicide with a handy dandy Sure Shot® Wand. I have been working on this gallon for four years. It is not needed often but indispensable for certain applications like weeds in the street. After the little weed received a good dose of chemicals I walked my entire curbline looking for her companions. Not finding any, I put the Roundup and the shovel away and relocked the garage.

Vivian was on the computer when I came into the house. “What are you up to?” My wife eyed me suspiciously. “You missed lunch.”

“I just put the garbage cans away,” I explained innocently, as my Fitbit erupted with chimes and colorful graphics to celebrate that I had passed 12,000 steps. 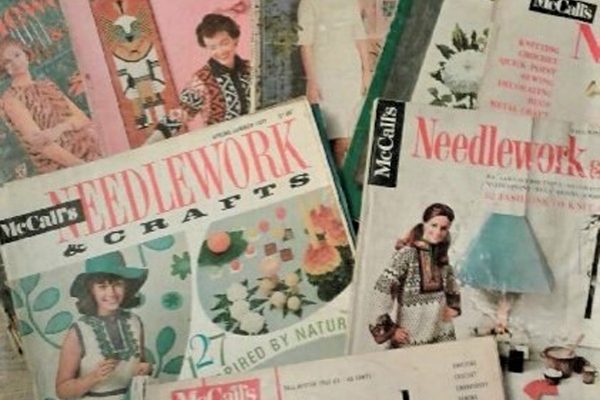 At Home With Vivian: A crafty idea