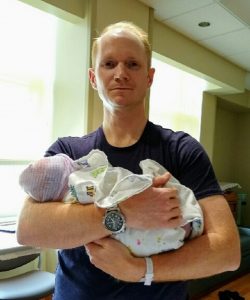 As I write my column this morning (Monday), my cell phone is turned to the loudest setting and is sitting right here beside the keyboard. I’m waiting for an important call from Nebraska. A special call indeed. My son just texted the family that they are on the way to the hospital. Baby Boy Roubal is on his way! We are excited and awash in anticipation! Every time a baby is born, it is always an exciting event.

I remember when my sister Brenda, who was living on the East Coast, had my first niece. I knew she was going to have a baby, but to a seven-year-old it wasn’t something I thought much of until the call came that Teresa was born. Then I was very excited. I was the only one in second grade who was an Aunt!

My sister Karen lived nearby in Pittsburg when she was expecting her first baby. The telephone call came in the morning to let us know that Karen was on the way to the hospital. It was Mother’s Day and my mom, little sister Johnette, and I were just on our way out the door to drive to Colfax for a family reunion at my Grandmother’s house. I was eight years old and with news like that I could hardly contain myself! “I’m going to be an aunt again!” I sang all the way to Colfax. My mother didn’t yell at me to stop. I think she was excited too.

After we arrived, I stayed close to Grandma’s phone even though the other cousins were out playing in the yard. I wanted to be the first to hear the news so I could shout it to the roof tops! The day seemed to drag on forever. Sadly, that important call didn’t come until after we were home again. I was disappointed that I didn’t get to yell out the news to the family, but it was still wonderful to know I had a little baby niece named Robin. And she was as cute as can be.

I was the only second grader who had not one, but two nieces! I bragged about being an aunt. Maybe I shouldn’t have bragged too much because my schoolmates started calling me “Aunt Vivian the amphibian” and making frog-like noises in my direction. Rrrbbbit!! My mother pointed out that I was a good swimmer and was well qualified to be a human amphibian. So, to her mind, it was not an insult. I felt better. Moms can be pretty smart sometimes.

I had one of my best Christmases when I was ten. My two older sisters were expecting babies at the same time. Brenda was due on the second of January; Karen was due the first part of December. I had months to anticipate whether the babies would be boys or girls. Brenda’s husband was in the Navy so her two daughters, Teresa and Susan, were born on the East Coast. I looked forward to getting that telephone call, but I didn’t anxiously await the call like I did when Robin was born. This time, I watched Karen who lived in Pittsburg, and imagined Brenda, as they went through their pregnancies at the same time.

Boy or girl? I was one of five girls. When I was ten, boys had cooties and girls ruled supreme. But then again, daddies are boys and they’re alright. A boy might be okay. I had long discussions on the playground with my playmates about this subject.

The first of December arrived, and a baby did not. The first words out of my mouth every day when my mother came to pick Johnette and me up from the babysitter, were “Is it here yet?” My fifth-grade class had a party on the last day of school before Christmas vacation. Still no babies to brag about. My mother started musing that perhaps they would be born on the same day. Now that was a fun thought for me! Although my sister Karen, who was overdue, did not think it was fun at all.

Finally, on Sunday morning, December 22nd, we got a call. I watched my mother pick up the phone. Her eyebrows shot up, her eyes twinkled, and a big smile spread across her face. I knew what that look meant. I started jumping up and down. “It’s here!” I shouted. Johnette started jumping up and down too. Although at only four years old, I don’t think she quite understood why I was so excited.

“Is Karen’s baby a boy or a girl?” I asked my mom when she hung up. Mama just beamed. She chuckled a little and said it was a boy, but that it was Brenda on the phone! Brenda had a baby before Karen and named him Stanly. I got all warm and fuzzy. We had a baby boy. Instantly I felt that I had wanted a boy all along. Now I was praying that Karen would have a boy too. In fact, I kept one ear open all night, hoping the babies would be born on the same day. But that was not to pass.

Back in the day, they didn’t have all of the newfangled medical paraphernalia that they do now. Today, we not only know what gender the baby will have, but also know almost to the ounce how much it will weigh. I’ve even seen Baby Boy Roubal’s face on a 3-D ultra sound. He’s adorable already and he’s not even here. When my sisters were expecting babies in the 1960s, due dates were just rough estimates. 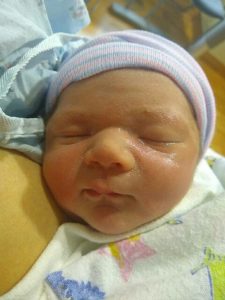 Christmas came. Karen went to her in-laws for a huge turkey dinner at noon. She came over to our house for another turkey dinner at five o’clock. I remember playing with two-year-old Robin and her new toys. We had pie for dessert. It was a great Christmas except Karen didn’t feel all that well. She said it was probably too much turkey. We waited for Brenda’s Christmas call, but with all the excitement, she missed for the first time. Karen and family went home, Mama, Johnette and I turned off the lights and went to bed. The phone rang.

“Mama! I had a baby boy!” I heard coming my sister’s voice coming from the phone in our quiet house. “I know dear,” my mother replied, thinking she was talking to Brenda. “You already told me.”

I heard laughter on the phone and then “No Mama, this is Karen! I just had a baby boy!” I shot out of bed and was hooting and hollering. A boy born on Christmas! How cool was that!

Karen had left our house, felt the pangs of labor and stopped at the hospital on the way home. Baby Robert arrived less than 45 minutes after Karen left our house. Best Christmas present ever.

Well, it’s been fun reminiscing about babies being born. But you know what? I’m going to end it right here because my phone just rang. Woo hoo!!! Yay! Baby Boy, now officially Lucas Edward Roubal, has arrived! Betsy has a little brother! I can’t wait to meet him!