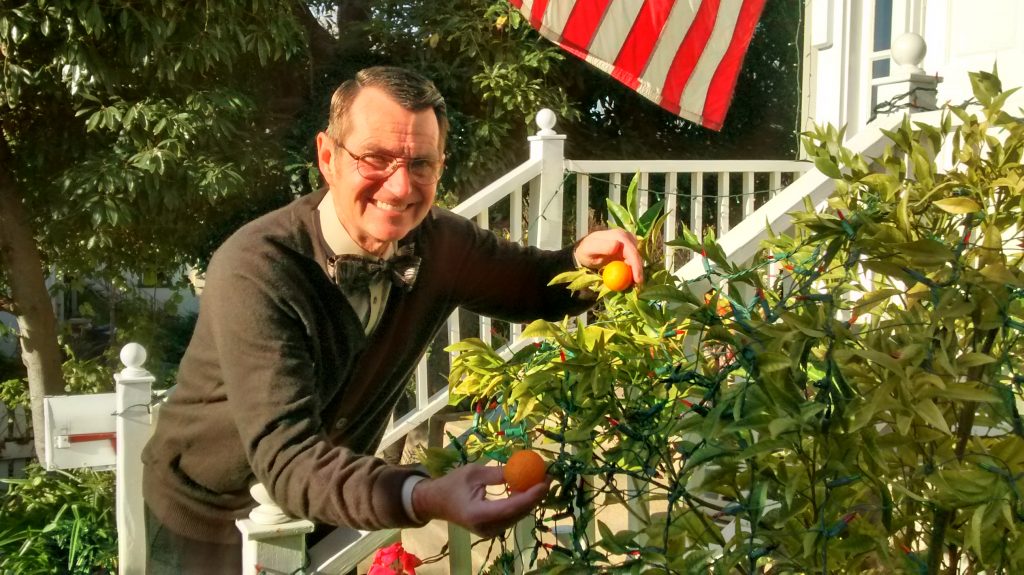 Today my sister in Spokane posted a picture of her car blanketed in snow. My husband Jeff responded with a photo of himself picking mandarin oranges from a tree in our sunny front yard!

After a month of listening to “Let it Snow”, “White Christmas”, and “Frosty the Snowman”, I’m ready for a little of the white stuff myself. It would be nice to see my own breath in the morning once in a while. Isn’t January is supposed to be a time for feeling warm and cozy on the inside while it’s cold and gray on the outside?

School starts again in Martinez next week. I hope the kids are enjoying their days off. I have always liked Christmas vacation. When I was in sixth grade, my mom decided I was old enough to take care of myself and my kid sister Johnette. Mom woke me up just before she left for work each day with a hug and a reminder to check the chore list.

Santa Claus always brought Johnette and me a lot of craft kits, puzzles and books for Christmas. There were enough activities to keep us out of trouble until school started again. We could have watched television all day, but we grew up at a time when we only got three stations even though the dial went up to thirteen. There wasn’t much worth watching on the Sacramento channels three, ten or thirteen. I never liked “I Love Lucy” and, after “Andy Griffith” was over, the television was filled with soap operas and game shows.

One year Santa gave me a kit to make an octopus! The box contained pink yarn, a Styrofoam ball and two googly eyes. It was an all-inclusive kit. I took the yarn and wound it around the empty box as per instructions. Then I took a ribbon and tied a bow around all of the strings on one side of the box. Carefully I slid the yarn off the box and placed a Styrofoam ball under the ribbon, arranged the yarn around the ball, and then tied another ribbon beneath the ball. This became the octopus’ head. After that, I cut the loops at the end of the yarn, divided the strands into eight equal parts, braided each part, and tied the ends with ribbon. Voila! There sat a pink octopus with eight legs.

That octopus sat on my bed for years. The simple kit would have been a creatively satisfying project in itself, but my very imaginative mother encouraged me to take it further. She looked at the finished product and said, “Great idea! I bet you could make other animals the same way.” And so after work the next day, we went to the Ben Franklin store and bought more Styrofoam balls and googly eyes. Johnette and I had a menagerie by the end of the week using Mama’s scrap yarn. Johnette said, “Make a dog!” Then she said, “Make a cat!” I did my best to create the animals Johnette suggested – elephants, rhinos, and a very ugly giraffe. We even made people to take care of the animals. We dressed the dolls with Mama’s fabric and felt scraps. I’m not sure which I enjoyed more; making the yarn dolls or watching Johnette play with them.

The next year, Santa gave me a kit to make a swan out of a bar of Dove soap. It came with white nylon netting, googly eyes, white pipe cleaners, silver and gold sequins, and tiny straight pins. First I set the soap in the middle of the netting, pulled the netting tight, wrapped a rubber band around the excess netting at the end of the soap bar, and fanned it out to resemble fluffy tail feathers. Next, I fashioned the pipe cleaners into the shape of a swan’s neck, stuck the neck into the soap, then glued the googly eyes onto the head. Finally, I pinned sequins into the soap for wings. They were pretty. Soap swans were very popular in the 60s. Everyone we knew had one! Mostly because I made a lot of them to give away.

Styrofoam balls were a popular craft item in the 60s. Another fun craft kit Santa brought me was a caterpillar. The kit came with six balls, one nylon head band (which were also very stylish at that time), two googly eyes, and eight colorful pipe cleaners. The instructions had me cut the head band open at the seam and stuff in the balls. Then I took a pipe cleaner, wrapped it between the balls, and shaped it like caterpillar legs. I glued on the eyes, made antennae and a tail out of pipe cleaners, and voila! There stood a jaunty little caterpillar. Once I figured out how to make them, all of my friends got one! Thirty years later I made three dozen caterpillars for a school function. They were quite a hit. My coworkers thought I was being creative, but it was Santa who had taught me.

On cold winter days during Christmas vacation, when Johnette and I weren’t being crafty, we put together jigsaw puzzles or read books. If it was a rainy day I’d heat up some milk and stir in some chocolate powder. We’d lounge in the front room with our hot chocolate and mentally escape. I’d set the timer on the kitchen stove to go off half an hour before Mom came home from work. Johnette and I would laze around all day and in thirty minutes we could clean the house, do our other chores and get dinner on the table. That system worked quite well for us except on the days we didn’t hear the timer go off.

But we did grow up in California, and as nostalgic as I’d like to get about warm cozy days in front of the fire, I have to be honest. I spent a lot of winter days riding my bike, jumping rope, or pogoing on my pogo stick outside, under sunny skies with no coat.

Today, my sister Johnette posted a picture of her car blanketed in snow in Spokane. Sometimes I long for a little of that white stuff, but then I think about how much work it’s going to be for her to dig out of the parking spot.

My husband is now sitting on our front porch in short sleeves, reading Sunday’s Martinez Gazette, and spitting fresh mandarin orange seeds over the porch rail. There’s nothing like warm and cozy winter afternoons in California.

If you’re looking for books to read or activities and crafts to do during your California winter, check out the Martinez Library at http://ccclib.org/locations/martinez.html. There are activities every month for all ages – Library Story time for toddlers, Needle arts for adults and teens, Drop-in Wednesdays for middle school and high school age groups with games, art, crafts, special guests and more. You can even make a cat castle!