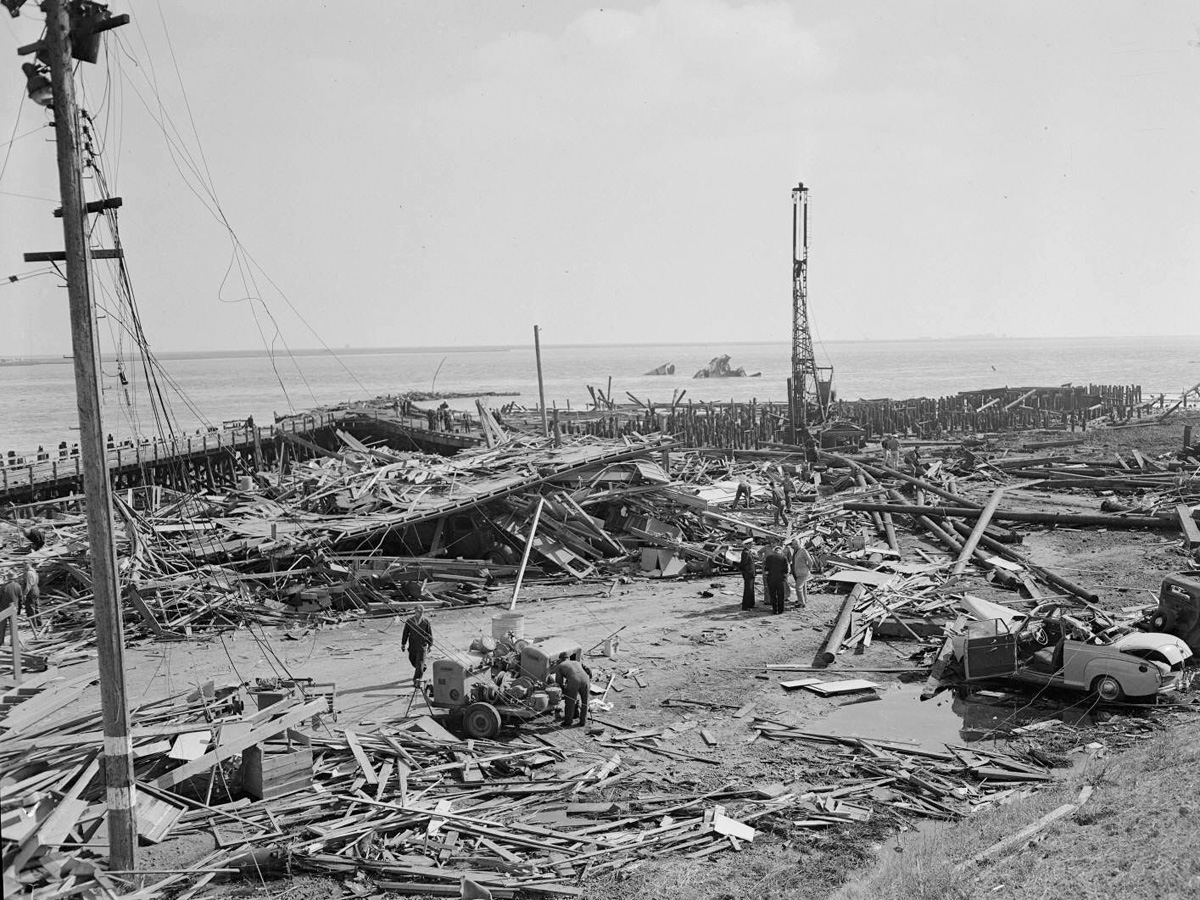 “Oh my,” was all my mother could say. We drove slowly through the desolate landscape of what had once been her childhood home town of Port Chicago. Weeds grew through cracks in the sidewalk. Potholes dotted the former town streets. Only bare traces of concrete foundations remained where homes once stood

It was the early 1970s when Mama and I rolled to a stop, half way down the block, on what was once Lind Street. Mama walked over the ground that had held the house her father built. A rose bush struggled to survive where my Grandmother’s garden used to be. I listened as Mama reminisced.

“This is about where the chicken coop was. I loved falling assleep to the sound of rain pattering on the tin roof.”

As we drove out of town, Mama pointed to palm trees at the end of the road. “I read books and played with my dolls for hours under those trees.”

Port Chicago was a story book example of small-town America until the fateful night of July 17, 1944, when it literally exploded.

In the early 1920s my grandparents, Henry and Minnie Dalton, moved their family to what was then called Bay Point. Grandpa went to work for the refinery at Avon. Grandma and Grandpa built their home and raised eight children.

“It was a wonderful place to grow up,” said Aunt Marion, my mother’s younger sister. “Everyone knew everyone in town and we all took care of each other.”

Only the youngest two sons were still living at home in 1944. The others were grown and gone. Aunt Marion was living in Virginia with her Army husband. My mom and dad were living in West Pittsburg, just a few miles down the road from Port Chicago.

“We heard a big boom; the whole house shook and the windows rattled. Mama grabbed Karen and me and stuffed us between the mattresses,” my sister Brenda recounted when I asked her if she remembered the Port Chicago Disaster. Brenda was a month shy of four years old and Karen was seven that infamous night. “Mama thought we were under attack from the Japanese! She ran through every room in the house and pulled down the shades. Daddy was at work at the steel mill in Pittsburg. Then Mama heard on the radio that Port Chicago had blown up.”

Next thing Brenda knew, they were in the car holding on for dear life as Mama went on one wild ride toward Port Chicago. Grandma and Grandpa were there and Mama was scared that something had happened to them.

Before 1969, if you drove down Marina Vista going east, crossed under the Benicia Bridge onramp and kept on driving for about six and a half miles you’d run into the town of Port Chicago. Because of its prime location near railroads and river transportation, the United States War department built a naval ammunition depot and constructed loading docks for its ships on the waterfront in 1942. The docks were about a mile from town.

The Port Chicago Disaster, as it’s called, has been extensively documented so I’ll only touch briefly on it here.

Two ships were being loaded with ammunition that night. The ships were heading into the Pacific Theater of Operations. Something went terribly wrong. At a little after 10 p.m. the munitions denotated while being loaded onto the cargo vessels. Over 320 sailors and civilians were killed instantly and 390 others were injured. Most of the causalities were enlisted African-American sailors who had been inadequately trained for the job. Too soon, the surviving sailors were told to go back to work loading munitions again. Citing unsafe conditions, hundreds of servicemen refused to continue loading such volatile cargo until it was safe. Fifty men – called the “Port Chicago 50” – were convicted of mutiny and sent to prison. There was such a tremendous public outcry at the unfairness of the “Port Chicago 50” trial that in 1948 President Truman submitted an executive order to end segregation in the military.

The town itself was heavily damaged. Huge chunks of metal and unexploded bombs from the ships landed as far away as Vallejo. Fortunately, none of the bombs exploded. More than 300 buildings were damaged and over a hundred people were hurt, but none in the town were killed.

My Aunt Marion recalled, “I was living in Virginia when the disaster happened, but I went home to Port Chicago a few weeks later. Grandpa was still rebuilding the house.”

The concussion from the explosion broke every window in my grandparents’ eight room house. The heavy solid oak front door blasted out of its frame, flew through the living room, dining room and crashed up against the kitchen wall. The fireplace was blown clear out of the house leaving a gaping hole and bricks scattered in the yard.

“We were the last car they let into town that night,” my sister Brenda bragged. “Mama took back roads and got there quickly. They put up the barricade right behind us. “

The first thing they saw when they got to Grandma’s house was a trail of blood coming down the sidewalk from the porch. The porch was torn away from the house. Brenda and Karen had to jump over the gap to the front door opening. “The house and porch were separated by about a foot or so,” Brenda explained.

The blood was my grandfather’s. He had been asleep in the front bedroom and the flying glass from the shattered windows sliced him up pretty badly. “There was also a family picture hanging on the wall that came crashing down on him,” Brenda told me. She said after the family knew Grandpa was going to be okay, they joked that “the kids” were getting even with their dad!

Several years ago, I asked my Uncle Bill if he was in town that night. He chuckled and said that indeed he was, but that he missed the explosion. I asked him how he could he miss something that big. Well, he was in the movie theater and they were playing a war movie. So, while the ships were being destroyed in Port Chicago, the movie goers thought what they heard and felt were sound effects from the film. It wasn’t until he was halfway home before realized that something was amiss.

“You know those newspaper pictures of the theater with the roof all collapsed? Well, the theater didn’t actually collapse until several days later.” Everyone had gotten out of the building safely that night. “The press sure liked that picture!” Uncle Bill grinned.

I asked my cousin Susan if her father ever told her about the Port Chicago Disaster. Uncle Jimmy, the youngest of the Dalton gang, had just come home from a camping trip with his buddies. He had just stepped out of the shower. It sounds like the beginning of a terrific tale. I wish Susan had thought to ask her father more about it years ago because that’s all Susan remembered him telling her. And now we’ll never know more.

Seventy years ago, a pilot flying in the blast zone reported a massive ball of smoke and fire stretching two miles over the area of Port Chicago. The shock was felt as far away as Boulder City, Nevada and the seismographs at UC Berkeley determined the blast to be equivalent to an earthquake measuring 3.4 on the Richter scale.

At the time of the blast, Port Chicago contained three hotels, a movie theater, a thriving shopping district and about 660 homes. Most residents, like my grandparents, stayed and rebuilt. My grandparents lived there until they retired to Colfax in the 1950s.

In the late 1960s the United States government bought the town of Port Chicago with the last home owner leaving town in 1969. With the Vietnam war ramping up, there was fear for the safety of the townspeople. The Navy didn’t want a repeat of 1944. The town was quickly demolished and turned into the Concord Naval Weapons Facility.

In 1992 Congress passed a bill to create the Port Chicago Memorial that honors the servicemen who lost their lives that night. My husband and I took the National Park tour a few years ago. It was a very sobering experience and I’d recommend that you take the opportunity to see it yourself. From the visitor center we were bussed out to the waterfront memorial. While others were looking out over the river, I looked back towards the flatlands where the town used to be. I wondered if my grandmother’s roses were still there.

One Reply to “At Home With Vivian: Remembering Port Chicago”