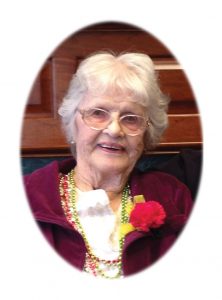 Colleen (Connie) Evelyn Freschi passed away peacefully on Friday, February 22, 2019 at the age of 94, surrounded by her family. Connie was born to Lester Clark and Fern Clark (Hills) on October 10, 1924 in Flint, Michigan. She spent her entire childhood and attended high school in Flint before moving to Martinez, Calif. in 1944.

In 1950, Connie married the love of her life, George Freschi. They were married for 57 years and had three children – Michael, Clark and Gina. Connie was a very devoted wife and mother. She enjoyed traveling with her family, entertaining friends and attending sporting events at Alhambra High School. Connie had many friends and was known for her quick wit and wonderful sense of humor. While she had many hobbies, in her later years, she became very interested in genealogy and would spend hours tracing family history.

The last 12 years of her life were spent in the mountains, where she was able to spend time with many of her grandchildren, who she adored. The family wishes to thank the staff at EPHC Long Term Care Facility for the loving care they gave Connie in her last few years.

She is survived by her sons Michael (Kathy) of Calpine, Calif. and Clark (Sharon) of Roseville, Calif. and grandchildren Zack, Sara, Lisa, Bryan and Sherry, as well as 13 great-grandchildren.

Funeral Services will be held on Friday, March 1, at 11 a.m. at Connolly & Taylor in Martinez, Calif. Interment to follow at Queen of Heaven Cemetery.