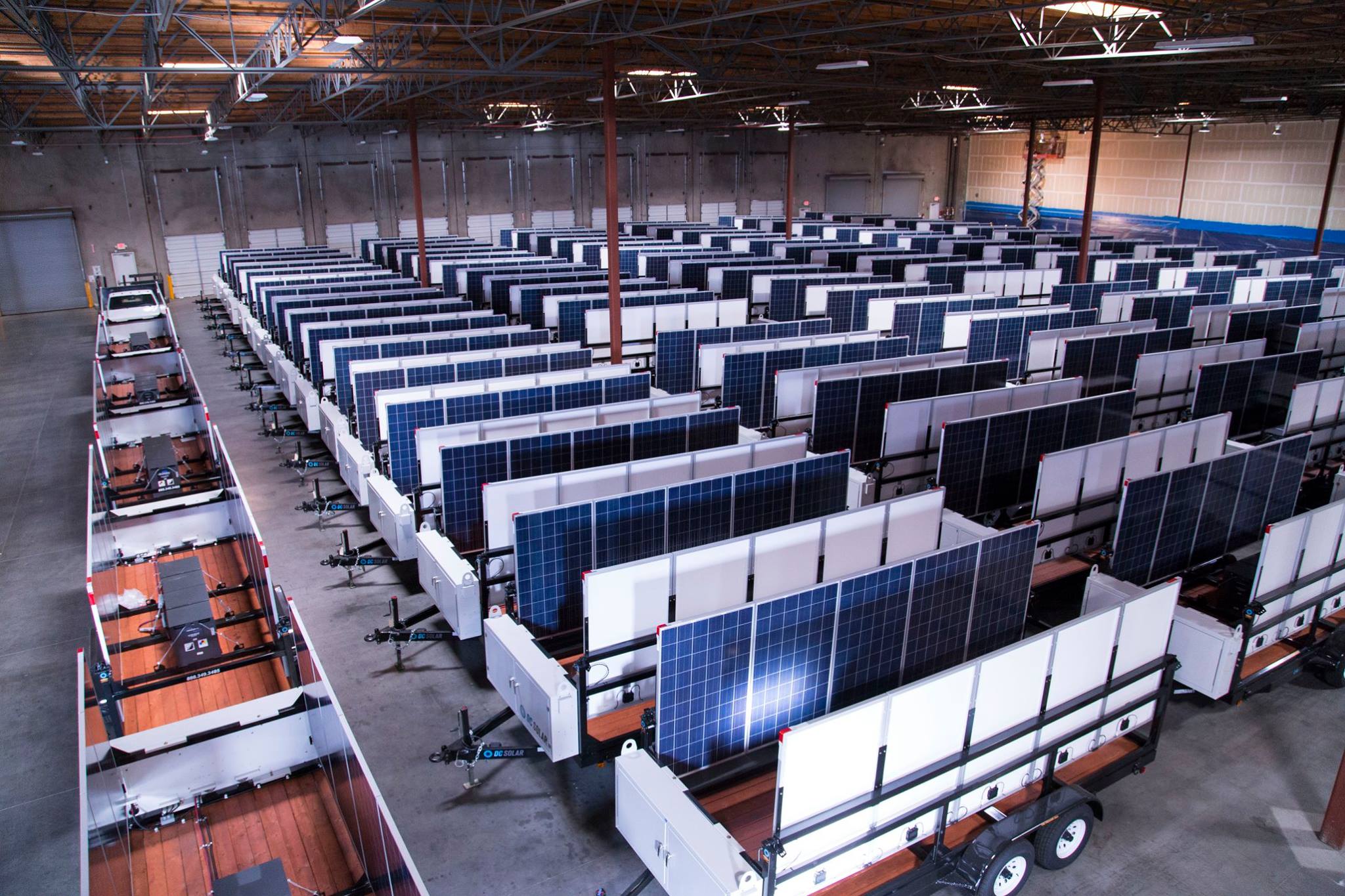 A Federal Bureau of Investigation agent’s testimony in court papers has called the way DC Solar was run “is evidence of a Ponzi type investment fraud scheme.”

Agent Christopher Phillips’s declaration was one of multiple documents recently filed in connection with the Chapter 11 bankruptcy and reorganization filing by agents for Martinez residents Jeff and Paulette Carpoff.

The Carpoffs have sought to restructure their business interests after their Martinez home and their company’s Benicia headquarters were subjects of an FBI raid last December.

Phillips’s declaration did not mention the Carpoffs by name, and described the businesses only as Company S and Company D, but said the companies operated as one company and were run jointly by a husband and wife and are headquartered at 4901 Park Road, Benicia, the home address of DC Solar Solutions and DC Solar Distribution.

The agent also described the company as one that builds mobile solar generators (MSGs),) combining solar panels which were placed along with other features on wheeled trailers.

Phillips wrote that the husband sought investors, assuring them of tax credits of up to 30 percent of the total investment and the ability to deduct depreciation of the generators during a five-year period.

To enhance the tax benefits further, the company sold its MSGs to limited liability companies created specifically for such transactions, with the investment funds managed by a company called SM and SMS Inc. with ties to the Benicia-based company.

He said investors purchased MSGs from “Company S” for $150,000, paying 30 percent of the cost in cash and the rest of the cost financed by Company S, to be paid back through leasing the MSGs to third parties. The $45,000 cash payment represented the maximum amount of tax credit the invested were able to claim per unit, he wrote.

As part of the deals, he wrote, investors deposited the funds by wire transfer into bank accounts created the investment funds, and the two owners and their adult children were signatories for many of the bank accounts.

Collectively, investors deposited by interstate wire transfer about $675,649,000 into the company’s bank accounts set up for the funds. But the total of investor money through transactions as well as money from financial institutions provided to the company was $810,738,000.

The solar generator units were marketed as a good investment because investors could receive substantial tax benefits, including the 30 percent of the $150,000 transaction per generator as tax credit for alternative energy, and by deducting depreciation for five years.

In addition, there were promises of a small revenue stream through leases with third parties. Investments were owned 99 percent by investors with 1 percent owned by the fund manager affiliated with the company.

After five years, ownership structure flipped, with the manager owning 95 percent of the fund and investors owning 5 percent. But investors could sell their ownership, which they found appealing because after five years, they wouldn’t get further tax benefits.

Banks and other entities were told that one telecommunication company had leases for hundreds of the solar generator units.

But Phillips said that evidence developed in the investigation showed that more than 90 percent of the money Company D claimed as lease revenue and which it used to pay investment funds was the result of transferred from its sister Company S.

He wrote that the absence of actual third-party leases was concealed to create the appearance that the solar generators are producing lease revenue – but they were not doing so.

Phillips, an agent since 1998 and assigned to the Bureau’s Sacramento office, said the company represented that no fewer than 12,000 MSGs were manufactured as of March 2018. But he said it appeared that as few as 3,000 to 5,000 solar generators had been assembled by February 2018.

He wrote that the owner claimed the telecommunication company was leasing hundreds of the generators. Instead, Phillips said, “the vast majority” of the units made and sold to investors were stored in lots throughout California and were not being used. The telecommunications company was paying $500,000 in leases each year.

In addition, Phillips wrote that a review showed at least 57 bank accounts into which criminally-derived funds had been deposited.

Phillips wrote that the operation appears to have been involved in wire fraud, conspiracy to commit tax fraud, investment and tax fraud.

Company documents suggested Jan. 31 there were 8,681 solar generator units and 7,562 of them were connected to tax equity investment funds and 7,030 were earning monthly leases and another 8,000 were “in the pipeline.”

Long-term leases were described as being with a telecommunications company, raceways and speedways, automobile companies and energy companies. Short-term leases were to universities, investment companies, utilities, a soccer club, fairgrounds, wineries, airport authorities, a robotics company and a chamber of commerce.

Former employees and some bank officials began worrying about the company. One bank ‘s officers toured the company’s Benicia plant and noticed that little manufacturing was going on. One bank ended its relationship with the company and its owners.

Bank officials also learned that the owners hadn’t filed tax returns and would not approve a real estate purchase and a requested loan as a result.

Questions also arose about the $150,000 valuation of the generator units, since information given to an appraiser had been supplied by the company. But Phillips’s testimony noted that if the units were appraised for lower, the investor deals would not appear as attractive.

Phillips said one employee asked another for a summary of leases, and then noticed numbers didn’t add up. The one employee found that rather than documents showing $90 million in lease revenues for 2017 as the company had represented, he could find documents showing less than $2 million in lease revenue. The $90 million claimed instead were transfers from Company S, rather than revenue.

Another employee kept books on properties listed in other documents as owned by the Carpoffs.

That employee learned that Company D had claimed $55 million and more in lease revenue in 2016, but the employee found that at least $50 million came from transfers from Company s and could not be classified as revenue.

In 2017, the company nearly ran out of money because it had not received investor money in a while, Phillips’s testimony said.

It sought to find 10 random units that were part of the deal, and when those couldn’t be found, the bank made a more intensive look, finding fewer than half and many of those were in storage at Las Vegas, Nev., Motor Speedway and others at the Benicia headquarters.

Others were found in Visalia without solar panels attached.

During a separate search for the solar generator units, one person found that GPS devices designed to show a unit’s location instead had been buried so it would suggest a unit was on site and working.

Another employee reported there never had been any large-scale agreement with the telecommunications company. It was the largest customer, but generated only $500,000 in revenues annually.

Trailers deployed to special sporting and entertainment events generated only a few hundred dollars for the short duration they were used.

An employee said he realized revenue generated by leases could not sustain the company, especially with the money the owners were spending.

The company owners bought nearly 100 cars, from vintage models to modern luxury cars, two boats and a motor home and had them stored in a warehouse in Benicia. Phillips’s report called the money used for the purchases as “criminally derived.”

They also bought dozens of properties, some of which were rental properties. Some of the real estate firms mentioned in Phillips’s report were named Dog Blue, Dora Dog, Brandy Boys and Fou Dog, all of which are tied to the Carpoffs.

They also used company money on private jet service, $19 mullion according to the declaration. Although no monetary amount was mentioned, the affidavit said transfers also were made to the Martinez Clippers professional baseball club account.

Phillips wrote that “there is probable cause to believe” that investor funds paid to the company are a result of an investment and tax fraud scheme and the company owners have committed wire fraud in connection with the scheme.

In other developments in the case, the United States Department of Justice assistant United States Trustee Timothy Laffredi and others have objected to GlassRatnor Advisory and Capital Group and its restructuring officer Seth Freeman, saying they had ties to DC Solar or its owners are not “disinterested” parties, that an employee was “the victim of fraudulent inducement” and had reported discovery of a “fraudulent financial scheme.”

The document also questioned whether the Carpoffs had stepped back from the operations of their company, questioned if their proposed reconstruction would be transparent in providing information and that sufficient safeguards are not yet in place.

Another court document in the bankruptcy case filed for representatives of the Securities and Exchange Commission named the Carpoffs in saying they had engaged in a Ponzi scheme. The Commission said it is investigating the Carpoffs and other debtors for securities fraud.

Given their legal troubles, that paper said, “a Carpoff-led bankruptcy would be a non-starter.” It said there was no evidence that DC Solar Solutions has any legitimate business model to reorganize, and noted the debtors have neither cash nor other assets with which to organize, and have no liquid assets or realistic source of funding.

In addition, Green Energy of Charlotte, N.C., has sought return of several thousand batteries it said Jeff Carpoff had ordered and had shipped to DC Solar’s headquarters in Benicia, to Xtreme Manufacturing in Henderson, Nev. And to US Tower in Woodlake.

In its own filing in the bankruptcy court, Green Energy contends Carpoff never intended to make a payment on the batteries.

Of those batteries, 923 are in storage and the rest have been incorporated into MSGs. The batteries in storage are perishable, according to the document, and if they aren’t charged and discharged, they would harden and become worthless.