MARTINEZ, Calif. – At the end of a well-attended, Oct. 23 public study session, the City council directed staff to investigate the feasibility of annexing four areas contagious to city boundaries. Those areas are Mountain View, Vine Hill, North Pacheco, and a portion of Alhambra Valley.

Reportedly a previous effort to annex North Pacheco failed. There were 70 votes in that election the votes in favor of annexation failed to meet the 50 percent plus one minimum. Some claimed that tenants voted in an election that is only for property owners. During public comment, several people complained that the city had not informed them of meetings and failed to communicate well enough on annexation plans.

Councilman Mark Ross reminded the audience that the study session was just that. He saw it as a chance for the council to stay within the requirement of the Brown Act, discuss the pros and cons of annexation, and give orders to staff to collect the kinds of information needed to decide whether to try to annex any, some, or all of the areas mentioned.

Councilwoman Lara DeLaney said as long as the feasibility study that was done for the failed North Pacheco effort can be updated, the City might find efficiency and cost savings by doing a study on all of the areas at once. If they find feasibility doubtful in any area, they could drop that effort and concentrate on feasible areas.

DeLaney agreed with Councilmembers Noralea Gipner and Debbie McKillop that the city should make a more robust effort to keep the public informed this time, and perhaps take an online survey early in the process. All of the council members said they want to give the public objective, accurate information about the costs and benefits of annexation.

“We should be as bold as possible. This is the greatest opportunity for growth, and there could be some cost savings,” DeLaney said. “Pacheco Blvd. is the entryway to the city. It needs improvement.”

For example, Mayor Rob Schroder said there would be city taxes, such as Measure H (funds park improvements) but residents of the unincorporated areas that annex, would lose a county policing tax. He said the after-annex zoning is required to be exactly the same as the county zoning for at least two years.

Schroder has held a seat on the Local Agency Formation Commission (LAFCO), which has the authority to approve city boundary adjustments and annexations.

He said there are areas outside the city where the City of Martinez provides water services, and LAFCO frowns on that. The agency was formed to counter what occurred in the Los Angeles area when it grew at a rapid, uncontrolled rate that is described as urban sprawl, according to Schroder.

After the meeting Ratcliffe, Martinez explained the city’s position this way, “For many years, the City has processed applications for out of agency water service in these areas in anticipation of future annexation.” It is a city goal to annex those areas by 2010, she said.

The city required the property owners to sign deferred annexation agreements, so those areas, so those water customers will automatically count in favor of annexation. The Mountain View neighborhood is the only exception since it preceded LAFCO.

A Pacheco Blvd. resident said he is satisfied with the Contra Costa County Sheriff’s service in his neighborhood and he does not want to change it, but McKillop said sometimes there is confusion over who should answer a call in her neighborhood, which she said is near the city boundary.

There were similar remarks from past resident complaints about speeding at the portion of Pacheco Blvd. near Bush Street where Martinez and County Sheriff’s jurisdictions meet. 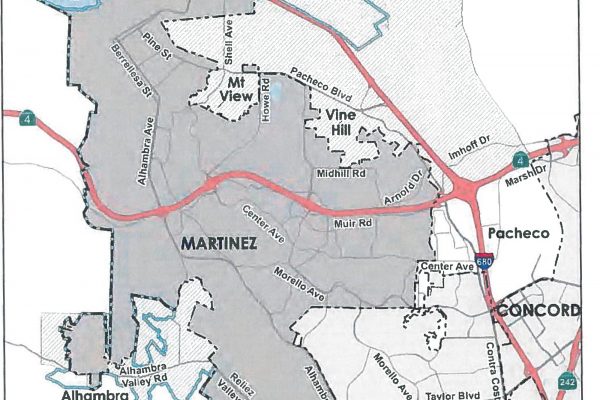