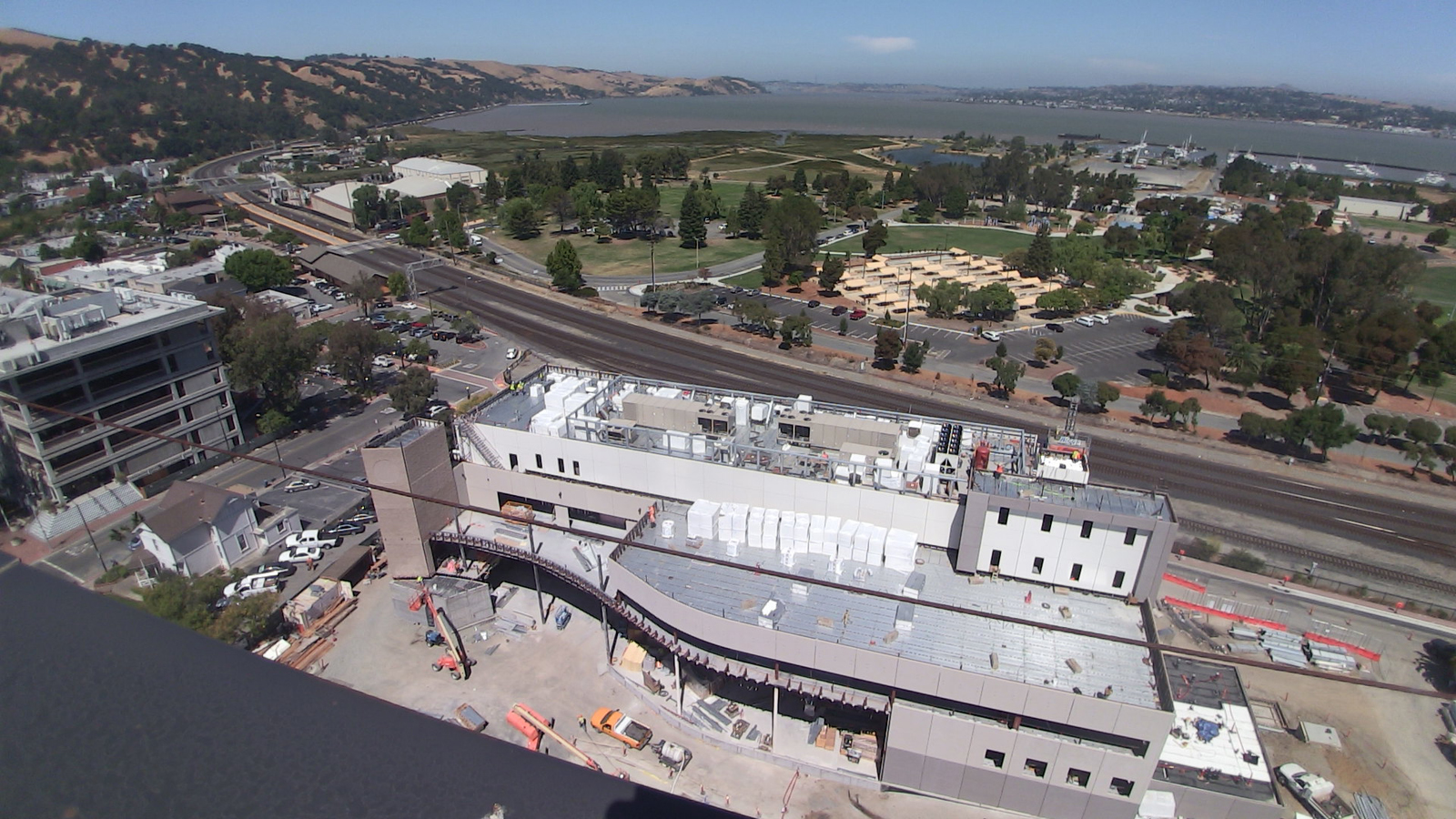 MARTINEZ, Calif. – Contra Costa County (CCC) has two active building projects in Martinez, and one of them will have a profound effect on the appearance and convenience of downtown. More than 100 people are working on the two Hensel Phelps Construction projects to get them completed on time.

The CCC Public Safety and Emergency Operations Center at 50 Glacier Drive will be completed first, perhaps by March 2020, according got Eric Angstadt, chief assistant county administrator.

Although this building will not be as prominent in town, it may be the most important. About one-half the size on the new County Administration building, its 38,000 square feet are designed to accommodate the Sheriff’s administration, fiscal and personnel, and coordination of emergency services.

In case of an emergency, it can function without city utilities. Its proximity to the CCC Forensic Lab across the street, and to Highway 4 and I-680 is also a benefit to coordinated emergency services.

As they are finished, these two projects will involve re-locating between 180 and 200 County employees, office records, furniture, and technical equipment.

The 72,000 square-foot County Administration building at 1025 Escobar Street will replace the aging 12-story building at 651 Pine Street in May or June of 2020. Most of the wall panels are in place and the roof will be installed this month, according to the CCC website.

Angstadt said the work may be finished by April or early May, but it will take time to move everyone and be ready for business.

There is a wonderful view of Carquinez Strait, the Benicia/Martinez Bridge and Suisun Bay from the top of the new building, but employees and visitors will have to catch that view from outdoor patios on the second and third floors and an employee break-room on the fourth floor of the 4-story building.

“The (CCC) Board of Supervisors told us to make the building as energy efficient as possible, and that is what we did,” Angstadt remarked. With solar arrays on the roof of the new building and new, nearby parking lot, the building is expected to be self-sustaining, in terms of energy.

Instead of open space on the roof, part of the design is a plaza on the ground floor, intended to create a pleasant outdoor place for employees and for the public in general when they are doing business.

Angstadt said, “When we bring down 651 Pine, we will create some more open space there.”

The new County Administration building is part of the County’s larger plan to dispose of underutilized properties, including the “Old Jail” across the street from 651 Pine Street, and a number of others. The City of Martinez is in negotiations with CCC to acquire the Old Jail property, according to Angstadt.

Mayor Rob Schroder confirmed that, saying, “We have been talking to them for over a year. They have given us some time.” The city wants to preserve the original building because of its character and historic value, but Schroder said, “It is unlikely that the city will retain the building. We would buy it and sell it to someone else, a developer who could them lease it. The sale would likely have the condition of preserving the appearance of the stone portion.”

The County had planned to demolish the historic, hand-chiseled granite jail built in 1903, the same time as what was then the Court House (recently renovated, “Finance Building”).

A Draft Environmental Impact Report revealed that it would have a “significant and unavoidable” impact on downtown Martinez. The town has been the County seat since 1850 and the jail is inextricably linked to Sheriff R.R. Veale’s legacy in the county, and both buildings are listed on the National Register of Historic Places.