What do you do when you get the chance to own a 1901 Pullman rail car and make it a showcase in your city?

The Martinez Historical Society decided to turn to crowdfunding, said President John Curtis. And the goal is to raise $10,000 – maybe more – to get the rail car moved here from Walnut Creek. 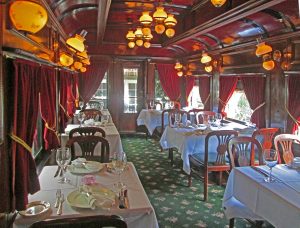 The rail car currently is at Vic Stewart’s Famous for Steaks, a noted restaurant at 850 S. Broadway, Walnut Creek, that was built at the Walnut Creek Railroad Station that was erected in 1891.

But John Herrington, grandson of Vic Stewart and owner of the rail car, has decided to close the restaurant. The additions made to the original portions of the railroad station will be removed and the rest of the land will be used for commercial retail purposes, Curtis said.

The original depot will be kept as a historic site. But the rail car has to go, to make way for the new development.

And Bill Wood, an Alhambra Valley area architect with Herrington as a client, had an idea for the rail car’s new home – downtown Martinez, near the city-owned old Southern Pacific depot, which the historical society is lobbying to use for historic exhibits.

Herrington liked the idea and gave the vintage car to the historical society before the end of 2017. But that means the Martinez organization has to pick up the tab for the move.

Curtis has been talking to house mover Phil Joy of Benicia, whose company has moved ships as well as buildings, about getting the 90-ton car from Walnut Creek to Martinez, a 12-mile trip. He’s looking at other bidders, too.

But since the move has to happen this month, Curtis and the historical society is wasting no time in raising money.

While contributions are being accepted directly at the Martinez Historical Society, the organization turned to GoFundMe to set up an online donations page. The dollars are coming in with nearly 15 percent of the goal reached in a few days.

Fundraising is the historical society’s primary concern at the moment, because of the need to act quickly. A temporary and secure storage site has been chosen to house the vintage car until its permanent home is determined, Curtis said.

The 82-foot long car has been part of a destination site in Walnut Creek for more than 40 year. And it currently sits next to a piece of Contra Costa County rail history that goes back nearly 130 years.

The Walnut Creek branch line passenger and freight depot was built in 1891 at Mount Diablo and Broadway to provide a loading dock, a freight room and a passenger office to the local rail service.

San Ramon area farmers used trains to move their crops to markets, and a train from Oakland made a daily round trip through Contra Costa and Alameda counties.

Passengers used to ride from Walnut Creek to San Francisco. Those going the other way would be greeted by a surrey from Rogers Hotel.

The old Walnut Creek depot was supposed to have been demolished in 1971, but Herrington led the movement to move the station to the new Broadway address instead.

The rail car is a decade younger than the depot, Curtis said, and it has no direct ties to California, although it became part of California history on its way to Walnut Creek.

It was built by Barney and Smith of Ohio for the Minneapolis-St. Paul and Sault Sainte-Marie Railroad, a subsidiary of the Canadian Pacific Railway, according to information Curtis provided.

Equipped with an outdoor platform, the car often ran at the end of passenger trains traveling throughout the Midwest once it became privately-owned. Its name and numbers were changed periodically.

In 1973, Herrington privately bought the car, which at the time had been running on the New Hope and Ivyland Railroad, a Pennsylvania tourist line.

He had the car brought west in early spring of that year, but the trip was no easy journey.

First, the rail car had to have extensive work before leaving Pennsylvania. Then it broke down near Davis and barely made it to a Roseville yard for repairs.

It was still in Roseville April 28, 1973, a half-mile from where bombs on a freight train began exploding that morning. 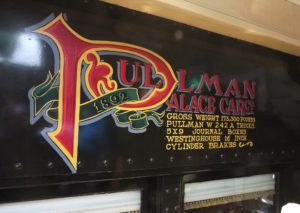 The Southern Pacific train was hauling nearly 7,000 unfused Mark 81 bombs, each weighing 250 pounds, in 21 Department of Defense freight cars. The explosions went on for five hours, injuring 52 people, closing Interstate-80 and heavily damaging the nearby city of Antelope as well as a major subdivision and an elementary school, which was closed that day. Fires set by the bombs weren’t put out till the next day.

The rail car initially was protected by a building that shielded it from the explosions. But as the day went on, the building fell. When the rail car pulled out of the yard in May, it was full of shrapnel holes and shattered glass.

Once the damaged car arrived in Walnut Creek, Herrington had it welded to lengths of rails that were bolted to cement slabs. Then he got to work, making repairs and restoring the car’s beauty so it could be opened as the Walnut Creek Railroad Station Dining Car and Saloon.

While much of the car is original, including elegant woodwork, Curtis said the car’s galley was converted into another dining area and detailed to match the rest of the interior, which features velvet curtains, gold tiebacks, green upholstery and nickel plating.

Where exactly the car will go has not been decided, Curtis said. One option is on a city-owned parking lot next to the depot. Another is on Union Pacific right of way. The car will be stored until its next location is decided.

Curtis has been speaking with UP representatives in Omaha, Neb., and those at the UP Railroad Museum in Council Bluffs, Iowa, about how other rail car setups have been handled, “to see if we can replicate that here.”

Moving a rail car isn’t as easy as hooking up a trailer. First off, the car hasn’t moved since 1973, when it was brought out from Pennsylvania. And it’s welded to its rails that are sunk in concrete.

Plus, requirements for rail cars keep tightening, and the car’s wheels don’t meet those mandates, Curtis said. And with each complexity of the move, costs rise.

“It takes a long time to raise money with bake sales,” Curtis joked.

Paul Kraintz, a member of the historical society’s board who is familiar with fundraising through his work with Meals on Wheels, recommended looking at crowdfunding websites.

The historical society also has spoken with Al Di Paolo, chief mechanical officer of the California State Railroad Museum in Sacramento, about the project, since that museum moves vintage cars on its own short haul line.

Ultimately, the society chose to go with GoFundMe, a new experience for the organization.

“We’re going to try it and see what happens,” Curtis said.