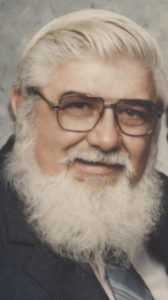 John Joseph Dutra was born in Franklin Canyon, at the end of Dutra Road, to Margaret and John Dutra, December 19, 1934. He moved to Pacheco, Calif., when he was six. After graduating from Mount Diablo High School, he soon wed Anneka Jan Walton.

John had a number of professions over the years. He proudly served in the National Guard, helped his family on the ranch, worked at Shell Oil and became an owner/operator truck driver. He was the hardest working man anyone ever knew.

After retirement, John moved to Burney, Calif., with his long time partner Jean Macey, roaming the mountains on his ATV, fishing, relaxing at the diner and finding luck at the local casino. He loved having his family up to visit and teaching his grandkids to fish.

John loved telling a story, a joke, some good country music and having his family around him.

Everybody loved our dad. He was everyone’s dad, grandpa or friend. He will be greatly missed by all who had the pleasure to know him.