MARTINEZ, Calif. ­­– Fresh from its stroll down Main Street during Martinez’s Fourth of July parade, Joe DiMaggio’s former boat, the Joltin’ Joe, is traveling to Tahoe Aug. 9 to enter the Lake Tahoe Concourse, accompanied by several city officials as well as members of the Local 152 Carpenters who worked on restoring the watercraft.

Public Works Director David Scola and Superintendent Bob Cellini will make the trip with the boat, the fifth year the Joltin’ Joe “has seen the pristine blue waters of Lake Tahoe,” Cellini said. The city is the official agency that has entered the boat in the contest.

The watercraft has developed a following, in part because of its design and in part because New York Yankees fans gave the boat to their legendary player and Martinez native, Joe DiMaggio, whose nicknames were “The Yankee Clipper” for his defense in the outfield, and “Joltin’ Joe” for his offense record 56-game hitting streak that still stands.

In 2013, when the boat made its debut in that area, at the South Lake Tahoe Boat Show, it was still under construction. Still, wooden boat enthusiasts wanted to see its progress, especially since it is an iconic piece of sports history, Cellini said.

“The boat was displayed proudly, and it even landed a full page article in the show catalog, even though it was not actually in the water,” he said.

Once the restoration was complete, in 2015, the Joltin Joe returned to South Lake Tahoe after it was accepted into the eighth annual Wooden Boat Classic at Tahoe Keys Marina.

“After several weeks of around-the-clock trashing, the boat was finally in the water,” he said. And when the Joltin Joe returned to Martinez, it had earned the “most improved boat” award.

In August 2015, the vessel was accepted to enter the 2015 Concours d’Elegnce at Obexters, the oldest marina and boat sales site on the lake.

“This time, we walked away with two trophies, best nonprofessional restoration and second in class,” Cellini said.

The next year, the Joltin’ Joe was entered into the Red, White and Blue 41st annual Antique and Classic Boat Society Show in Carnelian Bay Concours, and again placed second in class, he said.

Joltin Joe’s trophies are being kept at Martinez City Hall, Cellini said. “Dave Scola is guarding them until a final home is found for the boat,” he said. 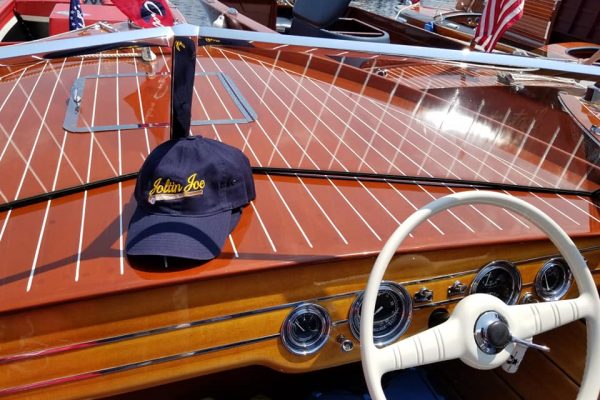