A change in China’s practices in purchasing recyclable commodities is having impacts on area recyclers, including the company that contracts with Martinez for garbage and recycling, Republic Services, also known as Allied Waste.

Marie Knutson, Republic’s recycling coordinator, said the company is large enough to seek out other markets besides China.

“But those other markets are not tolerating contamination, either.

“This has changed what we used to tell the public, that 10 percent contamination was accepted.” That went down to 3 percent, and now has shrunk to 0.5 percent, “which is very small,” she said.

During one of her recent visits to the company’s recycling plant, she said she saw other disappointing practices by customers.

What can be sold to China changed in July 2017. That country, which has been purchasing about 62 percent of California’s recyclables, announced a new policy called “National Sword” that changes the acceptable percentages of contamination in recyclable products, said a statement by CalRecycle. The stricter policy became effective in March.

In addition, China’s new 25 percent tariff on accepted items becomes effective this month, and that will increase the cost to recycle.

“This policy change is already starting to have adverse impacts on California, and is resulting in more material being stockpiled at solid waste facilities and recycling centers or disposed of in landfills,” the CalRecycle statement said.

For instance, Marin Sanitary Service has reported it is running out of room as it stockpiles bales of recyclable materials in hopes of selling the products in the future.

“In addition, changes in China’s policies may have significant impacts on California’s economy,” CalRecycle’s statement said, noting that recycling may no longer be a profit-generator.

“Recyclable materials exported from California had a total vessel value of $5.2 billion in 2017,” the statement said. That could change to a loss in the future.

Plus, China’s policy and the challenge to find other markets for recycled materials is affecting California’s broader environmental goals, the statement said.

China calls its enforcement campaign “Blue Sky 2018,” and it is designed to prevent importing specific materials, including certain post-industrial scrap plastics, slag, residue from smelted steel and iron, other metal and electrical appliance scrap and compressed scrap from cars.

Republic has starting issuing its own advisories to customers.

“For decades, China has been the largest importer of the world’s recycled commodity, and the U.S. was 40 percent of the inbound stream,” one of its notices says. “In 2017, China announced efforts to clean up their country, which included dramatic changes for acceptance criteria of imported recyclables.

Fortunately, in Martinez, Republic offers a way to divert food-contaminated papers from landfill disposal through its green waste and compost collections. That keep clean papers and cardboard available for more particular markets.

In addition, Martinez Unified School District school children are being taught about proper recycling through New Leaf Collaborative “Green Teams” that teach students whether discarded items are compost, recyclables or trash that will end up in the landfill.

“Most of the Martinez schools are already composting in the lunch areas,” Knutson said.

Republic is asking adult customers to “sort smarter,” saying certain items should not be put in the recycling bin.

The company explained the difference in “biodegradable,” which can decompose with the help of bacteria or other organisms, and “compostable,” which can break down into decaying organic matter without toxicity that can be used safely to fertilize soil.

Some tableware items are described as “Earth friendly,” such as corn, potato and sugar cane polylactic acid products, but Republic’s notice said these products often are made primarily of petroleum-based plastic. The hybrid substance can’t be accepted for plastic recycling, and it’s also difficult to compost, the notice said.

They can be accepted only in a controlled industrial composting place, so not all composters can handle those products.

Single-use utensils can’t be recycled, and unless they are made of bamboo, they can’t be composted, the notice said. “The best bet is to use real silverware and dishware whenever possible,” the notice said. “’Eco’ or ‘Earth Friendly’ hybrid plastics go into the trash.”

Those with questions may email Knutson at mknutson@republicservices.com. Those interested in reading CalRecycle’s notice may do so online at https://www.calrecycle.ca.gov/markets/nationalsword.

BestClimate action report given to Council 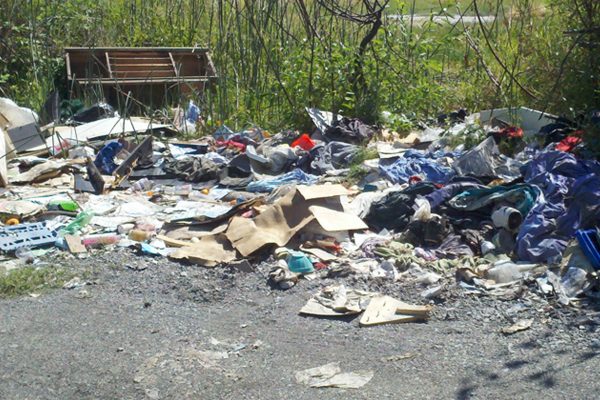 County cracking down on illegal dumping