MARTINEZ, Calif. – For years, Frida Kahlo’s paintings were overshadowed by those of her husband, Diego Rivera, until actor Edward G. Robinson began purchasing her works and French Surrealist Andre Breton arranged some prestigious exhibitions for the Mexican artist.

Lee Krasner often found her own lifelong art career was linked to and sometimes overshadowed by that of her spouse, Jackson Pollock, even when she was the one who introduced Pollock to important collectors and critics.

Such experiences is behind SWAN Day, the international event with an acronym that stands for Support Women Artists Now.

Martinez Arts Association (MAA) has been part of SWAN Day since its founding 11 years ago, and the local arts organization will celebrate the event March 24 with an exhibit and sale in the former Southern Pacific Railroad Depot.

This year, the event is bigger and better than ever, said MAA President Vernon R. Sanders. More than 80 artists and craftspeople will have booths both inside the depot and out in the adjacent parking lot.

Most of the exhibitors will be women, and most of them will be from the San Francisco Bay area, Sanders said, although in the past, some participants have come from Sacramento and beyond.

“Historically, women artists have been underrepresented,” he said.

Kahlo and Krasner had difficulty in being appreciated for their own talents when they have been married to artists. Other women have faced other challenges to make names for themselves in the art world.

For instance, Helen Frankenthaler occasionally is remembered in articles on abstract expressionism, but other women artists are nearly forgotten. They were unable to gain membership in male-only art clubs, or they resorted to painting under male names or refused to sign their paintings at all.

SWAN Day is a chance not only to acknowledge women artists but to meet them in person and buy their works.

“We’ll have everything,” Sanders said – painters, photographers, jewelry makers and those who specialize in handmade crafts, from candles to body care products.

Men will be represented, too, he said. “We don’t discriminate.”

The only requirement to enter the MAA SWAN Day show is that artists personally make their submissions, Sanders explained. For instance, while artists can sell prints, those prints must be made of their own work, he said.

SWAN Day started as a collaboration between WomenArts and Women in the Audiences Supporting Women Artists Now (WITASWAN) in Chicago, started by the Illinois chapter of the American Association of University Women, to encourage women as consumers to support women artists.

The Martinez Arts Association SWAN Day event will be from 10 a.m. to 4 p.m. Saturday, March 24, at the Southern Pacific Railroad Depot on Ferry Street and Marina Vista Avenue. 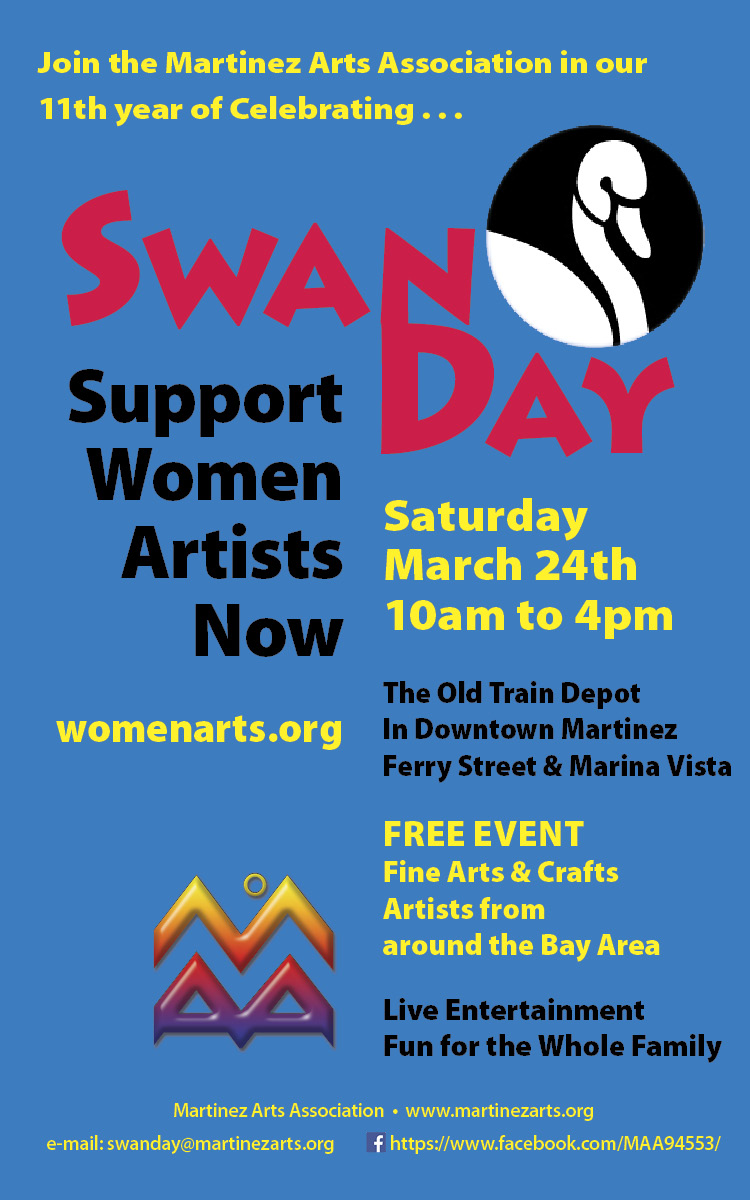