One of the most clever and engaging of new theatrical concepts just came to my attention this past week as the Orinda Starlight Village Players adapted a relatively new social media product, called Zoom, to provide you with a theatrical venue right in your own home, via your own computer (preferably and more effectively, one with a connected video camera). Communication programs such as Zoom, Skype-Meet-Now, GoToMeetings, Adobe Connect and TeamViewer, were all  created in the past 7 years and are designed for allowing off-site connectivity for families, office workers, community management entities, etc., to gather, communicate and collaborate (and now at safe distances) for teleconferencing, telecommuting, distance education, and maintaining social relations.

I first joined family members around the country a couple of months ago in a family Zoom meeting where we could all see and speak with each other in celebrating a family event, just as if we were all gathered in the same house.

Now you can participate in and thoroughly enjoy this new theatrical experience basically for FREE, (donations are encouraged of course), with a delightful new fun-filled mystery guessing game based on mystery comedy theater. Murder and mystery will capture your imagination and mindset when you participate through Zoom to become an active audience guest participant in their new theatrical creation, “A Night of Creeps; Haunts and Murder”. 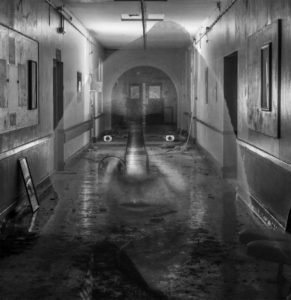 The Orinda Starlight Village Players web-site (www.orsvp.org) is where you will connect and request a “Zoom Meeting Link” for the night you wish to attend and participate in the show. The theater will send you a reply with instructions, telling you the time you need to connect to the internet link they give you to enter the Orinda Starlight Village Players Interactive Zoom Playhouse. Once you complete the sign-on procedure, you will appear on your computer screen as if you are in your own private little room, along with others who wish to participate in the show. At this point the show begins!

A mysterious ghostly character, Mr. Grim, will appear on the screen in a large room of a mansion, tersely welcoming  you to the manor and explaining that while you and the group of  eight citizen guests (the actors  whom you now see on your computer screen) were originally invited to the mansion this evening to discuss reports and rumors in their community of Amity Hill, concerning alien intrusions, evil ghosts, and other paranormal activities, a terrible and unexpected event just occurred. Shockingly, the mansion’s owner, Mr. Mugwort, who offered his home to facilitate this community discussion, has just been found murdered in the mansion and apparently his murder occurred during the arrival of the town’s guests. Mr. Grim believes that the murder had to have been committed by one of the newly arrived community guests, many of whom had animosity towards Mr. Mugwort, and may have wished him dead.

You are warned by Mr. Grim that you and the other participants of this murder mystery show, along with the town’s people are now all locked up in separate rooms of the mansion until one or more of you figure out who murdered Mr. Mugwort. The wrath of the manor is great and if the murder is not solved, the consequences will be terrible!

As a final note, when you receive your instructions as to how you may attend the meeting in the mansion, you will be supplied with personal background information on each of the town’s guests to give you clues to help you solve the mystery. You will also be given a detailed map of the mansion interior. This is important information you must have with you to assist in solving the mystery and ferreting out each actor’s motives and secrets. You must print these details out on your home printer and have them in your possession as the show unfurls its mysteries. You should make notes and form your own conclusion as to the murderer’s identity! Further, as the show progresses, each suspect from the town’s representatives will at times speak candidly, sharing information as to their past personal relationships with Mr. Mugwort, in addition to alleging where they were in the manor at the time of his death. Keep in mind that they may not always be telling the truth., but you, as a member of the virtual crime-solving audience are encouraged to ask them to reveal any secrets they possess that may have a bearing on this murder or any other questions you may wish to ask.

My wife and I participated in this delightful game mystery last week and thoroughly enjoyed it! It will continue every Tuesday and Thursday evening at 7 pm, now through August, so connect with the Orinda Starlight Village Players website and start this fun, thought provoking, and entertaining game. For reservations contact: info@orsvp.org