By CHARLENE PERRY
Reprinted from January 1985

Editor’s Note: Due to the pressures of time, energy and upcoming knee surgery, this writer will return from time to time to reaching into the treasure chest of Charlene Perry’s well-researched columns from the 1980s and 90s. This piece, from 1985, will be the introduction to a forthcoming article about how the Don Ignacio Martinez Plaza in front of City Hall came to be. That 42-years-ago event is a great “the community working together” story. To set the stage for it, Charlene Perry told the story of how Martinez became incorporated in 1876 and described how first City Councils (named in those days the Board of Trustees) conducted business.

“We have again begun working on our history book project (Editor’s Note: The Society’s 1986 Martinez: A California Town, one of the first if not the first professionally designed and published local history books in Contra Costa County) after a hiatus of a couple of years. In researching Martinez, we went back to the old histories of the county and found that our city only received a couple of paragraphs in each, with later editions copying the preceding one.

“Believing there must be more information, we went to City Hall where we were allowed to go through the city’s minutes books from 1876. Each of the four handwritten journal-type books are of about 250 pages. We had hardly made a dent in the first when time ran out, but we will go back because we found much of interest, at least to us.

“After the first attempt at incorporation in 1851, when a legislative action cancelled the fledgling town’s efforts by requiring at least 200 voters in order to qualify, the idea of incorporation was shelved until 1876.

“By this time, the city was riding the crest of prosperity. Grain was king and shipping from our waterfront had brought not only the Bray Bros. extensive shipping interests but caused the organization of the Contra Costa Granger’s Association and the erection of Granger’s Wharf along Alhambra Creek. The railroad was coming, with surveying taking place on the waterfront. It was evident that some formal organization was called for.

“The first entries in the 1876 book contain incorporation by-laws and the call for an election. This brought our first surprise and answered a question we had.

“We had long wondered why Simon Blum, one of the city’s wealthiest and most influential men, had never entered politics. Nowhere in the history books can one find mention of his ever participating. We had wondered, too, why only two men were elected to the first board of trustees, when three were called for.

“According to the first minutes, of the three men elected to the original board, L. C. Wittenmyer and Thomas A. McMahon served. The second minutes entry calls a special election by those two trustees, to replace the third elected trustee, Thomas A. Brown, who proved unqualified to run by virtue of his position as county judge. At the second election, Simon Blum was elected and served for several terms.

“At their first meeting, the trustees set their meeting time as 7:30 p.m. on the first Sunday of each month, meeting at T. A. Brown’s law office. (Editor’s note: another paragraph indicates Saturday evening was the actual day. Neither seems reasonable.) They also passed a 15 cents per $100 tax on all personal and real property.

“Later entries that year contain ordinances pertaining to street grading, handling of finances and controlling the unlawful shooting of birds and game in the corporate (city) limits.

“In April 1877, answering the call of citizens, the sum of $75 was voted to construct a pest house for small pox victims.

“Later that year the Northern Railway (owned by Southern Pacific RR) was permitted to lay water pipe from the C Street city wells, down Alhambra Avenue to Thompson (now Masonic) over to Mason (now Ferry St.) and thence down Ferry to the depot. (now known as the old train station). There the water was pumped into a tank for train use.

“Ordinance No. 9 was, again, a response to irate citizens’ petitions concerning the number of stray animals and livestock running in the streets. The resulting ordinance was probably one of the shortest lived in the city’s history, for after setting out the rules concerning fines for seized animals (by name: goats, pigs, horses, cows, etc.), the procedures for owners reclaiming same and disposition of those not claimed, the ordinance went on to lodge enforcement in the person of the county sheriff.

“At the next meeting two Saturdays later, Ordinance No. 9 was rescinded by Ordinance No. 10. It seems that the sheriff did not live in town, was not available to catch stray animals, and in short, refused to cooperate.

“Ordinance No. 10 rewrote the earlier ordinance, scrapped the reference to the sheriff and appointed a constable, thus our first animal control officer. It also mentioned that it would be a misdemeanor for the constable to refuse to apprehend a complained about animal, thus removing a chance for favoritism of a crony to get in the way of the law.

“There are no entries of note until early 1884 when, on demand of the citizens, an election to re-incorporate as a sixth-class city was called. There were 177 qualified voters in that May election, which increased the number of trustees from three to five. Again, a special election was needed due to a tie for fifth trustee.

“One of the first ordinances passed by the new board could well apply today (1985). It called for the cessation of fouling of Alhambra Creek. It demanded that there be no further dumping of rubbish, dead animals or their offal or any other foreign matter in the water course. It also provided that all residents living along the creek must remove their “water closets or privies” from creek banks and must dig pits.

“Another ordinance created the office of Pound master, relieving the constable of errant animal duty.

“In July 1884, the ordinance for setting grades for downtown streets in preparation of curbs, gutters and sidewalks passed and gravel was ordered, while later that month an ordinance forbidding boys and young men from hopping on moving trains within the corporate limits became law.

“In September, the new sixth class city raised taxes to 45 cents per $100 and hired a night watchman to patrol the downtown sector from dusk to dawn.

“By the end of the year, eight street lamps had been installed by city order and citizens were appearing to request similar lamps near their homes.

“Although it took 92 years to accomplish, John Potter was put in charge of raising a fund to create a public plaza – what, in 1976, became the Don Ignacio Martinez Plaza, on the property left for that purpose by the heirs of the Martinez family.”

Editor’s note: More about the ‘rest of that story’ next time. 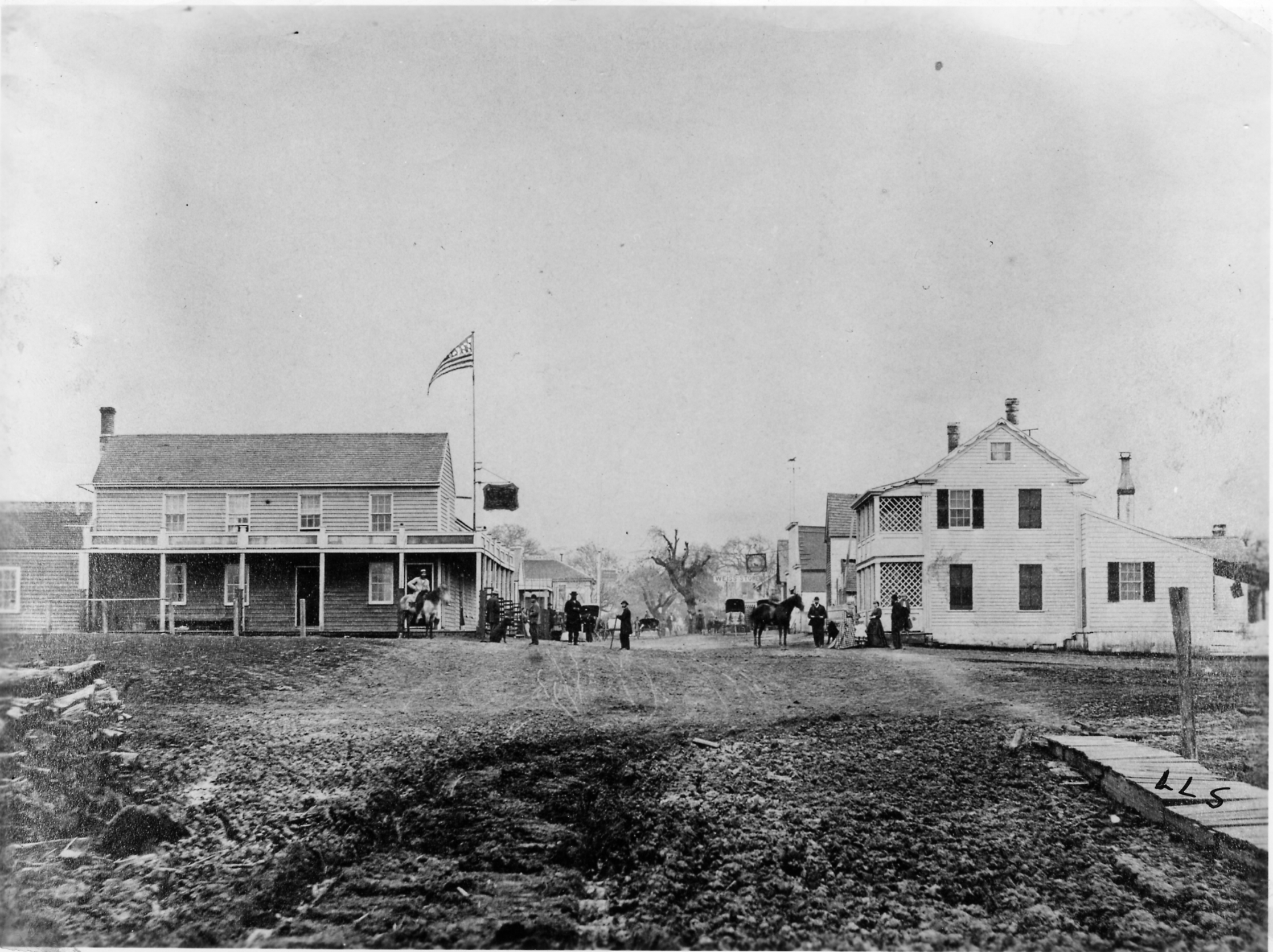 This view of Ferry Street looking south was taken at an unknown date but early in the town’s history. The building on the left, marked with #! was a hotel, possibly one of the first if not the first built as gold seekers came to Martinez to take the ferry over to Benicia as the first step to the journey to the Mother lode. The building on the right (marked #2) is thought to have been a rooming house. Of interest in the picture is the state of the street in the foreground. The ferry travellers and their wagons and horses churned up the soil, especially after rain. The same thing happened to the roads, many of which were little more than wide paths. So one of the very first acts of the newly incorporated city government in 1876 was to order grading and maintenance of the roads. Eventually, the standard block formation for American towns was created that we take for granted today.

Saturday, September 29, 10-3 p.m.: Here is a novel way to celebrate the history of Martinez, and also support the Martinez Museum and American Archive Month: The Martinez Archive Crawl! (aka the “Crawl Without Alcohol”!).

Attendees or “Crawlers” tour among four host archives in Martinez, gathering stamps in their passports as they learn to research, find cool things found only in an archive, visit with archivists, and go on special behind-the-scenes tours. There will be a scavenger hunt for K-6 and 7-12 and young-at-heart adults.

All locations are within walking distance from one another starting with registration at the Veteran’s Hall, making this an easy and fun day for all ages!

Visit the www.martinezarchivescrawl.com for more information.

One Reply to “Our Town: A city without a city hall”