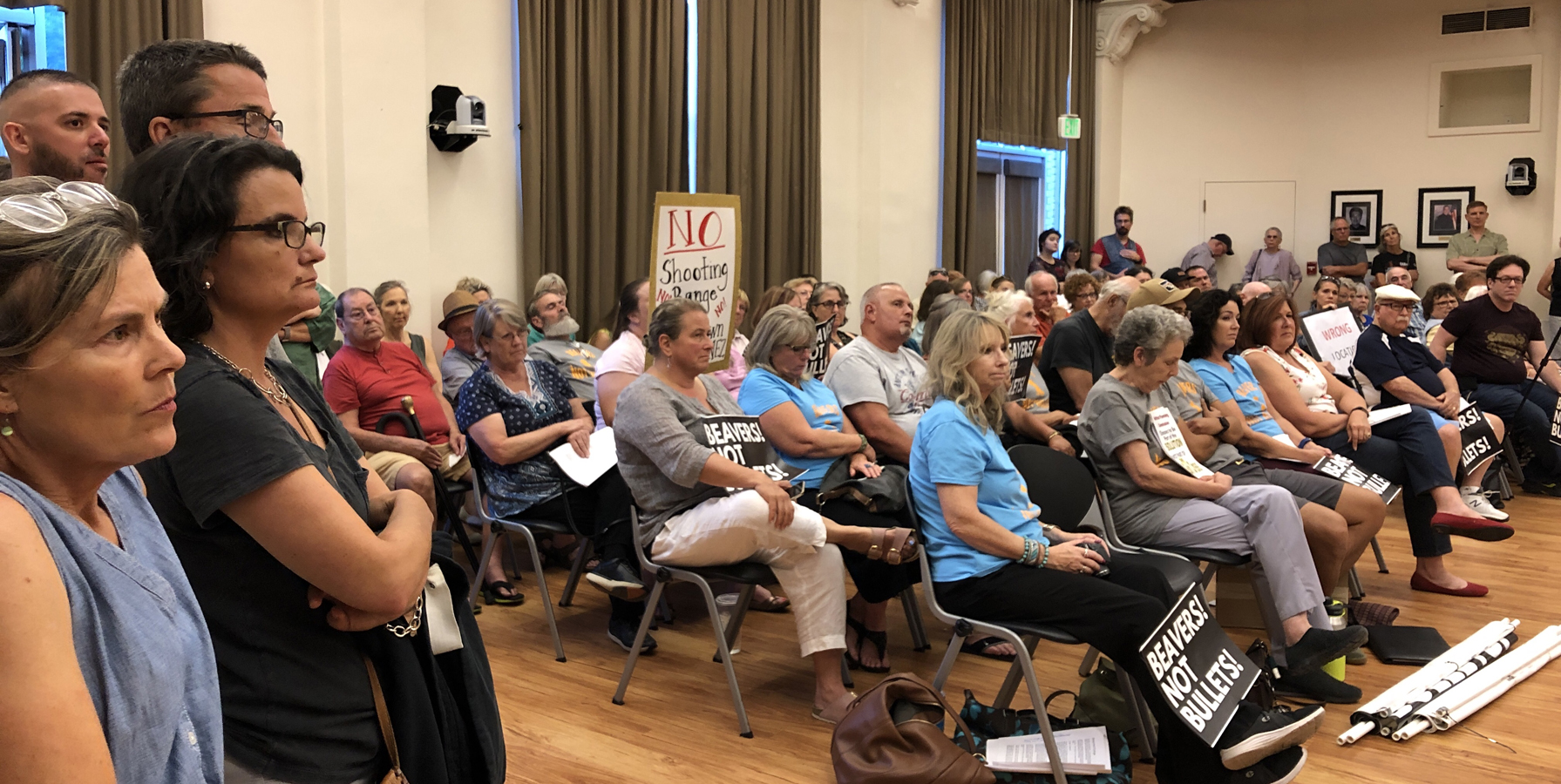 MARTINEZ, Calif. – If Brandon Varise proceeds with the Flexsquare LLC application for Off Trail Outfitters, a flagship sporting goods store at 604 Ferry Street, there will be no enclosed shooting galleries with it.

The audience burst into applause when four members of the City Planning Commission unanimously passed a resolution recommending the city council deny the applicant’s request to amend the city’s Municipal Code to allow the galleries within the Commercial Core, at the Aug. 27 meeting.

Why no shooting galleries

The resolution gave a number of reasons for the decision but primarily, it is inconsistent with the Martinez Master Plan and there was significant public opposition to the proposal.

Most of the people appreciated the prospect of the Off Trails Outfitters store but did not want shooting galleries, especially downtown. The crowded room was filled with people who commented, carried signs, emailed and submitted letters explaining their concerns and fears about safety, diminished property values, local disharmony, and damage to the city’s reputation.

Some favored the shooting galleries, which would have been underground and not to be accessible from the store. However, they constituted the minority.

Varise said he expected the decision based on the previous Planning Commission meeting, July 23. “It’s not a deal-breaker, Varise remarked after the decision.

“Our goal is to help people get into nature. I love hiking and camping with my family,” he said. “My main thought was to get people to come here.”

He appeared to take the long-awaited decision in stride saying, “It would have taken a long time to get done… and it would have been expensive.”

The feeling in the opposition camp was jubilant, with one person thanking the Commission for “saving our town.”

Varise filed an application in February, for the facility at which he plans to have a giant aquarium (perhaps to try out fishing rods), rock climbing, a view of the Benicia/Martinez Bridge and Carquinez Strait from the roof, and every imaginable type of wilderness and sporting gear.

With a city staff recommendation to approve, the application reached the Planning Commission with a request to change Municipal code to accommodate the shooting allies in April.

Due to a public noticing error and lack of a quorum, a public hearing on it did not occur until July. Vocal opposition to the shooting galleries, to augment the business, convinced the Commission to have staff prepare a denial resolution, which they passed.

Although the application process has taken a long time in a city that is eager for new businesses. The City council may be looking at the revised application soon.

Measure I and Traditions at the Meadow

The City council is expected to follow the Planning Commission’s unanimous, Aug 27 recommendation and accept clarifications to Measure I, adopted by the voters June 5, 2018. That vote may end a rather epic local battle over development of the former Pine Meadow Golf course property at 451 Vine Hill Way.

The approved recommendations divide the property into four parcels, the largest of which will be an 8.22-acre public park that has been accepted by the City of Martinez. It will be re-zoned as Mixed Open Space-Recreational Facilities.

Recommended facilities for the park are all-abilities playground, parking, bathroom, pathways, trash cans, picnic tables, trees, low path lighting, and a monument sign (not prioritized). If funding is found, future improvements may include a botanical garden, a dog park, and basketball court

Two of the parcels will be used for stormwater detention. Legally, all California water must be captured on the property where it falls if anyone wants to improve a property. The remaining parcel will be for DeNova Homes, Inc. to build 65 homes in R- 7.5 zoning, single-family residential with 7,500 square foot minimum. Future access to the park and homes in the subdivision will be from Morello and Center Avenues.

These changes will be become a General Plan amendment and be on the Zoning Map. Clarifications to Measure I, that were approved by proponents of the measure will be made official by the City of Martinez.

City Council approval of these plans and agreements.