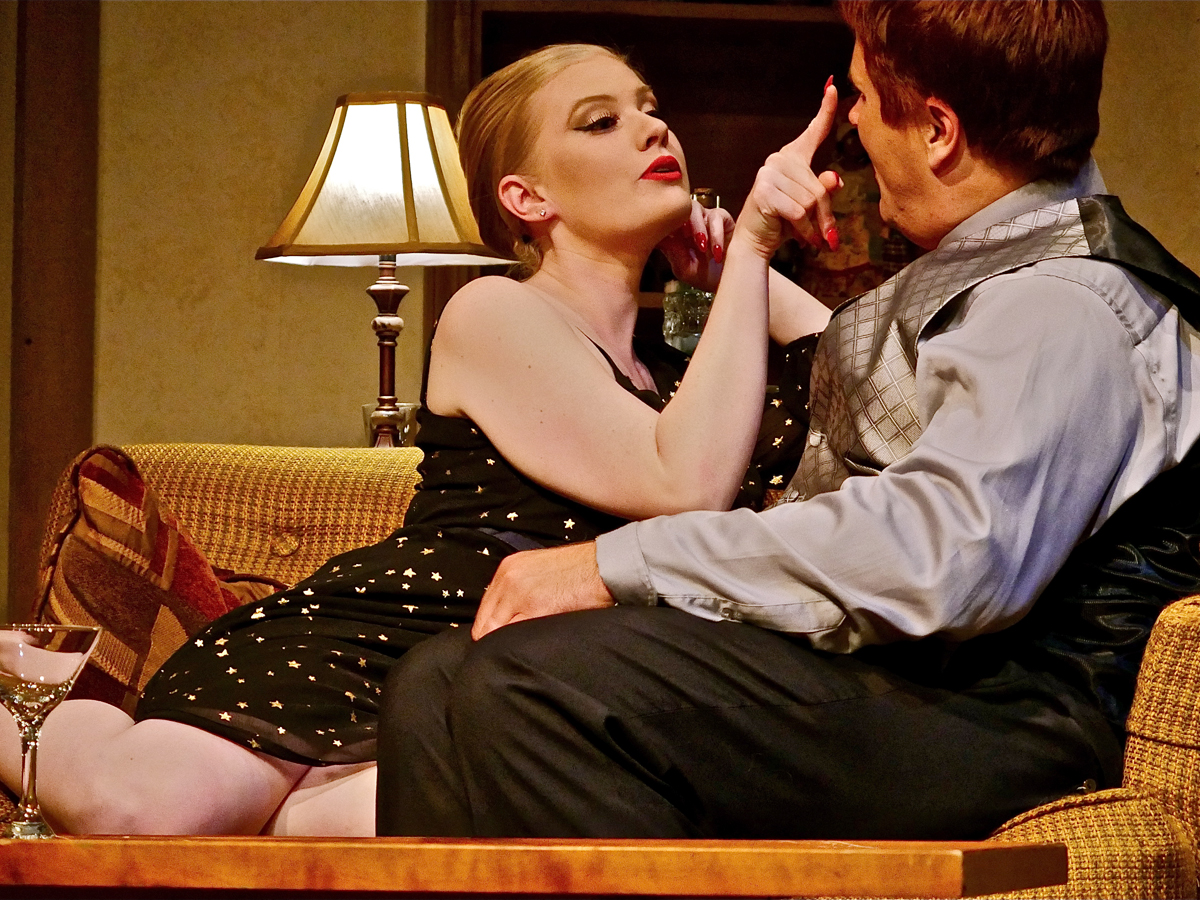 There’s magic on the stage at the Campbell Theater with Plotline Theater Company’s newest play, the enchanting comedic drama “Bell, Book and Candle.”

Originally penned in 1950 by John Van Druten, the play was later adapted into the well-known Academy Award nominated film of the same name, featuring Jimmy Stewart and Kim Novak.

Randy Anger, who directed and produced the Campbell performance, said that he was originally inspired to do the play because of his love for the movie.

“Bell Book and Candle has been one of my favorite movies forever,” said Anger. “I just said, ‘I know it’s from a play,’ so I looked it up, and I went, ‘the play’s better than the movie, scriptwise.’ I mean it just focuses so much on these important characters.”

The play centers around the life of Gillian Holoryd (Anna Oglesby-Smith), the young and attractive landlady of an apartment complex, who is also a witch – literally. She and her Aunt Queeny (Jennifer Lynn Brown Peabody) and her brother Nicky (IanWilcox) are all members of a society of magic users living hidden in plain sight in 1950s New York.

Gillian has just returned from an extended trip to Mexico and has discovered, upon her return, a certain dissatisfaction with her life. She doesn’t want to visit her regular haunts or hang out with her regular friends, and can’t quite identify why. She also finds herself attracted to her new upstairs tenant, Sheperd Henderson (Edwin Peabody).

Sheperd sees her as nothing more than a landlady, although she piques his interest when she tells him she may be able to get him in contact with Sidney Redlitch (Jerry Motta), an author exploring the world of the supernatural that his publishing company wants to sign.

Gillian is a smart and careful witch, and while she would normally avoid using her magic in a flashy or impetuous way – and indeed, berates Aunt Queeny for doing so early in the play – when she discovers that Henderson is romantically involved with her college rival, she decides to make him hers, casting a spell to make him fall madly in love with her.

But while things appear to work out for her initially, magic in Van Druten’s world is not simple or straightforward. It does not upend the laws of physics or make possible that which could not have happened, and sits uneasily with human emotion. And when a literary collaboration between Sidney Redlitch and Gillian’s brother Nicky threatens to expose her witch side to Sheperd, everyone – especially Gillian – learns exactly how dangerous it is to try and blur the line between magic and love.

Throughout, the play makes copious use of both comedy and drama, with a wealth of lighthearted quips and jokes wrapped around a core of emotional depth. And though the romance starts with a magic spell, it eventually takes on a life of its own. Edwin Peabody said that the chemistry between Van Druten’s characters make the play work.

“The relationship between Gillian and Shepherd is really what drew me to this play to begin with. They really enjoy each other’s company, and you see it in the writing. ”

The cast is phenomenal, bringing the somewhat fantastical script down to earth. Motta and Jennifer Lynn Brown Peabody mostly play their characters for laughs, and earn them well. Wilcox plays Nicky as a mischievous Puck-like figure, happy to enjoy any chaos or misfortune around him as long as it amuses him.

“He’s a fun one, because he’s this devil-may-care flamboyant guy – he has fun with life, and that is always a pleasure to play.”

Campbell veteran Edwin Peabody is a joy to watch, first as the straight man muggle, and later as a man enchanted, groping around the outline of something being wrong, but unable to identify it.

But it is Oglesby-Smith who steals the show as Gillian, She makes Gillian and her journey of love and loss real, and character growth that could have felt two-dimensional in someone else’s hands is rich and textured in hers.

Oglesby-Smith said that Gillian’s transformation was one of the most interesting parts of the role.

“I love how layered she is; I love discovering new moments for her,” she said. “It’s challenging. It’s very difficult to do it in a way that’s subtle enough, but is also impactful enough so that you notice the difference in her between act one and act three, but it doesn’t feel abrupt.”