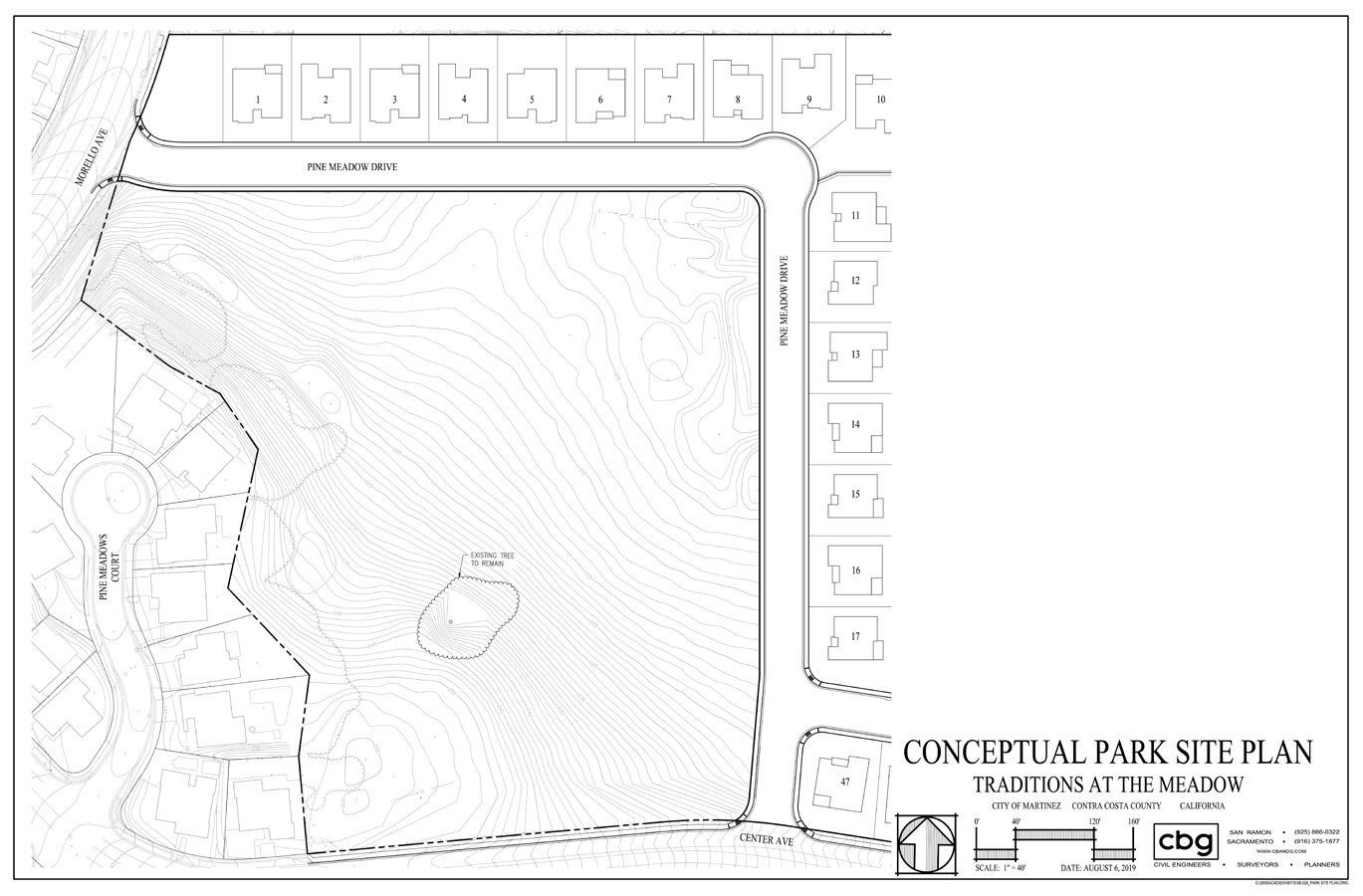 MARTINEZ, Calif. – There was a good turnout and plenty of ideas at a charette for a new park at Traditions at the Meadow, formerly Pine Meadow Golf Course on Vine Hill Way, Aug. 10.

The whole crowd at the Park, Recreation, Marina and Cultural Commission event got a quick course in landscape architecture before they gathered around tables laden with topographical maps and templates (to scale) of suggested improvements.

The procedure started with Facilitator Frank Kluber’s statement that no one had said they wanted a parking lot. Apparently, parks need some kind of parking to avoid impacting the neighbors, and there is only one place on the property that ingress and egress makes sense because a side street feeds in there. That means the first thing to place on the maps is the parking lot template.

He went on to describe the property which has places where grades are as steep as 19 to 20 percent. Fortunately, those are in the area of the Heritage Oak tree that must be saved.

The other limitation is the size. Only so many amenities will fit on 8.2 acres of useable land (9-acres minus setbacks on the map). “Martinez has 19 parks. the go from the smallest at a quarter of an acre to the largest that is 42-acres,” remarked Commissioner Richard Patchin, indicating that 8.2-acres is not small.

Then there is the need for bathrooms if small children are expected to come to the park, there were many requests, – add a template.

There were many questions, a significant number of people were not completely up on the status of the project and it is still not 100 percent settled whether the City of Martinez will keep and maintain the park or if it will go to another entity that will keep it up.

Among suggestions for improvements were a soccer field, putting green, tennis court, bocce, a dog park, a splash pad, and more.

Mark Thompson and others said they want a “minimalist” approach with some trees for shade, a children’s play structure, benches, open space for wildlife and maybe a few tables.

Someone brought up the maintenance costs and the facilitator said not to consider the cost at that point, another brought up a dog park, which he discouraged. A show of hands revealed only one person there for a dog park. Kluber was ready to remove that option until PRMCC President Dylan Radke insisted that nothing be taken off the table. “Remember this is a community park,” he said. “Everybody counts.”

At last, it was decided that people would gravitate to one of the three tables, adding, combining and moving templates of their desires.

The audience laughed but got the idea of intensive use, moderate uses or minimalist improvement.

Apparently, the eucalyptus will be removed because of the fire hazard

Jeremie Lopez said, “We are going to go over all of the people’s comments and make a recommendation after we see what the staff comes back with.”

The plan will go to the Planning Commission for further public review on August 20, and subsequently, there will be a public meeting with the city council. More information is available on the city website or at city hall.