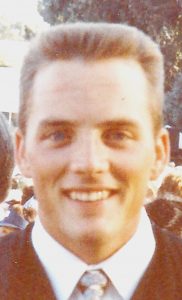 Robert, Bob/Bobby, had a brilliant mind like his father, a beautiful mind, and he was a gorgeous looking fellow as well. A charmer with iridescent blue eyes. Robert loved live basketball games, especially the Warriors. Brilliant and beautiful Bobby graduated Alhambra High School in Martinez and U.C. Santa Barbara at the top of his classes.

He worked for many years in finance for some major corporations. He had the makings of a golden boy. He was also very good as a car salesman. Robert produced Skylar Henderson who is now 11 years old.  He was very proud of her and her photo was in his wallet when the coroner returned his effects.

Robert Bruce Henderson had a tremendous sense of humor and, despite all, he believed in God very much. Rest in Peace, Bobby Henderson, little brother.