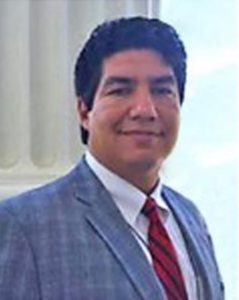 The vote came during Wednesday’s Council meeting, which Figueroa attended.

Figueroa, has been San Ramon’s assistant city manager since 2014, and was chosen from 35 candidates considered in a nationwide search by consultants Avery and Associates.

During his years in San Ramon, Figueroa helped manage a $73 million operating budget and 250 employees, and has been active in establishing and achieving that city’s major economic, environmental, parks, business development and tourism goals, an announcement from the city of Martinez said.

He and his wife of 24 years, Joanna, live in San Leandro. The couple has three children. The family enjoys nature, recreation and historic downtowns, according to the city’s announcement

His base salary will be $234,000 plus benefits and retirement, accrued leave time and other compensations.

Figueroa called his selection “an honor and a privilege,” adding he was “overjoyed to be here.”

He said he first gained appreciation of Martinez while he was in college, when he visited the city to attend an antique and craft festival. He found himself admiring Martinez’s architecture as well as the city’s downtown area.

Figueroa said he is hoping to spend years as Martinez’s city manager, working with both the Council and city employees. “I’m poised enjoy a great run” in a city he said has the best the Bay Area has to offer.

In other matters, the Council unanimously accepted staff recommendations for midyear adjustments to the city’s current budget.

He described the General Fund as the city’s checkbook account, because it is the operating fund. Property taxes are expected to be $112,000 higher than anticipated, even though revenue estimates already had predicted a 5.25 percent increase, he said.

Local sales taxes are expected to be $850,000 higher, too, he said. Measure X money, approved by voters in the November, 2018, general election, is a general half-cent sales tax that was proposed to keep city services at the same level despite rising costs.

The estimated increase is based on similar results for the Measure D road-repair half-cent sales tax approved in 2016, although unlike with Measure X, Measure D’s revenues do not go into the General Fund.

But Measure X money will, once it becomes effective April 1, Glasser said. California will begin collecting the tax on the city’s behalf, and deliver estimated revenues to Martinez. Eventually the state will give the city a “true-up” statement that will be a more accurate number.

Meanwhile, Martinez and other California cities are watching as the state deals with a computer programming glitch that is impacting how it collects sales tax.

Before he left office, then-Governor Jerry Brown changed the agency that collects sales tax, from the Board of Equalization to the new California Department of Tax and Fee Administration, Glasser said.

While the change makes sense overall, he said, the new office has experienced software problems that has been rejecting sales tax returns, including that of one of Martinez’s larger source of such revenue, Walmart.

The revenue-collecting office is attempting to correct the glitch, he said.

Among the revenues Martinez is collecting for the first time is $900 in cannabis tax, the city’s share of county revenues, he said.

Much of this involves changes in the city’s Social Security’s payments related to the dissolution of the Pleasant Hill-Martinez Joint Facilities Agreement that resulted in lengthy negotiations about workers that were declared city employees rather than those of the two-city alliance.

While those employees will be credited for Social Security benefits for the entire time they were counted as working for the agreement, the city is being held accountable for three years of Social Security payments, and has taken out a loan to settle those payments.

Those payments impact the budgets of multiple city departments.

The city also will be paying more for maintenance of its camera and license reader equipment and server storage and must cover field maintenance that was expected to be underwritten by rental fees paid by the owner of the Martinez Clippers, Paulette Carpoff, who with her husband, Jeff, and their companies have declared bankruptcy after an FBI raid and investigation left their bank accounts and assets frozen or confiscated.

Other additional expense come from salary increases; software needed for accounting related to budget preparation; the need to comply with new state mandates for street signage and striping; vandalism repair especially at Martinez Waterfront Park; additional foul ball netting at Waterfront, Hidden Lakes and Mountain View park ballfields; the installation of a computer maintenance management system at Corporation Yard and the water treatment plant; and the inclusion of a $10,000 machinery shop expenditure that inadvertently was left out of the past budget cycle.

Another expenditure approved with the rest of the adjustments is $4,000 for celebrations of Martinez elementary schools’ pupils and their accomplishments in the area of recycling and conservation.

Another change that would impact California is a change in the rules for online sales taxing.

Slated to become effective April 1, the change is part of Gov. Gavin Newsom’s proposed budget and would assure that online sales would produce sales tax revenues.

A question remains at what threshold would trigger the tax, although one version requires retailers to collect and submit sales tax if they had $100,000 in sales or 200 transactions in California during the previous year.

However, some in the State Legislature have wanted to protect smaller companies and set the threshold at $500,000 in sales the previous 12 months.

Other states are dealing with the situation, too, from the South Dakota vs. Wayfair court case that dealt with a state’s ability tax remote sales to Georgia’s requirement that those selling to its residents must register with the state and South Carolina ongoing negotiations with Amazon about sales tax collection.