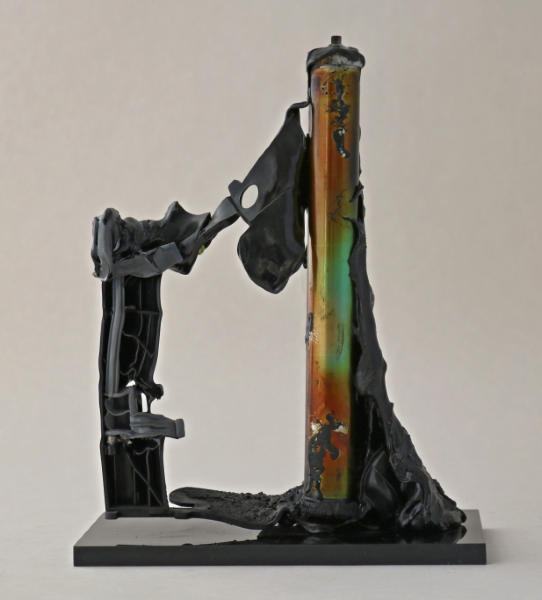 A giant patch of garbage that covers twice the area of Texas is growing exponentially in the Pacific Ocean between Hawai’i and California, according to Scientific Reports.

And much of the debris are tiny pieces of plastic, which is why the patch wasn’t discovered until 1997 by yachtsman Charles Moore when he sailed through the garbage. Those particles of broken-down plastic are hard to see.

The “Great Pacific Garbage Patch,” as it is called, has been worrying scientists who have endeavored to find a way to clean up the massive mess.

Meanwhile, in Benicia, across the Carquinez Strait from Martinez, one man is doing his part to prevent plastic from making its way to the ocean. Mike Wittels salvages plastic and turns it into art.

He cleans the plastic, then saves it until he needs specific pieces for his art.

Putting carefully selected pieces, he puts them on a table he’s covered with flat aluminum paints. Then, grasping an industrial-strength heat gun in each hand, he takes aim at the plastic pieces, and watches how they react to the heat.

Each type behaves differently, Wittels said in his description of the process. “Some shrink, others pool or drip or bubble,” he said.

He’ll change the distance, angle or temperature of his heat guns. He’ll also use his fingers or pliers to pull at a section of a plastic piece. Sometimes he’ll flip them like tiny pancakes. Other times, he’ll use pliers to lift some of the pieces so their shapes drip or sag down.

“In a way, the process is like stone carving, because you have to pay complete attention at all times,” he said.

“In another way, it’s like photography, because the exact moment is all-important. If you just keep heating the stuff, (it) turns into a lump or catches fire.”

When he finishes heating the plastic pieces, he’s still not done. Wittels then pins the pieces to his studio wall, where the tiny sculpts await their turn to be used in a free-standing sculpture or other installation.

Wittels will be part of Benicia’s Open Studios, a weekend event May 5 and 6, when the public is welcomed by artists to see their workplaces as well as their art.

But this is the first time in 11 years Wittels has joined his fellow artists in the Open Studios event.

Visitors will get to see one installation that is taking up more than 90 feet of his studio’s wall space, a 9-foot tall tower made entirely of plastic and several smaller sculptures and wall pieces.

Wittels will be present to talk about his art pieces, and explain how virtually all the materials he uses are plastic that came as wrappers and containers that once held things he has bought.

He’ll also tell visitors that those bits and pieces of plastic – those containers and wrappers, bottle caps and drink containers – could have ended up in the Great Pacific Garbage Patch, had it been discarded.

“For the past several years, I’ve saved virtually every bit of plastic that came my way,” Wittels said.

“There’s an astounding amount of it. I first started using plastic because it was free and did interesting things when heated. As I continued, I began to realize that there are some thought-provoking issues being raised.

“Plastic is made from petroleum and is the second greatest use of that resource, after oil,” he said. “Yet people continue to buy and then throw away scads of things like those small water bottles, where the cost of the contents is only two percent of the value of the container.”

Wittels said he is using his art to do more than create beauty or have a medium for self-expression.

“I hope what I’m doing can help people stop and think about these things. Perhaps what is in my studio should be called, ‘Global Warming: Cause and Effect.’ I mean, if the planet continues to heat up, maybe the whole world will look like my studio.”

Wittels has lived in Benicia for 36 years. But he trained in classical sculpture, design and drawing at the Pennsylvania Academy of Art and The University of the Arts, both in Philadelphia, and has been an artist for more than 50 years.

He has had solo exhibitions in such diverse places as the Savannah College of Art and Design, Nordstrom’s Walnut Creek, Cielo Gallery and Napa Valley College.

He and dozens of other Benicia area artists will open their studios to the public from 11 a.m. to 7 p.m. Saturday, May 5 and 11 a.m. to 5 p.m. Sunday. Admission is free and refreshments will be served. In addition, Wittels will give away a door prize each day.

One Reply to “Salvaged plastics become art, not ocean trash”