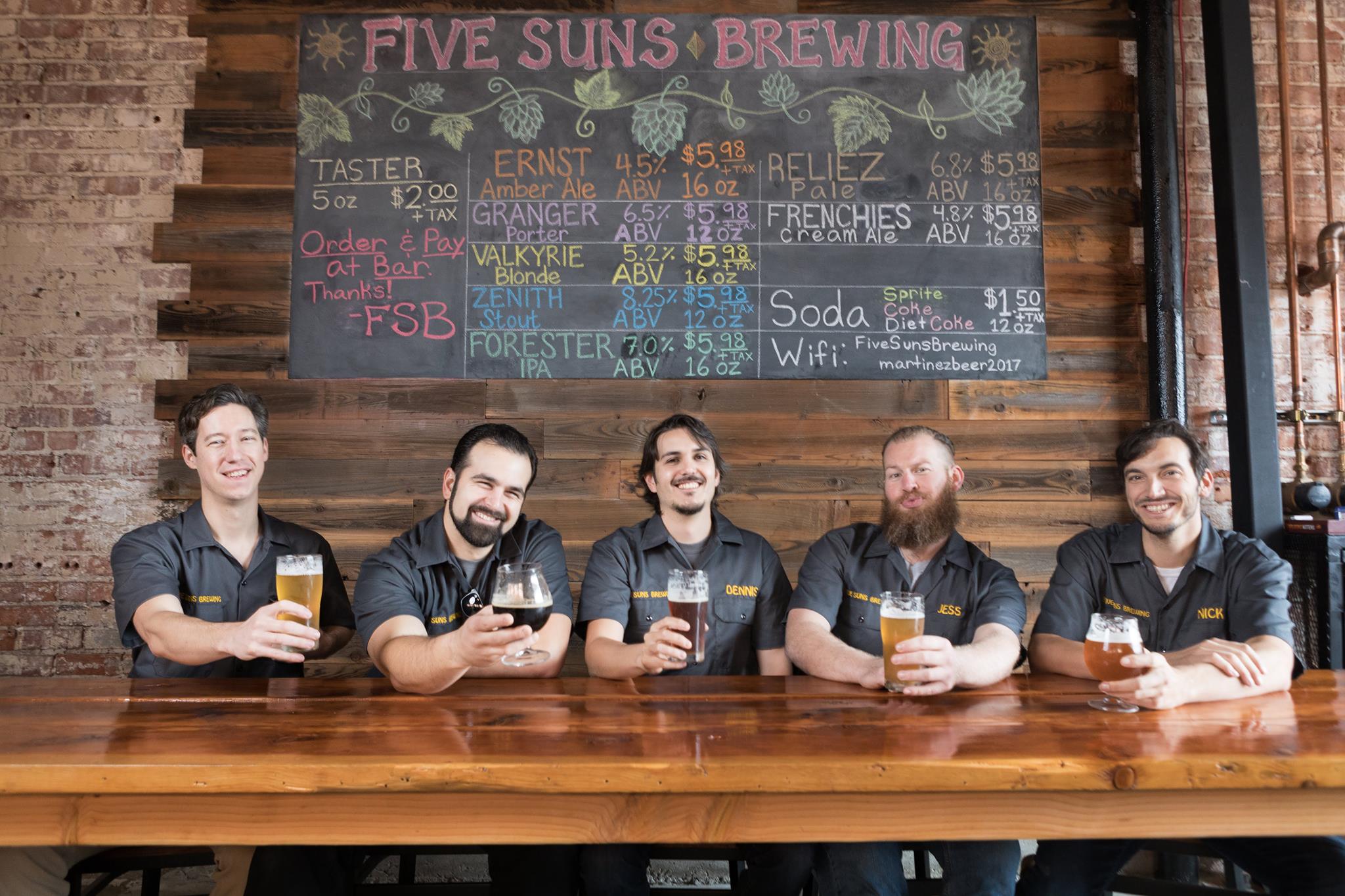 MARTINEZ, Calif. – An emerging microbrewery cluster is blossoming in downtown Martinez and pollinating Main Street businesses with new customers. Del Cielo (“From Heaven” in Spanish) and Five Suns Brewing both opened recently and are serving up microbrews while building synergies with downtown businesses.

“Our microbreweries are a point of interest,” said Nick Riccobono, one of the Five Suns Brewing owners. “Come for the microbrew, stay for the restaurants, the Campbell Theater, and the shops,” he said.

Del Cielo owner Luis Castro concurs: “All the downtown businesses are supporting each other and bringing new customers from nearby cities to downtown Martinez.”

One block away from the two new microbreweries is Creek Monkey Tap House, which Riccobono says inspired him to begin brewing. “I visited Creek Monkey five years ago and that was my inspiration to begin homebrewing, which eventually led to Five Suns. And there was no better place to open than downtown because the five of us (the Five Suns owners) grew up in Martinez.”

The growth and transformation of downtown Martinez is the culmination of many years of hard work and risk-taking by business owners, investments by commercial property owners, and business development support from City staff and Main Street Martinez.

Castro credits the Martinez Zombie Crawl, an event organized by Main Street Martinez, for attracting his brewery to Martinez. “We fell in love with the warm welcome from the local businesses and the community when we told them we were looking for a location for our brewery,” he said. Leanne Peterson, Executive Director of Main Street Martinez, started the Bay Area Craft Beer

Festival and beer crawls years ago “to draw awareness to the craft beer industry and the possibilities that exist here for breweries. Craft beer has been the catalyst for revitalization in many communities and we felt they would be attracted to the authenticity, character, and the red brick buildings we have in downtown Martinez.”

As interest in downtown Martinez has heated up, City staff has been busy guiding business and property owners through the building, fire, health, and accessibility requirements of local and state agencies. When new exciting businesses open, revenue is generated for police, fire, parks, libraries, recreation facilities, senior programs, and other city services.

Downtown Martinez is catapulting from an undiscovered gem to a regional destination as historic buildings arbeing restored and new businesses ushered into Main Street. Visitors are travelling from all over the Bay Area and beyond to visit the new microbreweries, attend a Main Street Martinez event or festival, and the Martinez Clippers professional baseball games. Once here, visitors notice our new and venerable restaurants, wine bars, coffee houses, fitness studios, and home decor, antique, and accessory shops.

“Young people want to be downtown and walk to everything, and now they can do that in Martinez,” said English. “Downtown is getting that hip factor.”

This story previously appeared in the June 2018 City Manager’s Report. To subscribe go to www.cityofmartinez.org/contact/mymartinez.asp.