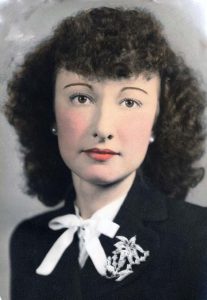 Vania K. Bartolini, born and raised in Martinez, passed away quietly on April 17, just missing her 100 birthday by a little over a month. She was born on May 20, 1919, and graduated from Alhambra High School in 1938. In the summer of 1941, she married Vito Bartolini.

During WWII Vania worked at the arsenal in Benicia and after became a homemaker. Vania was a quiet lady who loved cooking and taking care of her family. There was always a pasta dinner cooking in the late morning on a Sunday for a delicious traditional Italian meal at 1:00 p.m. Vania enjoyed her home and her family.

She is survived by her son, David Bartolini and nieces and nephews. Preceding her in death were her parents, Mr. and Mrs. D. Valdisalici, her husband of 70 years, Vito Bartolini, and her son, Donald G. Bartolini.

Friends and Family are invited to a Funeral service on Thursday, April 25, at 11 a.m. at Connolly & Taylor Funeral Chapel. In lieu of flowers the family request donations to Hospice East Bay, 3470 Buskirk Ave., Pleasant Hill, CA, 94523 or a charity of your choice.