by Kevin Murray
Special to the Gazette

We are fortunate here in Martinez to have a truly world class automobile collection on display, the Cobra Experience Museum.  The collection is built around one man’s dedication and fascination with the AC Cobra, a hybrid of 1950s British sportscar elegance with the raw power of 1960s Detroit muscle, and the support of his family in achieving his dream.

On Saturday June 1st, Cobra Experience hosted an all Ford car show, with over 100 cars on display, including vintage Fords of many types along with classic and modern Cobras and Mustangs.   But if you missed the show, the museum is open to the public the 3rd Sunday of each month from 10:00 am to 3:00 pm, and they host several other shows throughout the year.

The roots of the Cobra are in an elegant 1953 British design, the AC Ace.  Like many British manufacturers, AC Cars had been using straight-6 engines in their upper-end sports cars. But by the late 1950s, they needed a bit more power to be competitive.  At the same time, Ford was looking for a vehicle which could take-on the Chevy Vette.

In 1961, former race car driver and automotive designer Carroll Shelby contacted AC and began mating the AC Ace body with a Ford small-block engine, a custom chassis, and parts from other cars, including a Jaguar rear-end, MG rack and pinion steering, and a VW steering column.   Later a heavier frame and suspension would support a big-block Ford 427 engine.  There were many variations on the theme, and almost every car was unique as new ideas were incorporated.

After this success, Shelby would make similar modifications to Mustangs, and then take over the Ford GT-40 racing program.  He was also involved in the design of the V8 powered Sunbeam Tiger and received a royalty from every car produced.  In the 1980s Shelby began a two-decade relationship with Dodge, but in the early 2000s, he was working with Ford again, and in 2003 he formed Carroll Shelby International.

In the early 1970s, Drew Serb, founder and curator of the Cobra Experience Museum, became fascinated with the AC Cobra and all thing Shelby.  Over nearly 50 years he has become experienced in repairing and rebuilding Cobras, and has amassed a world class collection of these cars, along with other Shelby, Ford, and AC related items.

Drew began working as an audio engineer in the early 1970.  Soon after, he acquired his first Cobra, a $1,500 wreck.  He restored the car and sold it to fund the startup of his own business, a highly respected professional audio/video engineering firm, which he still owns today.  Drew has worked on about 70 Cobras since then and his hobby has grown into a thriving second business, where his reputation for period-correct, excellent restorations is well known throughout the Cobra community.

The Cobra Experience is a family run 25,000 sf museum located here in Martinez.  Drew’s wife Janet along with their daughters Emily and Kate help run the museum, and support Drew in his hobby and businesses.  Currently there are 24 cars on display, including several original Cobra’s and Shelby Mustangs, along with a Daytona Coupe, GT40, King Cobra, Sunbeam Tiger and a Lotus. There are engines, wheel displays, posters, photos and a shop scene, showing Shelby American as it was in the 1960s.  I suggest making a point of getting over to Cobra Experience, you won’t be disappointed!

Steve Coito, of Pleasant Hill, owns this 351 Windsor powered 2003 AC Cobra reproduction. It is a special design to accomodate drivers with long legs.

Will & Henry Custer of Concord with a 1957 Ford sedan. Will owns Will’s Body Shop, and has two vintage Corvettes, but he enjoys cars of all types – even Fords.

Mike & Jan Querio (right) of Alamo brought their 1967 Sunbeam Tiger Mk II, a British sports car with a Ford V8. Shown on the left are their niece Jessica with her friend Nick, and on the right are Grandkids Gianna and Jack, along with great niece Erin.

Martinez comedian Bob Johnston, admiring an AC Cobra 427, what he considers to be the most beautiful car ever made. He is a former ’66 Mustang owner and big fan of Caroll Shelby. 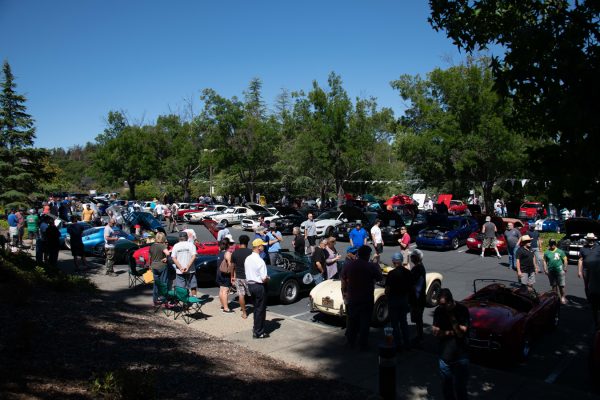