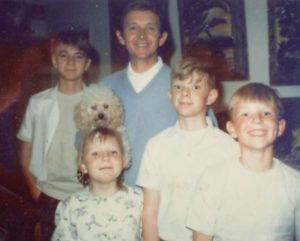 When I was growing up, we always had a dog in the family. The first dog that I distinctly remember was brought home by my mother when I was in first grade. Missy was a beautiful snow white toy poodle who grew to be about a foot high. Mother impressed upon us that this dog was very expensive and even came with papers. That did not impress me much.

Missy was crate trained. She had a little wooden box with steel mesh on the sides in which she slept and escaped from us kids. That was her safe zone. Mother explained that every animal needs a safe zone where nothing can disturb it. (People are the same.) When Missy was in her crate, we were not allowed to talk to her, touch her, make loud noises near her, or even stare at her. I remember my mother and my sister were protective of Missy and kept a wary eye whenever I or my two brothers were playing with her. We would never do anything to intentionally hurt her but, boys being boys, we were often rambunctious at that age.  We loved that dog.

Missy was a great dog. She traveled well and went on all of our trips with us. We took her when we drove to Nebraska to visit Dad’s relatives and when we drove to Maine to visit Mom’s relatives. Missy was with us when we drove from Florida to California in 1965. She was content to stay in her crate in the far back of our station wagon. She slept most of the time when we were driving and woke up for only meals and rest stops. When we stayed at motels along the way, my father would explain to the manager that Missy lived in her cage so she was allowed in the motel room with us. I can’t remember ever being refused.

When Missy died, we all missed her greatly.  Mom found another toy poodle who was not a purebred but was an excellent dog nonetheless. When he first came all that he could do is sniff around the house at everything and everyone so we called him Snuffy. Snuffy’s fur was an apricot-white color. He was not quite as big as Missy but had lots of energy to keep up with us kids. Snuffy was a chow hound. His constant and every waking thought was to find food. Snuffy would do most anything for a snack. We taught him to sit, lay, fetch, roll over and do different tricks.  I fondly remember lazy afternoons walking the dog or playing in the yard.

Snuffy got too old to play about the same time our neighbors had a litter of poodle puppies. We picked one and named it Missy II because she was a girl. Missy II was the runt of her litter so smaller than most of her breed. She was mostly black with white on her chin and little white tips on her back feet. Missy II was my sister’s dog. She slept under covers in the bed with my sister every night. During the day, Missy and Snuffy would roam the house and backyard looking for things to do and food left unguarded.  We had to be careful not to leave anything edible in their reach but there were sometimes mistakes.

We were sitting in the family room one November Sunday morning  reading the newspaper after church. Missy II trotted in with a lollipop, plopped down in the middle of the room and began gnawing.  “Where did she get that?” Dad asked. Nobody could figure it out. An hour later, the dog returned with a taffy. The next time she left, we boys quietly followed her.  Anyone who has tried to follow a dog without them getting suspicious knows that it is really hard. Luckily, there were three of us boys and only one of her.

Missy II lead us to several dead ends before we spied her slip into our sister’s bedroom.  After counting to fifty, we stealthily peeked to find the room empty but the closet door open three inches.  We tiptoed quietly across the room and threw open the closet door to catch her red handed. On the left side of the closet were built-in open shelves from the floor up six feet.  My sister’s halloween candy was in a bag on the very top shelf. Missy II was four feet off the floor climbing the shelves in pursuit of more candy! My sister was annoyed when we told her the dog had eaten her candy but we all agreed that Missy II would rival any performer in the circus.

Snuffy was an old dog so everyone was surprised when Missy II turned up pregnant. She birthed a litter of two puppies that, combined, were almost bigger than her. She had a very hard delivery so that was the only litter for Missy II but she and Snuffy found other activities to stay busy.

My sister had a friend in school who raised 6-inch tall Bantam chickens.  Roxanne asked and our parents agreed that she could have one if she took care of it.   My sister’s friend delivered two chicks in a cardboard box. The dogs were very interested in the box but did not bother the chicks while they grew up and up and up.  Those Bantam chickens grew to be eighteen inches tall! We never found out why but suspected that the Bantam eggs had mistakenly been switched for Leghorns at the hatchery.  When the chickens got too big for their box, my sister turned them loose in the backyard. The hens spent may happy days in the fresh air clucking and scratching for worms and snails.

Whenever one would wander onto the porch, the dogs would go berzerk until someone opened the door.  The dogs would go tearing out, and the chickens would fly to their safe zone on top the pump house. The dogs would bark for a few minutes scolding the chickens with, “Stay off our porch!” then come back inside.  This happened several times a day so everyone got lots of exercise that year. In the end, we cooked the chickens but the meat was too chewy to eat. From all the running around, they had built muscles bigger than Arnold Schwarzenegger.

My wife was raised with cats.  So now we have a cat instead of a dog.  I miss having dogs once in a while. I agree with Andy Rooney from the show 60 Minutes who said, “The average dog is a nicer person than the average person.” They are more honest and energetic than cats.  My wife says dogs make her feel guilty because they look at her with doleful eyes. I think they do this because dogs (unlike cats) think highly of their owners. There is a lot of truth in the prayer, “Lord, help me be the person my dog thinks I am!”