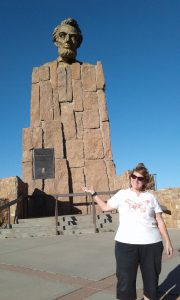 Vivian and I like to travel. Every place that we visit seems to have a special landmark. That got me thinking about landmarks. Webster’s defines a landmark as “an object or feature of a landscape or town that is easily seen and recognized from a distance, especially one that enables someone to establish their location.”

I recall our past visits to countless landmarks. These memories can be collected and shared like trading cards. When I tell someone at a cocktail party that we visited Italy, they ask if we saw the Colosseum, the Leaning Tower, St. Peter’s Cathedral, and other landmarks. It doesn’t matter if we visited in 1919 or 2019. The landmarks in Italy are the same. This person and I have an immediate connection because we have visited the same landmark.

Vivian and I have traveled together for 50 years. In the days before GPS and automated navigation systems, our trips were guided by paper maps and landmarks. I still don’t trust automobile computers one hundred percent. We always carry paper maps in the car as a backup. I trust landmarks most of all.

There is a geologic formation in Nebraska called Chimney Rock. It has guided immigrants traveling west since the 1830s. Vivian and I recently drove past Chimney Rock. It is still a great landmark

Other landmarks are world famous. Everyone instantly recognizes them. The Eiffel Tower in Paris has been a must-see since the 1889 World’s Fair. We have visited a few times and have always been impressed. Vivian even rode an elevator to the top once. I was more comfortable taking pictures from the ground. It is hard for me to trust a 130 year old elevator.

When we visited Singapore last year, one thing that couldn’t be missed was a huge ferris wheel right downtown. The Singapore Flyer stands 541 feet tall and holds 784 passengers at a time. It was the tallest ferris wheel in the world until Caesar’s Las Vegas built one nine feet taller in 2014. I haven’t ridden the Las Vegas one because 541 feet is high enough for me.

Some places only have a landmark and nothing else. Mount Rushmore is a landmark in the middle of nowhere. It was the result of a 1927 federal project to promote tourism in South Dakota. Four presidents were supposed to be depicted in granite from their heads to their waists but the project ran out of money with only their sixty foot tall faces completed. That is still good enough to attract more than 2,000,000 tourists every year. Pretty impressive considering the entire population of South Dakota is less than 900,000. Thanks to Mount Rushmore, tourism is now the second biggest industry in South Dakota, right behind agriculture.

Sometimes everyday things are made into landmarks just for fun. The World’s Largest Catsup Bottle® stands proudly just south of downtown Collinsville, Illinois where I used to live. This 170 foot tall water tower was built in 1949 to identify the factory that bottled “Brooks old original rich & tangy catsup.” The plant is long gone but the landmark is lovingly maintained by a local fan club — just for fun. The Brooks brand is today owned by Birds Eye Foods, and Brooks catsup is manufactured in Canada.

That reminds me of a landmark closer to home. The Milk Farm was a popular restaurant in Dixon since 1926. I remember eating there as a kid on our way back from Reno and Lake Tahoe. The restaurant closed in 1986 but a huge sign with a cow jumping over the moon remains as a landmark on interstate 80. Local preservationists saved it from demolition in 2000 when the restaurant was razed.

Another landmark dear to my heart is in The City. My wife and I were dating in 1972-73 during construction of the TransAmerica pyramid. We watched with fascination from a rear window in her downtown apartment as cranes and workmen toiled high in the air. Vivian and I disagree to this day whether the structure is beautiful or ugly but one thing is certain. The unusual architecture changed our San Francisco skyline forever and created an instantly recognizable landmark.

Right here in Martinez we have some notable landmarks. John Muir’s house comes immediately to mind. Standing beside Highway 4, it marks the gateway to Martinez.

Mt. Diablo (though not in city limits) towers over us visible from 35 of 58 California counties. An urban legend has been repeated for decades that more of the earth’s surface can be seen from Mt. Diablo than any peak in the world. I can not find confirmation of this online so it may be an exaggeration. Whatever the case, Mt. Diablo remains an excellent landmark for cars, hikers, and aircraft alike.

Another local landmark is our County Administration Building downtown. At 12 stories, it is one of the tallest buildings in Contra Costa County. By far the tallest building on the Martinez skyline, “651 Pine” opened in 1954. Sixty-four years later, is outdated and in need of almost $25 million in deferred maintenance. The replacement building is currently under construction and will be completed next year. It will be only four stories tall so probably not much of a landmark.

Vivian and I continue to collect landmark “trading cards.” Our bucket list includes more travel to see more landmarks. Last year, we saw the Parthenon in Athens. This year we saw the Singapore Flyer and Independence Palace in Ho Chi Minh City. Next year we hope to see the Sydney Opera House and Matthias Church in Budapest. The Taj Mahal, Old Faithful, and the pyramids of Egypt are also on our list but will wait for a few more years.

We are truly blessed to live in a world with such rich history and diversity. Landmarks are little designators of each special location. They invite us to learn the story of that particular spot — how it came to be what we see today. Generations of travelers have looked at these same icons and collected their landmark trading cards. Vivian and I are out to get as many cards as we can. They give us something in common with anyone else who has ever traveled… and make cocktail parties a lot more interesting.