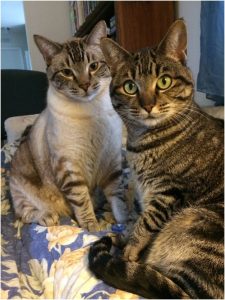 “Meow!” my chocolate-striped grandcat Tina complained when I opened the door to the guest room this evening. It was five minutes after her usual dinner time and she was not happy that I was late. “It’s only five minutes late!” I said with exasperation. She stared me down with her big green eyes until I felt a bit guilty. “Okay. I apologize. I won’t let it happen again.” Tina meowed once more rather huffily and then ran to her dinner plate. What a chow hound.

Johnny, named for John Wayne because he walks with a John Wayne swagger, tentatively poked his head out from under the bed. He saw his mother, Tina, eating dinner, took a step towards her, and froze – suddenly realizing I was there. He looked up at me and his baby blue eyes expanded in surprise. He bolted back under the bed. I’ve only seen him twice since. Talk about a scaredy cat. But I’m working on our relationship.

My daughter Marion, a ranger at Yosemite National Park, has been visiting with us while furloughed during the government shutdown. Her kitty kids, Tina and Johnny, came too. It’s nice to have them all here. When Tina is feeling affectionate I get extra kitty strokes. I enjoy the challenge of convincing Johnny to accept me as well.

Pets in general are wondrous creatures to have in the home. Our cat Lexy came from ARF, the Animal Rescue Foundation in Walnut Creek. We are firm believers in rescue animals for pets. That’s how Marion came to have Tina and Johnny.

Marion’s coworker found a feral cat in pretty bad shape three years ago. Her coworker didn’t have room for more animals, but she took the cat home to nurse it back to health, planning to foster it until she found the female a new home. The cat was named Tina because she was so teeny tiny. Tina came with a surprise – a batch of kittens. One by one, the kittens went to new homes until there was only one left. He was huge with creamy tan colored fur and big blue eyes. Alas, no one seemed to want the last kitten of the kindle (a new word I learned that means litter).

Marion had been thinking about getting a pet for a while and when her coworker told her about the last kitten, Marion agreed to at least meet him. Marion has always been a softie for orphaned animals. Johnny was not a little kitten when my daughter finally met him. He was a handsome teenager: muscular and lithe, with a little Siamese thrown into the ‘Heinz 57’ mix.

It was love at first sight. He went home with Marion that day. Johnny was pretty scared at first, but by that evening he was cuddling up to Marion and following around at her heels all weekend. It was a match made in heaven. Until the first day she went to work and left him alone in the house!

Johnny was not happy. He cried when she went out the door. Then he did his business on the couch, and then on the floor. He cried every morning, made a mess every day, and cried in the middle of the night. Marion was beside herself. She didn’t know what to do. She loved Johnny, but she couldn’t live with a cat who destroyed things. Heartbroken, she called her coworker and made arrangements to take Johnny back.

When she arrived with Johnny, the coworker suggested maybe Johnny was just lonely. He hadn’t acted that way previously, but he had never been away from his mother before. Johnny ran to Tina and seemed happy to see her. Marion’s coworker proposed that maybe if Marion took the mother too, Johnny would be happy and all would be fine! Well, wasn’t that a smart lady! So now I have two more wonderful grandcats, Marion is happy and the lady finally got rid of the cats.

Jeff and I are enjoying the company, but our black-and-white tuxedo cat Lexy is withholding judgement pending further evidence. For their safety, we’ve kept the furballs separated. Gentle Tina and Johnny are twice the size of Lexy, but Lexy has a mean streak. She is a hisser and a scratcher when she is scared. As far as she’s concerned, Johnny and Tina are here on probation.

The cats are slowly communing however. There’s a gap under the guest room door that’s big enough for them to watch each other. Did you know that according to The Huffington Post, cats typically sleep for 12 to 16 hours a day? Now all we have to do is get them to sleep in the middle of the night. I’ve been woken several nights this week to the sound of the cats playing footsie under the door.

I went on the internet to learn the best way to encourage cats to be friends. I didn’t find much about that, but I discovered a lot of interesting cat facts. Did you know that cats have the largest eyes relative to their head size of any mammal? Cats dream, just like people and dogs. Cats walk like camels and giraffes: They move both of their right feet first, then move both of their left feet. No other animals walk this way. I love trivia! Did you know that a slow blink is a “kitty kiss?” This movement shows contentment and trust. When I heard that a while back I tried it on Lexy. Sure enough, she gave me a slow blink back. I think my cat loves me, too.

Cats can jump up to six times their length. I can believe that for sure. We had a cat named Kitty that in three bounces could leap from the ground to the top of a six foot fence, to the garage roof and into an open bedroom window on the second story.

Crepuscular is our new word for the day. Cats are crepuscular, which means that they’re most active at dawn and dusk. Except for when they are running up and down the hallway or playing footsie in the middle of the night. My ranger daughter tells me coyotes and bobcats are naturally crepuscular, as well.

Scientists say that meowing is a behavior cats developed exclusively to communicate with people. I’ve heard this before, but I’ve also seen Johnny and Tina meow at each other and at Lexy. Maybe they are bilingual. Did you know that cat’s nose print is unique, similar to a human’s fingerprints? There are about 88 million pet cats in the United States, which makes them the most popular pet in the country!

I like cats and highly recommend them as long as you’re not allergic, but I’m not a crazy cat lady. We’ve had hamsters, mice, rats, guinea pigs, and fish – lots of fish over the years. We also had a wonderful dog named Dutchess. Just the mention of her name brings back warm feelings. I still miss her so. But cats are our pet of choice at this time in our lives.

As Sigmund Freud said, “Time spent with cats is never wasted.” Lexy makes me happy even when she would rather claw me than cuddle with me. We’ve enjoyed hosting Johnny and Tina this week, and I secretly enjoy hearing them play footsies with Lexy at night. Our lives are full and our hearts are happy.