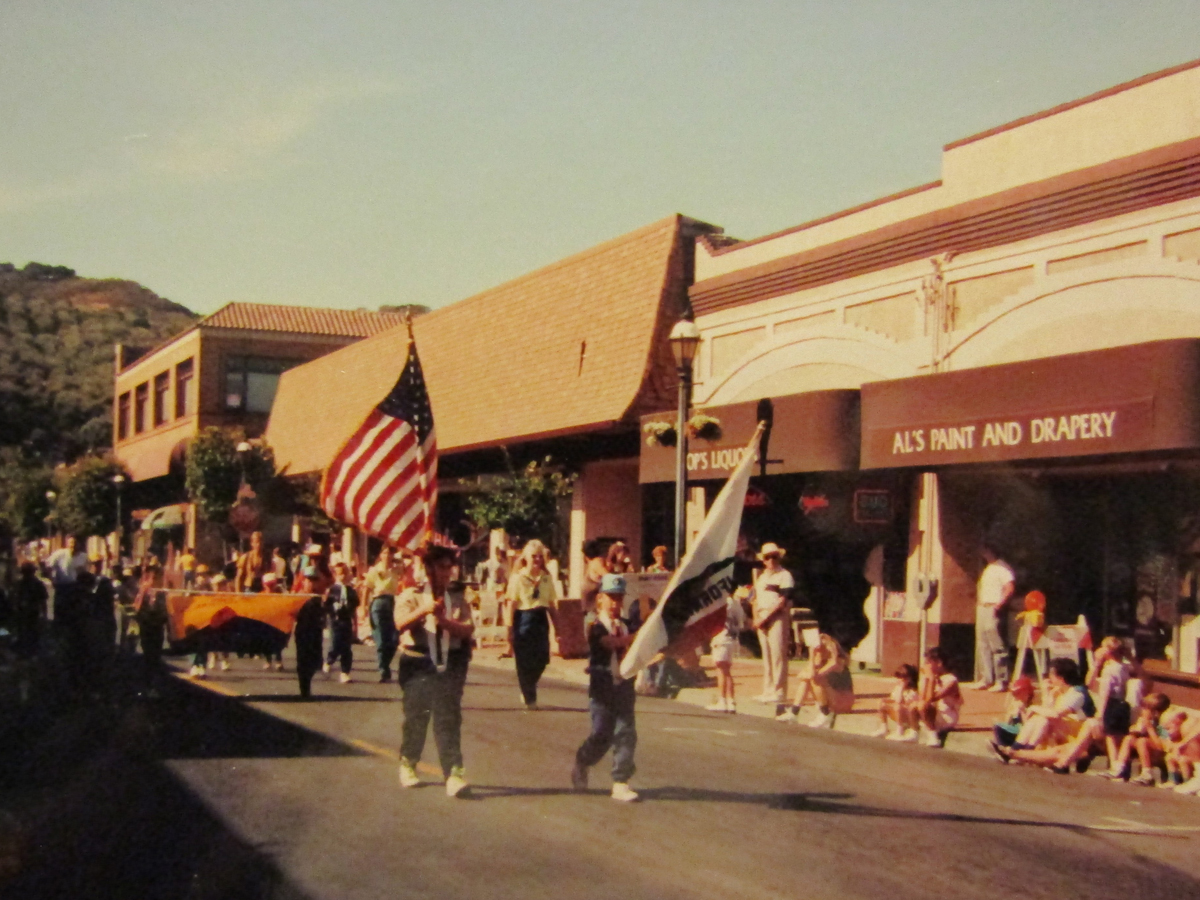 Homecoming parade in the mid 1990s.

We had a little rain and a dip in temperature this week. Autumn is starting to show its colors -blue and gold. Go Bulldogs!

I was talking to my young neighbor, Leah, the other day. She informed me that she’s been having fun after school helping to build the Martinez Junior High School float for the Homecoming parade this Friday.

I mentioned the parade to some fellow parishioners during the St. Catherine’s free pancake breakfast on Sunday. Peggy Hagerthy, a Martinez native, said she’s been going to the parade since the 1960s! She started, just like Leah, in junior high.

Peggy graduated from Alhambra High School in 1970. “We were undefeated that year” she said proudly. Norv Turner and his little brother Ronnie were on the team. “They were nice guys who became professional football players.”

“Homecoming is a big deal here in Martinez,” Peggy said. A lot of town people come out for the game. There’s even an alumni group that’s been meeting in the stands for decades.

The parade always starts at the high school. Police stop traffic on Alhambra Avenue and the whole city turns out. People sit on their porches and in camp chairs on their lawns. The route is lined with cheering spectators. Small children join the parade at City Hall to continue to the judging stand on Main Street. 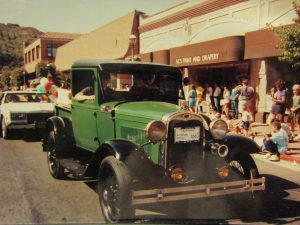 All the schools in town participate from preschools to the high school. If the day care centers are not in the parade, they are watching it. Peggy is a retired school “Lunch Lady”. In the 1990 and 1991 parades, she drove her 1930 Chevy with all of the AHS Lunch Ladies waving from the windows! Her husband Al and the Model T Club drove their vintage cars many times in the parade too.

“For years Jim Nierhake pulled 4-H kids in his trailer. My son Travis still remembers rolling down the street in the truck surrounded by sheep and chickens,” Peggy laughed. When Travis was a Sea Scout, he drove his own truck in the parade pulling a boat.

“It’s a wonderful home town, home grown parade,” Peggy said. The floats are all hand made. Some look very professional because parents start working on them months in advance. A few years back, Martinez even had its own “Town Crier”, dressed in an Old English costume. Redmond O’Connel made announcements at the judges stand. “Hear ye, Hear ye!” he would cry. Another Martinez citizen, Tom Greerty, used to have his own television show. Every year he filmed the parade and talked to people along the parade route.

Martinez is so lucky! I went to Antioch High School and all we got was a float with the king and queen riding around the track at half time. I played in the marching band up in the stands and went to the dance after the game. It was fun, but not Martinez-fun.

I did get to be in a Homecoming parade once. In my first year of teaching high school I was pegged by the principal to be a Freshmen Class faculty advisor. My responsibilities included guiding the freshman as they built their float for the annual Homecoming Parade. All I had to do was stay after school for a week while the kids built the float. They were responsible for everything themselves.

The 14 and 15-year-old students impressed me with their skills. They formed a committee and assigned jobs. The students chose “Class of 1997 – We’re the Bomb!” as their motto. It was a very popular expression at the time.

A student’s uncle loaned his flatbed trailer as the base of the float. Another uncle loaned a four-foot by two-and-a-half-foot electrical marquee sign that flashed the message “Class of 97 – We’re the Bomb!” in the school colors. The students attached the marquee to the back of the trailer with a small generator. The generator started when the students pulled a rope like starting a lawnmower. The marquee flashed brilliantly.

The half dozen students spent three days sticking napkins into the chicken wire wrapped around the base of the trailer. It spelled out their class year. The PVC pipes were bent and glued into a six-foot-tall ball. The committee chairman, a very thorough young woman, securely strapped the “bomb” down to the truck bed. Another group of students taped the black plastic sheeting to it and attached a string of Christmas lights to the top as a “fuse”. It was awesome. The principal came by and told me that it was the best freshmen float he had ever seen. I was very proud of those kids.

Before school on Homecoming day, the uncle parked his truck and the float behind the stadium ready to go before he went to work. As soon as he left with the truck keys, the clouds burst open and dumped a ton of water. Then a small hurricane came down the street. Strongest winds in history, I’m pretty sure.

An aide covered my class while I ran out with plastic garbage bags to cover up the float as best I could. Imagine, if you will, half a dozen freshmen running after a giant black “bomb” rolling out of the parking lot and down the street, shredding and shedding its plastic shell as it bounced along, stopping traffic along the way.

It would seem that in order to get the black plastic completely around the bottom of the sphere an enthusiastic but not mechanically minded kid had cut the straps holding the ball down.

The float committee was so demoralized they gave up trying to fix it. Dejectedly, they all went back to class except for the committee leader. She had a vision and by golly she was going to see it happen!

After school I picked up my three biological children from the rival high school across town. The Roubal family pitched in to help the chairman put it back together. “I can’t believe we’re building a float for our enemies!” my son said as he kept working the duct tape.

That evening, after the JV game, the four class floats lined up behind the stadium. The young students dressed in school colors were excited as they climbed aboard. They couldn’t believe the bomb was back on the trailer. I was there to wave good bye and wish them luck.

The truck driver ran up holding his two-year-old son minutes before the parade was to start. He told me I could either drive the giant truck and trailer or hold his toddler on my lap. All of a sudden, I was in the parade too.

As we rolled slowly towards the track, I heard the kids shouting. The generator wouldn’t start! The plastic wrap was slipping off! The kids were frantically pulling the starter rope. Laughter roared from the stands. Then the student emcee laughed over the loud speaker “This class thinks it’s “the bomb”! To my astonishment, the crowds started booing as the freshmen float limped by. The truck driver and I shook our heads in sad disbelief.

Half way around the track a brilliant light filled the truck cab. I turned to look and the marquee was flashing! The ‘fuse” was lit! They even had the loudspeaker on playing their chosen song. The freshmen were all smiles and began dancing. A loud roar rolled out over us from the crowd. Hurrah! It was a “Rocky” moment of triumph.

Then the toddler peed in my lap and all was right the world.

“Adventure Awaits” at Alhambra’s 2019 Pixar themed Homecoming Celebration. The parade starts at 3pm this Friday, September 20. The route is down Alhambra Avenue, right on Main Street past the judge’s booth at Alhambra Creek.

Don’t be square. Be there! It’ll be the bomb!